Did you know that the Whetstonian was originally a juke joint called the Stardust Club? Completed in 1927, during the 1930s and through the 1950s, several jazz and blues musicians played here during LaVilla’s heyday. By the time the building had been purchased by Walter Whetstone, it had been divided into a bar, restaurant and pool hall. Whetstone saved the building from demolition by buying it and turning it into his personal museum of things he collected throughout his lifetime. According to Jax Psycho Geo, Whetstone called the building the Whetstonian because, “If Smithson can have his Smithsonian, then Whetstone can have the Weststonian” . 525 West Beaver Street was built for the Lawton Pratt Funeral Home in 1915-16. Located in LaVilla, the building may be one of the last commercial structures built by Joseph Haygood Blodgett that survives today.

Born in 1858 in Augusta, GA, Joseph Haygood Blodgett moved to Jacksonville during the 1890s with one paper dollar and one thin dime. Initially working for the railroad for a dollar a day, Blodgett went on to start a drayage business, a woodyard, a farm, and a restaurant before becoming a building contractor around 1898. Like Henry John Klutho, the Great Fire of 1901 changed Blodgett’s fortunes. With the city’s black population exploding in growth, Blodgett built 258 houses, keeping 199 to rent and eventually becoming one of Jacksonville’s black millionaires. Blodgett Villa, his own residence in Sugar Hill (upper right image), was said to be one of the finest owned by an African-American anywhere. Famed guests at Blodgett Villa included Booker T. Washington.

Built in 1909, the Richmond Hotel was once one of the finest hotels in Downtown Jacksonville for African-Americans during the Jim Crow era. Featuring 48 upper floor rooms, its famed guests included Duke Ellington, Cab Calloway, Ella Fitzgerald, and Billie Holiday. The Richmond closed for good in the early 1970s, following desegregation. Today, its street level retail spaces are occupied by Delo Studios, an art gallery, meeting and event space. However, the building’s former hotel rooms have largely sat empty and untouched over the past four decades.

The Richmond Hotel in 1942. (Courtesy of the Crisis Magazine)

318, 324 and 328 North Broad Street and adjacent storefronts, along with the Masonic Lodge and Richmond Hotel, combine to form nearly 400 linear feet of historic buildings still surviving as a part of what was the black side of Downtown Jacksonville during the Jim Crow era. When combined with the Masonic Temple and Richmond Hotel, they provide us with the only remaining visual example of what LaVilla’s urban density at street level resembled during its heyday.

Located at the southwest corner of Broad and Duval, 328 Broad Street (pictured above) was occupied by the Great Atlantic & Pacific Tea Company (A&P) in the 1940s. At the time, A&P was the largest grocery retailer in the country. Prior to A&P, Horace Clark Meats operated in the storefront.

In 1910, the black owned National Mercantile Realty & Improvement Company was located at 324 Broad Street (center building in photo above). By 1930, a local market chain owned by Clarence Saunders operated a market on the ground floor. The building was acquired by the City of Jacksonville in 1994 for $34,000. Since that time, the building has fallen into great despair.

Built around a frame house in 1909, 318 Broad Street is representative of the many buildings that once lined Broad between Bay and State streets, featuring hotel rooms or apartments upstairs and retail at street level. In 1910, Joseph Stone lived upstairs and operated a fish and meat market at street level. By 1913, the upper level had become the Will Hotel. Progress Furniture was the building’s tenant by 1940. For many years it served as the warehouse for Deloach Furniture. Today, the building is for sale. 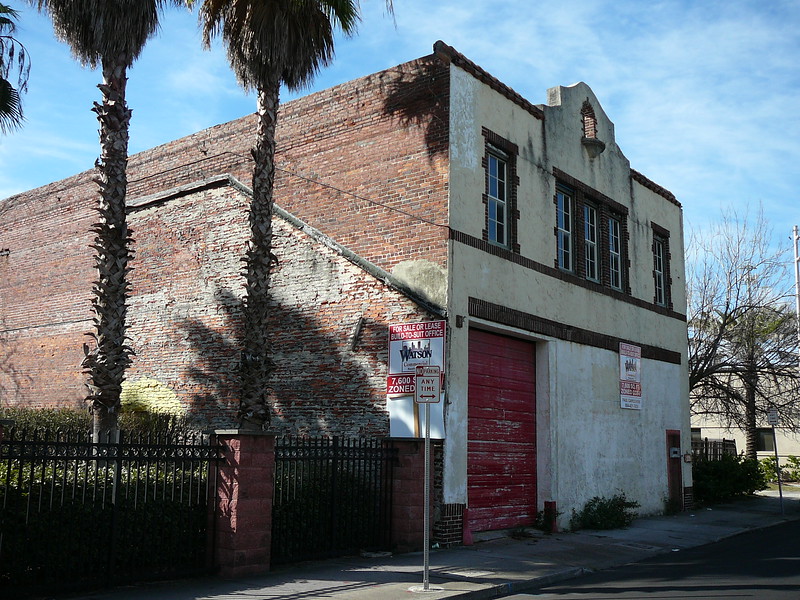 Following the arrival of the railroad terminal, West Adams Street transitioned into an environment filled with small hotels, businesses, and tenement housing catering to nearby wharves, rail terminals, and freight depots. Between Adams and the railroad terminal, a red light district emerged along Ward (Houston) Street. Dominated by bordellos, such as the New York Inn, Turkish Harlem, Senate, Spanish Marie, and The Court, the district became known as “The Line” with 60 bordellos. Along with hotels such as the Northern, Newport, and the Little Ritz, this setting created an economic opportunity for the laundry business, leading to LaVilla emerging as a concentrated location for Chinese-owned businesses and residences.

Despite the small but concentrated population, Chinese immigrants faced the constant threat of discrimination, including an incident in 1900 where 32 laundrymen were arrested and held in jail, facing deportation until they could prove that they were U.S. citizens. Unfortunately, LaVilla’s Chinese community ultimately succumbed to the Great Depression, strict immigration laws, and deportation.

Unlike the handful of buildings remaining on Ashley Street that harken back to the area’s emergence as a Jazz and Blues mecca, only an abandoned building that originally housed Fire Station No. 4 remains of a district that was once littered with Chinese-owned laundries and restaurants. Completed in 1914, this building served as LaVilla’s fire station until being replaced in 1944 by a larger station a few blocks north.

Completed in 1910, the Eagle Laundry Company was this building’s original primary tenant. Located in the heart of LaVilla’s immigrant Greek community, it also housed the Greek and Syrian Club by A.K. Carazar in 1915. For many years, it was occupied by the Hart Furniture Company. However, many may remember it as being the home of Club Kartouche during the 2000s. Club Kartouche was a nightclub known for Latin, rave, R&B, and hip-hop featuring the likes of Ludacris and Trick Daddy during Super Bowl XXXIX. Now one of the last buildings directly associated with Jacksonville’s lost early20th century Greek community could be on the chopping block. A Daily’s gas station and convenience store is now being considered for the entire block.

LaVilla’s red district originated in early 1887 as a result of Jacksonville mayor John Q. Burbridge chasing most of the city’s prostitutes to the suburb of LaVilla. Burbridge’s efforts were thwarted when Jacksonville later annexed LaVilla. With the January 1897 opening of Henry Flagler’s Jacksonville Terminal Company passenger railroad depot, LaVilla was rapidly engulfed in development, resulting the red light district growing and ultimately becoming known as “The Line”. In 1900, the district, then home to more than 60 bordellos on four blocks of Ward between Lee and Bridge streets. While The Line paved the way for LaVilla’s development into an early epicenter of ragtime, blues, and jazz, excluding 801 West Forsyth Street, its bordellos, flop houses, and saloons have been razed over the years.

Located on the corner of West Forsyth and Madison streets, this building once housed a saloon in the red light district that was owned and operated by black red light district businessman George Stevens. It later became the base for Bork & Sons, a bed springs company and the Southern States Iron Roofing Company. An adjacent structure, 825 West Forsyth Street, dates back to 1902. In 1915, the Jax Chero-Cola Bottling Company operated out of the structure. Chero-Cola was founded in 1905 as the Union Bottling Works by Claud A. Hatcher in Columbus, GA. Hatcher’s first beverages were named Royal Crown, a ginger ale and a cola called Chero-Cola. In 1912, the company’s name was changed to Chero-Cola. Over the years, the company’s name has changed and it is now known as Royal Crown Cola International.