A long razed residence associated with Eartha White with the characteristics of a Blodgett designed structure. Courtesy of University of North Florida.

Blodgett is a name that many in Jacksonville today likely associate with the former 654-unit Blodgett Homes public housing complex just northwest of Downtown Jacksonville. Constructed in the early 1940s and named in honor of Joseph Haygood Blodgett, for many years the public housing complex was once the city’s largest. As for Blodgett himself, his life and works are a quintessential example of a local rags to riches story.

Born into slavery in Augusta, Georgia, Joseph Haygood Blodgett (1858 - 1934) moved to Jacksonville during the 1890s with one paper dollar and one thin dime to his name. Initially working for the railroad for a dollar a day, Blodgett went on to start a drayage business, a woodyard, a farm and a restaurant before becoming a building contractor around 1898.

As with architects Henry John Klutho, Roy Benjamin, Rutledge Holmes and Mark & Sheftall, the Great Fire of 1901 changed the fortunes of Blodgett. With Jacksonville’s black population rapidly increasing during the city’s early 20th century rebuilding boom, Blodgett not only designed and built 258 houses, he kept 199 to rent, which eventually made him one of the city’s first black millionaires. Blodgett Villa, his own residence in Sugar Hill where famed guests such as Booker T. Washington visited, was said to be one of the finest owned by an African American anywhere. 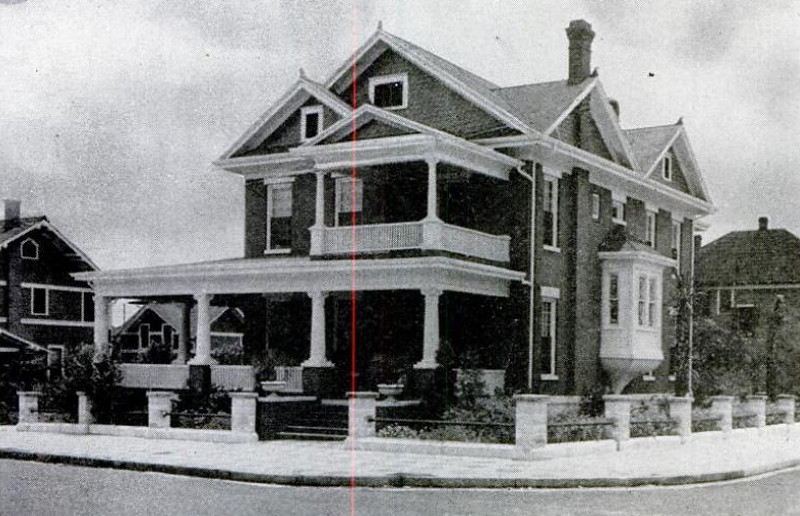 The residence of Mr. and Mrs. Lawton Pratt at 582 West 8th Street. Courtesy of The Crisis Magazine in 1942.

Blodgett’s design trademark was the inclusion of a small upper porch above a large lower porch that often extended around the side of a house. Philadelphia merchant John Wannamaker was astonished that a black man could accumulate such a fortune in the South without capital and a formal education. Most of Blodgett’s work was situated in the Sugar Hill neighborhood and largely lost to urban renewal efforts that included the creation of Interstate 95 and the expansion of UF Health Jacksonville’s medical campus.

While the majority of Blodgett’s work has been razed, shotguns designed and built by the early black architect can be found along Myrtle Avenue, just north of Kings Road. Serving a similar purpose to the rowhouse in Northeastern cities, the shotgun was the most popular style of housing in the Southern United States from the end of the American Civil War through the Great Depression.

Designed to provide a solution to urban overcrowding, shotgun houses were often built as rental properties near manufacturing centers and railroad hubs to provide affordable housing for workers. Shotgun houses tended to be narrow across the front in order to maximize the number of units on each residential lot. Running deep on the lot, rooms were typically arranged one behind the other connected by a long hallway. Because this long hall usually ran the entire length of the house, the name derived from the possibility of firing a round from the front door through the back door without hitting any part of the house.

Many of Blodgett’s shotguns can be characterized as being frame construction, 18 feet to 21 feet in width, with a front facade featuring a flat covered porch and box gabled roof distinguishing the triangular section more. This same box gabled roof served as a defining element on many of the larger Blodgett designed residences as well.

Abraham Lincoln Lewis Residence at 504 8th Street was said to be designed and built by Joseph Haygood Blodgett. Courtesy of The Crisis Magazine in 1942

The works of Joseph Haygood Blodgett following the Great Fire of 1901 are just as significant to the development of Jacksonville’s black communities as Henry John Klutho’s works were to Downtown, Riverside and Springfield. Blodgett not only provided housing for the working class black community during segregation, he also became the go-to architect for the development of upscale black neighborhoods like Sugar Hill. In hope of spurring the preservation of an important part of black Jacksonville’s historical story, here is a visual tour capturing the surviving architectural works of Joseph Haygood Blodgett. 525 West Beaver Street was built for the Lawton Pratt Funeral Home in 1915-16. Located in LaVilla, the building may be one of the last commercial structures built by Blodgett that survives today.