OUR Properties is in the process of making alternations and repairs to storefronts at 100 East Adams Street. The building was originally completed in 1926 for the United Cigar Stores Company. Hardwicks Bar will be opening in the storefront.

Rise, a Valdosta-based development firm, is in the process of constructing a new eight-story, 247-unit mixed-use apartment development at 960 East Adams Street in the Sports and Entertainment District. Called The Doro, the $35.6 million development will include a 284-space parking garage, 4,875 square feet of ground floor retail space and additional roof top amenities.

The First Baptist Church of Jacksonville continues to make progress on the $1.78 million renovation of the Ruth Lindsay Memorial Auditorium at 125 West Ashley Street. Originally built during the midst of a significant boom in membership, the 3,500 seat auditorium will be modernized as the church’s main sanctuary and worship center. It is anticipated that the project should be completed in early 2022.

The Thomas V. Porter mansion was designed by architect Henry John Klutho as a private residence and completed in 1902. It was acquired by JWB Real Estate Capital in August 2020. JWB is in the process of restoring the building to contain 16,000 square feet of single tenant office space. A 1,272 square foot basement will be reserved for restaurant space when the market can support it.

7. The Villages of Cathedral

The restoration of four Cathedral District multifamily properties continues at 505 North Liberty Street after being acquired for $365,000 in April 2020. Constructed in 1909 and 1910, active building permits for The Villages of Cathedral LLC. indicate the proposed residential use will accommodate multiple families. Construction continues on a new 162,000 square foot headquarters building for JEA. The $68 million project at 325 West Adams Street will include a 657-space parking garage with 10,690 square feet of ground level retail space.

Construction continues on the transformation of an 1.02-acre surface parking lot at the northwest corner of East Ashley and Newnan Streets into an affordable housing development for residents aged 62 years old and up. A joint venture between Tampa-based Blue Sky Communities, LLC. and Aging True, the $15 million project will include the construction of a six-story, 120 unit residential structure and 160-space parking garage.

The City of Jacksonville is in the process of adding several new docks locations along the St. Johns River throughout the urban core, including San Marco’s Riverfront Park and the Northbank Riverwalk in Brooklyn. 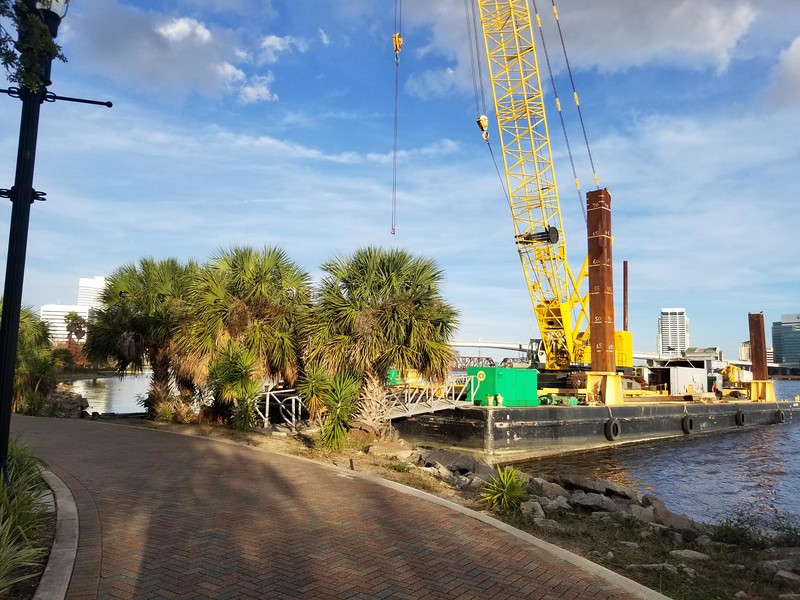 Construction on Southerly at Southbank is near completion. Developed by Geismar, LA-based Ventures Development Group, LLC., Southerly is a seven-story, 84-foot-tall structure with 185 luxury apartment units at 959 Prudential Drive.