The long-demolished Downtown Temple location at Laura and Ashley Streets.

Formally chartered in 1882, Congregation Ahavath Chesed is the oldest synagogue in Jacksonville and one of the two oldest in Florida. Originally located at the intersection of Laura and Union Streets in downtown Jacksonville, a larger structure was completed at the intersection of Laura and Ashley Streets in 1910. In 1927, the congregation purchased a building that was designed by famed local architect Henry John Klutho in Riverside. Constructed in 1907, this structure was destroyed by fire in 1940. As a result, a new Riverside synagogue was dedicated in 1950. In 1979, Congregation Ahavath Chesed dedicated a new house of worship at their current location in Mandarin. Following the synagogue’s relocation, the Riverside Temple was renovated into The Avenues condominium complex.

A July 15, 1946 postcard of Cohen Brothers. At the time, The Big Store was the largest department store in the state of Florida. (State Archives of Florida/Spottswood) The opening of the Jacksonville Landing proved to be the final nail in the coffin of downtown’s May Cohen’s flagship department store. During the 1990s, the former downtown store was converted into City Hall. In 2005, the remaining stores in the May chain were converted into Macy’s.

Now the location of Jacksonville’s City Hall, the St. James Building was originally constructed as the Cohen Brothers, The Big Store. Cohen Brothers was established by brothers Samuel and Morris Cohen in 1867 and originally housed in a small log cabin on Bay Street. Under the direction of younger brother Jacob Cohen, the business grew to become an anchor pulling the retail core of downtown from Bay Street to James Weldon Johnson Park. The younger Cohen himself would end up being known as the “Wanamaker of the South.”

Known as the “Big Store”, the Cohen Brother’s massive department store at 117 West Duval Street, was the 9th largest in the country when it opened its doors on October 21, 1912. With nearly 330,000 square feet of space during its heyday, the store dwarfed the average 186,000-square-foot Walmart Supercenter. In 1959, Cohen Brothers was acquired by May Department Stores and rebranded as May-Cohens. During the 1980s, with downtown in decline, the “Big Store” fought a valiant fight for its survival, outlasting all of downtown’s former grand department stores. However, with the opening of the Jacksonville Landing siphoning retail traffic to the riverfront, the department store’s doors closed permanently in July 1987. 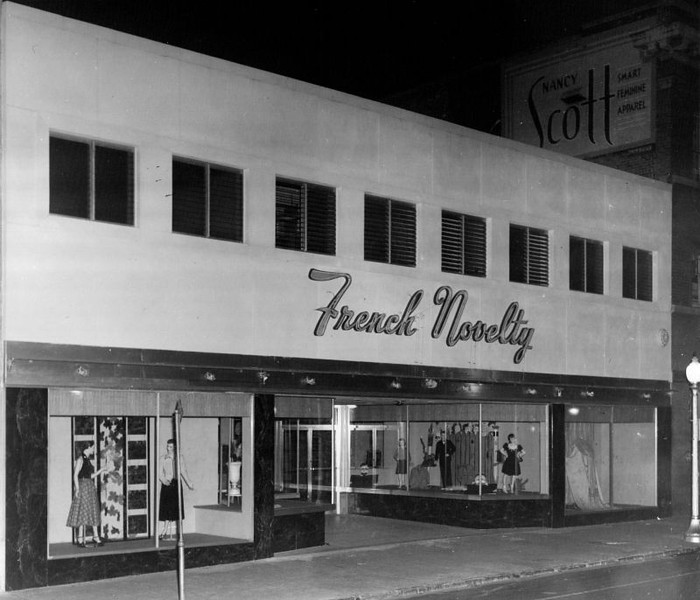 The French Novelty was founded by Salim Mizrahi in 1911. Then known as the S. Mizrahi & Company, the first store was located in Downtown Jacksonville and specialized in fine handmade blouses, linens and ready-to-wear garments. Named French Novelty due to many items being imported from France, then considered to be the fashion capital of the world, a second store opened during the 1920s. Today, the French Novelty is owned and operated by a grandchild of the original owner and is located in the Cedar Hills Shopping Center at 3520-4 Blanding Boulevard. Now in its 111th year of existence, the business has a reputation for unique, quality fashions, incredible values, and excellent customer service. 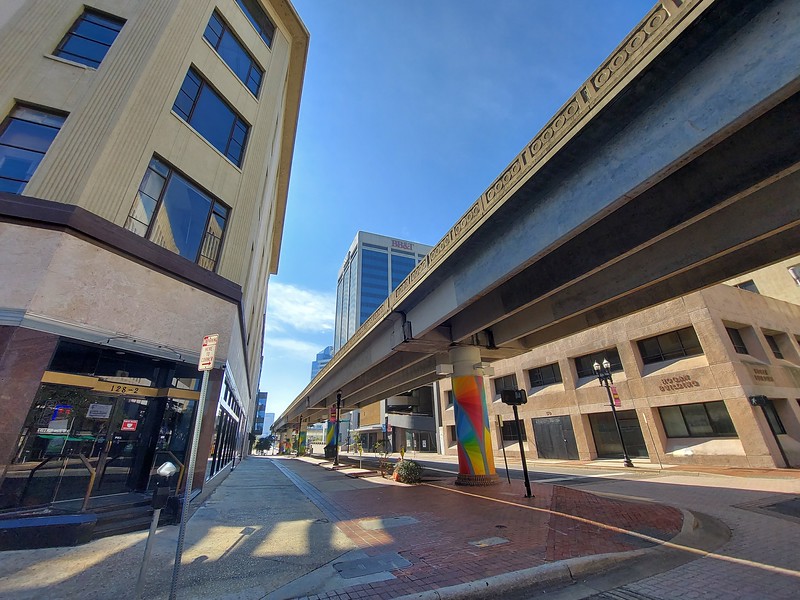 Furchgott’s was a longtime Jacksonville institution and retail destination founded in downtown Jacksonville by Leopold Furchgott in 1868. Its flagship store opened on October 8, 1941 at the intersection of West Adams and Hogan Streets. Designed by Marsh and Saxelbye, the five-story, 65,000 square foot store at 128 West Adams Street was the first in Jacksonville to have elevators. Its first floor was said to be as American as cheese and apple pie.

According to Furchgott’s executives, the Art Deco store was a “scientifically-designed” structure created for the customer’s shopping pleasure and convenience. Over the years, the store grew into a chain with the opening of additional locations at suburban shopping malls. Falling into bankruptcy during the 1980s, Furchgott’s closed this flagship location for good on March 31, 1984. Promising to eventually reopen a smaller one-story store in the space, plans failed to materialize by the time the chain closed for good on May 8, 1985.

Designated as a Local Jacksonville Landmark, developer Lotus Commercial USA intends to renovate the structure into forty one and two-bedroom apartment units on the upper floors, retail, office, and amenity spaces at ground level, and amenity and storage facilities in the basement. 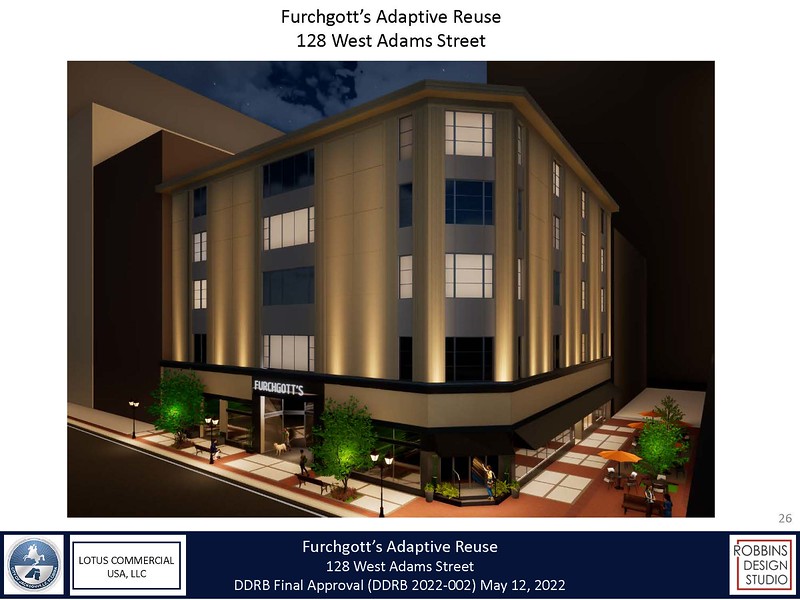 A rendering of the proposed Furchgott’s adaptive reuse project. (Downtown Development Review Board)

Levy/Wolf at Hogan and Adams Streets in the early 1980s. (City of Jacksonville Historic Preservation Office)

Levy’s Department Store was founded by Benjamin S. Levy in 1912. Originally located at Bay and Hogan, Levy completed construction on this four story department store in 1927. Levy’s had a reputation for carrying some of the most exclusive and luxurious merchandise, and billed itself as the store “where the styles are shown first.” During the mid-20th century Harold Wolf served as the company’s president. After his departure in 1969, the store was renamed Levy/Wolf. After 57 years of operation at the intersection of Adams and Hogan Streets, Levy/Wolf closed in July 1984. Today, the former department store building is used as an office building. Rosenblums at the corner of Adams and Hogan Streets on September 23, 1938. (State Archives of Florida/Spottswood)

Frank Rosenblum founded Rosenblum’s in 1898 in downtown Jacksonville, selling pots, pans and linens from a horse and buggy. After the Great fire in 1901, Rosenblum opened one of the first men’s clothing stores in the city at Duval and Main Streets. In 1937, the store relocated to the intersection of Adams and Hogan Streets, becoming a luxury retailer competing directly with adjacent department stores. Rosenblum’s would remain a downtown fixture until closing the Adams Street location in 1981 and focusing on their suburban stores. 124 years after its founding, Rosenblum’s lives on as a fourth-generation family owned business with store locations in San Jose and Jacksonville Beach.

The northeast corner of West 3rd and Silver Streets serves as a silent example of Springfield’s rise, fall and rebirth. With the neighborhood rapidly transforming into an epicenter of Jacksonville’s Jewish community in the early 20th century, this spacious plot of land overlooking Springfield Park was acquired by Congregation B’nai Israel. Chartered in 1905, B’nai Israel had outgrown their Synagogue located at Duval and Jefferson Streets in LaVilla. Upon completion of the new two-story sanctuary, the Congregation B’nai Israel assumed a new identity for itself as the Jacksonville Jewish Center and shifted from Orthodox to Conservative Judaism. As Springfield continued to expand, so did the Jacksonville Jewish Center. Expanding over the years to meet the needs of the growing congregation, by 1959, the religious campus included a chapel, library, social hall, school, playground, auditorium/gymnasium, banquet facility, bridal lounge, meeting rooms and offices.

Like many established urban communities of the era, Springfield began to decline after the end of World War II. In 1963, seeking larger and greener pastures, the Jacksonville Jewish Center purchased land in Mandarin. Periodically expanding their Mandarin campus over the next decade, the incremental relocation from Springfield was completed when Center dignitaries carried Torah scrolls from the ark in Springfield to their new home on San Jose Boulevard on Sunday, January 11, 1976.

Between the late 1970s and early 2000s, the property was utilized by the Jacksonville Job Corps as a facility to train and educate high school dropouts. On April 25, 2011, the campus lost its synagogue to fire. However, the rebirth of Springfield has led to the possibility of the Jacksonville Jewish Center site being activated once again. Today, Tampa-based GNP Development Partners, LLC. intends to transform the 2.13-acre property into a mixed-use multi-family development called Springfield Lofts. A rendering of the Springfield Lofts (GNP Development Partners, LLC.)

The original Orthodox congregation, B’nai Israel (Sons of Israel), was chartered in 1905. In 1909, the Synagogue at Duval & Jefferson Streets in LaVilla was dedicated. Replaced by Springfield’s Jacksonville Jewish Center, it was demolished in 1975. (Ennis Davis, AICP)

During the late 19th century, a small Eastern European Jewish ethnic enclave was established in Jacksonville. During the 1880s, Yiddish speaking Jewish immigrants from Russia and Romania arrived in Jacksonville, primarily living and working in LaVilla. Centered around the Orthodox synagogue Congregation B’nai Israel at the intersection of Duval and Jefferson Streets, this community largely relocated to Springfield after World War I. Despite urban renewal, elements of this early Jacksonville ethnic enclave have survived.

The Maceo Elks Lodge at 712 Duval Street West was originally built in 1914 as the Young Men’s Hebrew Association building. Along with an adjacent synagogue, it served as the epicenter of LaVilla’s early Jewish community.

For many years, LaVilla was home to the popular Worman’s Bakery and Delicatessen, which operated at 204 North Broad Street from 1939 to 2009. Today the Maceo Elks Lodge #8 at 712 West Duval Street, is the last surviving institutional building in LaVilla associated with its early Jewish community. Completed in 1914, the building was originally constructed as the Young Men’s Hebrew Association. The purpose of the organization was to perpetuate Judaism as a positive aspect in community life through health, education, recreation, democratic training, and informal education in Jewish tradition.

In addition, twin residential structures at 316-318 and 320-322 North Jefferson Street are a few of the last remaining residential structures linked to LaVilla’s Jewish heritage. Built between 1901 and 1903, the two family flats were once home to the family of Benjamin Safer. Safer arrived in Jacksonville around the turn of the century and was the first to open a kosher meat market in Jacksonville. Safer was also very instrumental in establishing the Orthodox Congregation B’nai Israel and the Jewish enclave that developed around it.

316-318 and 320-322 Jefferson Street are two of the few remaining houses in LaVilla built immediately after the Great Fire of 1901. By 1914, the identical two family flats were occupied by members of the Safer family. Benjamin Safer was the first family member to arrive in Jacksonville from Lithuania around the turn of-the-century. Evergreen Cemetery is the oldest cemetery in Jacksonville that’s still in operation, and one of the city’s great historic spaces. Evergreen Cemetery was founded in 1880 by a group of local businessmen and philanthropists hoping to create a “necropolis,” a city of the dead, which would have space for anyone in the city. Since the first burial in 1881, Evergreen Cemetery has been the final resting place of Jaxsons from every imaginable walk of life. Virtually every ethnic and religious group in Jacksonville is represented in the cemetery.

Located in Evergreen, the Temple Cemetery was originally carved out as a separate cemetery for Congregation Ahavath Chesed (also known as simply “the Temple”). Founded by a group of local Jews mostly from Prussia and Eastern Europe, the congregation embraced Reform Judaism in the 1890s and is today Northeast Florida’s largest synagogue. In the early 20th century, a small section of the cemetery, separated only by an unpaved road, was designated for B’nai Israel, now known as the Jacksonville Jewish Center. A Conservative Jewish congregation, the Center traces its origins to 1901. The graves of many of the congregation’s founders are located here in the Old Center Cemetery; today, the congregation also operates a larger cemetery to the northwest, and serves as caretaker for a section designated for the now-defunct Congregation Beth Shalom.

Just before the beginning of World War I in Europe, Morris David Wolfson relocated his family from St. Louis to Jacksonville. A Lithuanian immigrant, Wolfson found success in the scrap metal industry. The loss of his one-year-old son led Wolfson to announce his plans to create a children’s hospital. However, Wolfson passed before his dream was realized. Sons Samuel and Louis Wolfson brought their father’s dream into reality by helping establish the Wolfson Children’s Hospital at Baptist Medical Center Jacksonville in 1955. Today, Wolfson Children’s Hospital is a nationally ranked, non-profit, pediatric acute care hospital and the only children’s hospital in the Baptist Health system.