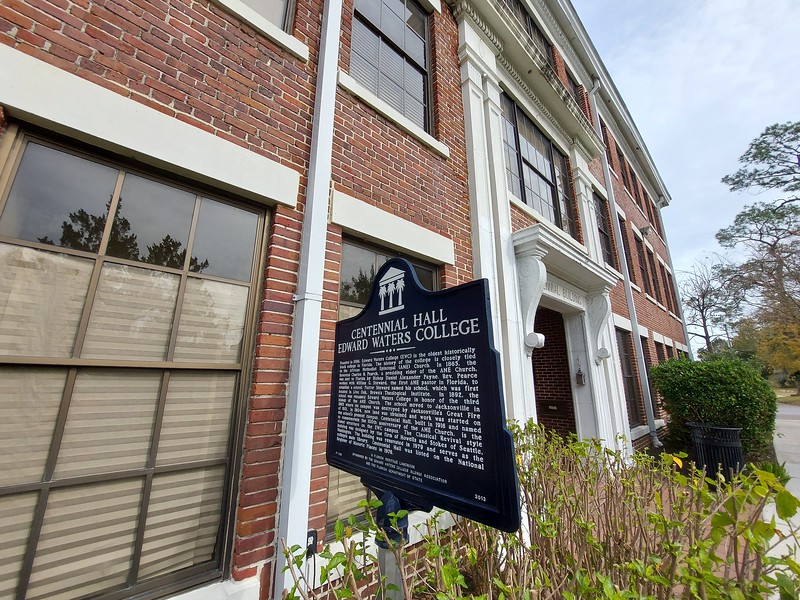 Edward Waters University was started by Bishop Charles H. Pearce in 1866 to educate the former enslaved, especially those desiring to enter African Methodist Episcopal (AME) church ministry. Originally known as the Brown Theological Institute, it was located in Live Oak, Florida. After financial difficulties, the school was relocated to Mt. Zion AME in Downtown Jacksonville in 1889 and the name was changed to Florida Normal Scientific and Divinity High School. In 1892, the name was changed to Edward Waters College in honor of the third bishop of the AME church. By this time, the school had relocated to Downtown Jacksonville.

Situated on East Beaver Street in the Black Bottom, the original Jacksonville campus was destroyed during the Great Fire of 1901. This disaster led to Edward Waters acquiring the current site in 1904 and establishing a new campus here by 1908. During the first half of the 20th century, several neighborhoods including New Town, Durkeeville and College Gardens grew up around the former rural school site. In 1960, it gained four-year college status and began to offer BA degrees. Notable alumni over the years include Civil Rights leader A. Philip Randolph, former Florida State Senator Betty Holzendorf (D-Jacksonville), Negro League baseball player Buck O’Neil, former Jacksonville sheriff Nat Glover and former U.S. Representative Corrine Brown.

There are 1,025 enrolled students at Jacksonville’s only university with a historic urban core campus. Working to expand its undergraduate studies and offer master’s programs, Florida’s oldest Historically Black College recently became a university. Added to the National Register on August 8, 2022, Edward Waters University is located at 1658 Kings Road. Built on a former Sea Island cotton, sugar cane, and corn plantation, Ortega is named in honor of Josef de Ortega. Ortega was the judge advocate for East Florida, who approved the sale of the property to John H. McIntosh of St. Mary’s, Georgia in 1804. Ortega was acquired by John P. Sanderson in 1857 and had largely become a vacant and heavily wooded peninsula by the turn of the 20th century. With $50,000 borrowed from Gilded Age financier J.P. Morgan, U.S. Senator Wilkinson Call’s Ortega Town Company acquired the former plantation in 1902. Struggling with his health, Call sold the fledgling development to the Ortega Company in 1906.

By 1908, the Ortega Company had completed a wooden bridge across the Ortega River, connecting the tract to Riverside and Downtown. Founded by John N. C. Stockton and Charles C. Bettes, in 1909 the Ortega Company began development of Ortega as a streetcar suburb designed by prominent local architect Henry J. Klutho. Considered to represent an early manifestation of the City Beautiful Movement, Klutho’s design incorporated four circular parks named after New World explorers with radiating streets that ran to the peninsula’s waterfronts. Situated on a heavily wooded peninsula at the confluence of the St. Johns and Ortega rivers, Klutho created housing tracts that took advantage of the unusual terrain and land shapes. As an incentive to purchase home sites, the Ortega Company promised no taxes and free water for a certain time period.

During the height of the 1920s Florida Land Boom, Ortega emerged as a popular residential destination. More than 95 percent of all buildings in the Old Ortega Historic District were originally constructed as single-family dwellings. It contains a wide variety of residential architectural styles including Frame and Masonry Vernacular, Mission, Craftsman Bungalow, Mediterranean Revival, Colonial Revival, Minimal Traditional, Tudor Revival, and Prairie. With 601 contributing and 237 non contributing sites, the Old Ortega Historic District was added to the National Register of Historic Places on July 14, 2004. Riverside was platted in 1868 by Boston’s John Murray Forbes and Florida Times-Union editor Edward M. Cheney. Carved out of the former Dell’s Bluff Plantation, the land that became Riverside was acquired for $10,000 in gold. Riverside remained sparsely populated until the completion of a mule-drawn streetcar in the vicinity in 1886. Efficiently connected with downtown, the neighborhood was engulfed by growth after the Great Fire of 1901 and the 1908 extension of the streetcar system to Ortega. During the height of the 1920s Florida Land Boom, residences around the intersection of Park, Lomax and Margaret Streets began to give way to commercial development now recognized as Five Points.

Riverside Avenue is home to one of the largest concentrated collections of Prairie School residences outside of the Midwest. Originating in Chicago, Prairie School was an attempt in creating an indigenous North American style of architecture related to the ideas and aesthetics of the Arts and Crafts Movement of the late 19th and early 20th century. Characterized by horizontal lines, windows grouped in horizontal bands, and flat or hipped roofs with broad overhanging eaves, the architectural style came to Jacksonville when young architects influenced by the likes of Frank Lloyd Wright and Louis Sullivan, moved to the city to help rebuild after the Great Fire of 1901. Roughly bounded by the CSX railroad line, Riverside and Memorial Parks, the St. Johns River, and Seminole Road, Riverside was listed on the National Register as a historic district on March 22, 1985.

Dating back to 1869, the Springfield Historic District is home to some of Northeast Florida’s best examples of 19th and early 20th century architecture. Named after a spring that once flowed near present day West 4th Street, Springfield was initially advertised as a planned Jacksonville suburb by John H. Norton, one of the city’s first professional developers. Development was slow to materialize until the 1879 construction of a horse-drawn streetcar line between downtown and 8th Street and the formation of Samuel Hubbard’s Springfield Development Company in 1882.

During the Gilded Age, Jacksonville became a popular winter tourist resort for the rich and famous. Springfield developed into a major benefactor, as its streetcar line resulted in the development of a skating rink, dinner halls and restaurant in 1884, followed by the 1888 opening of the Sub-Tropical Exposition and the city’s first zoo in 1893. However, disasters in the form of yellow fever and the Great Fire of 1901 laid the foundation of Springfield’s transformation from a tourism center into a walkable mixed use neighborhood.

Spared by the fire by Hogans Creek and home to the city’s first electric streetcar line, residential construction boomed along the Springfield’s streets and industrial development sprouted up along its railroad lines. By the time of the 1920s Florida land boom, the neighborhood had already been built out, preserving its diverse collection of late 19th and early 20th century architectural styles and mix of uses. On January 22, 1987, the neighborhood was officially listed on the National Register of Historic Places. In 2010, Springfield was recognized by Southern Living Magazine as the number one “comeback” neighborhood in the South, due to a resurgence of interest and redevelopment.