I’ve enjoyed watching The Black Church: This Is Our Story, This Is Our Song featuring Henry Louis Gates, Jr. A PBS Black History Month special that can be seen locally on Jax PBS, it explores the 400-year-old story of the Black church in America, the changing nature of worship spaces, and the people who shepherded them from the pulpit, the choir loft, and church pews. As the largest city in the Gullah Geechee Cultural Heritage Corridor, the Black church has and continues to play an important role in the Jacksonville we know today. Community, social and educational centers at a time when African-Americans weren’t allowed at these types of spaces, there no Blues, Jazz, R&B, Chitlin Circuit, historically Black colleges or Civil Rights Movement without the contributions and influence of the Black church. With that in mind, here are few historical sights and scenes from a few of the oldest Black church congregations in Jacksonville.

Founded in 1838, Bethel Baptist Institutional Church is the oldest Baptist congregation in Jacksonville. Its original members comprised a plantation owning family and their enslaved. By 1859, the congregation had grown to 250 Black and 40 White members. After the Civil War, white members desired a white only congregation and took the formerly enslaved to court to have them dispossessed, but the Reconstruction era judge awarded the church to the formerly enslaved. This resulted in the white members going on to form the Tabernacle Baptist Church, which eventually became the First Baptist Church.

Located in Hansontown, the church was destroyed during the Great Fire of 1901. In 1904, a new large sanctuary was completed that combined elements of Greek Revival and Romanesque Revival architecture. With nearly 12,000 members, this megachurch has played a significant role in the history and development of Black Jacksonville, including being the launching ground of the Afro-American Life Insurance Company in 1901. In addition, noted Harlem Renaissance author and folklorist Zora Neale Hurston was a member during her time here in Jacksonville. 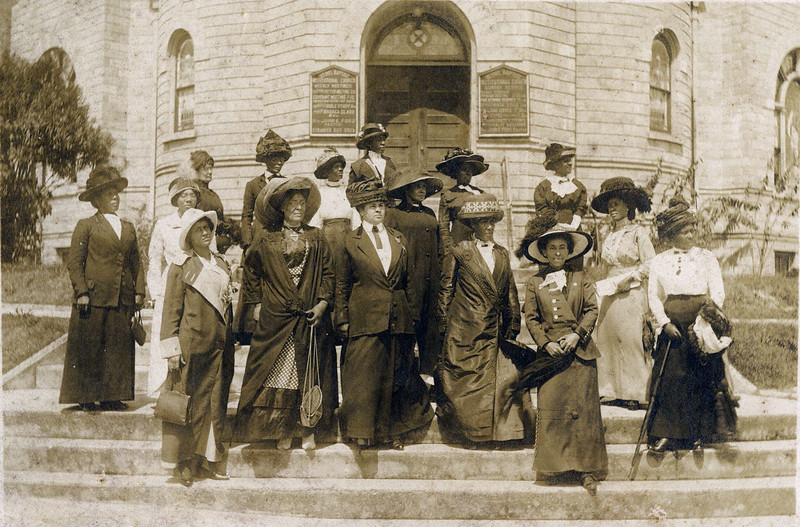 Taken in 1925 in front of Bethel Baptist Institutional Church, Margaret Murray Washington (center) of Tuskegee, AL. Washington was known as great anti-lynching activist. She was credited for co-founding the National Association of Colored Women in 1896. Thanks to the University of North Florida Special Collections and University Archives for the historic images. Black soldiers are led into the sanctuary of Bethel Baptist Institutional Church by Eartha White during World War II. Thanks to the University of North Florida Special Collections and University Archives for the historic images.

The Second Missionary Baptist Church was established on the northwest side of LaVilla in 1848. The church’s founders once worshiped with their enslavers at Bethel Baptist, before organizing a place of their own. The congregation’s original wood frame church was destroyed in the Great Fire of 1901. Serving as a refuge and source of strength during segregation, its members provided critical support to Brewster Hospital, Jacksonville’s first Black hospital. A brick structure first completed in 1930 under the leadership of Rev. King David Britt was designated as a local historic landmark in 2014.

Located in the Eastside, Mother Midway is known as the “mother” of the Florida Conference of A.M.E. church that was organized in 1867 and also the East Florida conference in 1877. Organized on June 10, 1865, a few weeks after the Confederate Army surrendered to the Union in Florida, it is the first Black independent church established in Florida. While the original building (left) no longer stands, the congregation has been in continuous existence since its founding.

The Mt. Zion A.M.E. Church was founded on July 28, 1866 by formerly enslaved who organized a society for the purpose of religious worship. Acquiring land at the intersection of Beaver and Newnan Streets before emancipation, the church had built a 1,500 seat sanctuary prior to the Great Fire of 1901. The current Romanesque Revival structure was built between 1901 and 1905 to replace what the fire destroyed.

The Eastside’s Mount Olive A.M.E. Church was organized in 1868 and housed in a brush arbor. Pictured in 1968 and located at the intersection of Pippen and Franklin streets, this sanctuary was designed by Richard L. Brown and built in 1922. Born into slavery, Brown eventually became Jacksonville’s first black architect. Since Asa Philip Randolph’s father would preach at rural AME congregations across Northeast Florida on a regular basis, his mother Elizabeth Robinson Randolph was a member of the Eastside’s Mount Olive AME Church at the northeast corner of Pippen and Franklin streets. At the time, Joseph Edward Lee, Jacksonville’s first black attorney and one of the state’s most influential men during Reconstruction also served as a minister. A captivating orator, Lee was powerful national political force for five decades, acting at various times as a state legislator, attorney, federal customs collector, and educator. At Mount Olive, a young Asa Philip Randolph studied Lee’s deliberate, quiet speech and diction. These would become traits he would use later in life as a union and Civil Rights leader.