The City of Jacksonville is in the process of reviewing permit applications for the adaptive reuse of the Independent Life Building at 233 West Duval Street. Proposed by Augustine Development Group, the 165,000 square foot office tower will be converted into a $30 million mixed-use project that will include 135 market rate apartments, a 21,000 square foot grocery store/food hall and 10,000 square foot rooftop lounge and restaurant. Construction is anticipated to begin in early 2021 with a mid 2022 completion.

Construction is underway on a proposed $68 million headquarters for JEA. The 162,000-square-foot building and adjacent 657-space parking with 10,690 square feet of retail is being developed on a former surface parking lot bounded by Adams, Julia, Monroe and Pearl Streets. 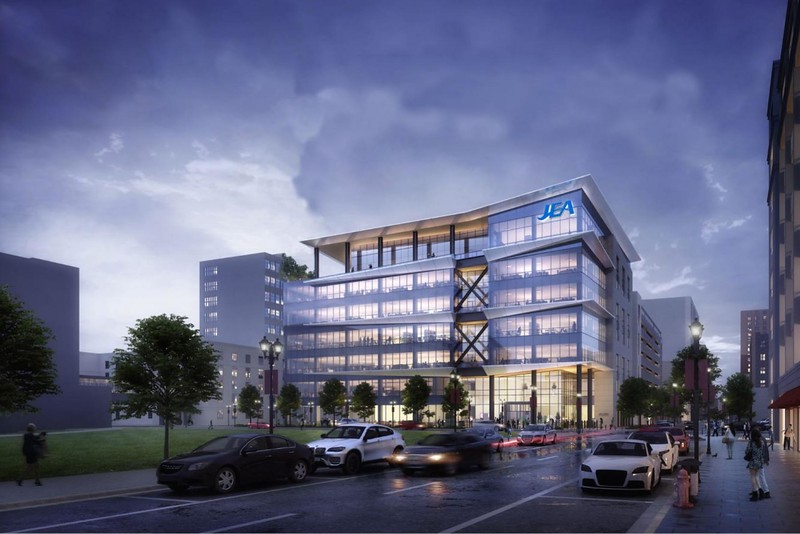 SouthEast Development Group LLC plans to break ground on a $70 million restoration of the former Florida Life, Bisbee and Marble Bank buildings. Plans include a 145-room Marriott hotel, full service restaurant and bar, a 4,000 square foot grocery bodega and 4,000 square feet of additional retail space. A second phase could include the addition of a ten floor residential structure between the Bisbee Building and a parking garage on West Forsyth Street. The project’s first phase will go before the DDRB for conceptual review in March. Construction could begin this summer.

The former Life of the South Building at 100 West Bay Street is in the process of be revamped to become a part of VyStar Credit Union’s new downtown corporate office. When completed, the 73,000 square foot building will house 200 to 300 lending specialists and rooftop bar. The ground floor space is in the process of being modified into a retail location for Peterbrooke Chocolatier and Bread & Board Provisions.

The restaurant will occupy approximately 5,000 square feet of the retail space on the ground floor, with the remaining 2,200 hosting the marketplace. The marketplace “will feel uniquely Florida in its design and ambiance,” according to the press release, with reclaimed local wood, a coastal-inspired color palate, and communal seating along with typical restaurant tables. A breezeway outside the building will accommodate outdoor seating, and the space will include a large kitchen for lunch traffic and catering orders.

Designated local historic landmark in 1995, the Central Fire Station was built in 1902, a year after the Great Fire. Now Iconic Real Estate Investments intends to move forward with an adaptive reuse of the building. The plan is to convert the two-story, 9,600 square foot building to a mixed-use development for a ground floor restaurant and second floor office space. DDRB conceptual approval was granted in December 2020.

Construction has begun to transform a 1.02-acre surface parking lot at the northwest corner of East Ashley and Newnan Streets into an affordable housing development for residents aged 62 years old and up. A joint venture between Tampa-based Blue Sky Communities, LLC. and Aging True, the $15 million project will include the construction of a six-story, 120 unit residential structure and 160-space parking garage.