Is This Déjà Vu?

An example of the lost density experienced in the Northbank is illustrated in this image of Downtown in the 1950’s. The structures highlighted in yellow no longer exist.

Between 2009 and 2010, the Mayor’s office wanted to use $25 million in taxpayer money to enact the Metropolitan Park Redevelopment Project. The project would have made improvements to the Kids Kampus waterpark, construct a Children’s Discovery area, create a new entry plaza and provide “flex spaces” for both passive and programmed uses including festivals, boat shows, concerts and other events. The plan would also widen 2,950 feet of the existing sidewalk on Gator Bowl Boulevard from A. Philip Randolph Avenue to East Duval Street, and proposed to construct an elevated crosswalk above Gator Bowl Boulevard connecting Metropolitan Park with the parking lots adjacent to what’s now TIAA Bank Field.

A rendering of the Metropolitan Park Redevelopment Project proposed in 2009

At the same time, City Council was deliberating raiding the City’s Downtown Historic Preservation Trust Fund to help facilitate the private purchase of an existing surface parking lot, to satisfy a decades-long (and disputed) obligation to provide additional, dedicated parking for the Jacksonville Landing.

Ultimately, Kids Kampus was ripped out in favor of grassy fields (“flex spaces”), new sidewalks were constructed within Metro Park to improve pedestrian access to the existing marina (which also received deferred maintenance upgrades) and sidewalks along Gator Bowl Boulevard were widened. Most of the planned improvements never panned out, and the rest of the money was transferred to fund other projects… including the 2014 construction of a private parking garage adjacent to the then-Suntrust Tower. The Jacksonville Landing never received an additional, dedicated parking facility. 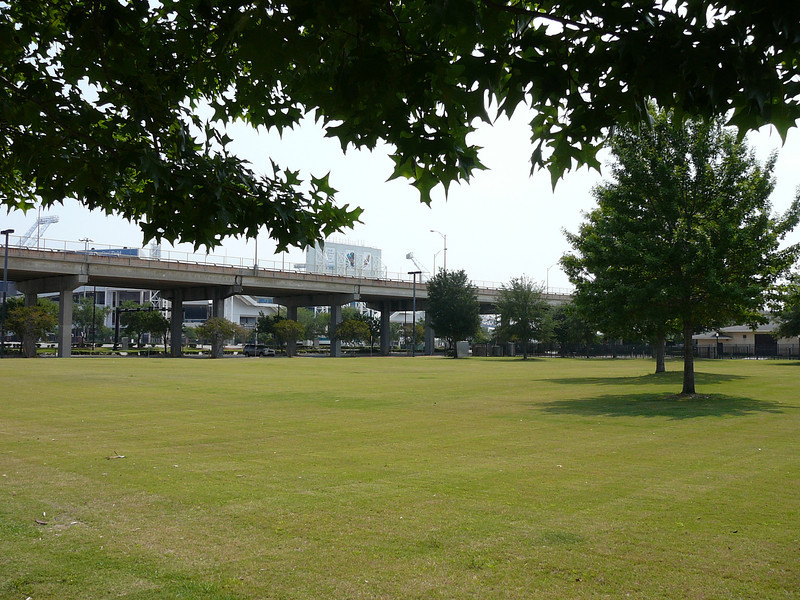 As the two branches of local government wrestled with competing Downtown development investment interests, the pervasive question centered around where public dollars should be directed in order to get the most “bang for the buck” in regards to revitalization of the urban core. The issues facing Downtown a decade ago, are the same issues still being wrestled with today.

The 2009 “Rethinking and Remaking Downtown” report published by Downtown Vision offered analysis that is particularly poignant today. Should economic development and public incentives be spread throughout the larger “Downtown” area, or should the bulk of focus be on encouraging re-development in the Northbank?

Here are some excerpts:

The terms “urban core,” “walkable core” or “core” refer to the walkable area of Downtown Jacksonville consisting of approximately 25 blocks on the Northbank centered on Laura Street, plus the Southbank Riverwalk and Friendship Fountain area, which is accessible to pedestrians via the Main Street Bridge and water taxi. The core contains the three major “nodes” of Downtown activity: The Jacksonville Landing/Times-Union Center for the Performing Arts; the Hemming Plaza government and cultural center; and the emerging entertainment district around Bay, Forsyth and Adams Streets, anchored by the Florida Theatre.

The “walkable” core is what people mean when they refer to Downtown. When people talk about Downtown, and their negative perceptions of Downtown, they are not talking about the Sports Complex, LaVilla, most of the Southbank or Riverside Avenue - they are talking about the walkable Northbank core of Downtown and the Southbank Riverwalk and Friendship Park, which are easily accessed by pedestrians from the Northbank via the Main Street Bridge and water taxi. This is the “core” referred to in this paper. Similarly, most people consider the Sports Complex, LaVilla and Riverside Avenue/Brooklyn as adjacent neighborhoods that one has to drive to from the core.

According to a 2006 survey by Downtown Vision, 37% of Downtown visitors will only walk one or two blocks, 37% will walk three or four blocks, and only 25% will walk more than four blocks. Our urban core is separated from both our convention center and our sports venues by approximately three-fourths of a mile - in opposite directions. The resulting isolation of these areas of activity has prevented development of the “critical mass” needed to engage secondary development of supportive retail, restaurant and entertainment venues.

During the past ten years, more than $1.1 billion in development has taken place in Downtown, of which less than one third was in the urban core.

We’ve overestimated the impact of projects outside the core. During the past two decades, we have overestimated the impact that development outside the core has on the core of Downtown. For example, the redevelopment and in-fill development in LaVilla and Riverside Avenue/Brooklyn have improved the appearance of these areas, but they have had little impact on walkability, business, employment and activity in the core. Despite major development in the Sports Complex, Downtown has not experienced the desired spinoff effects on nightlife and other activity in the core (or even at the Sports Complex). Downtown club owners indicate that, with the exception of Florida-Georgia weekend and certain events at Veterans Memorial Arena, activities at the Sports Complex have had little impact on their business volume.

Scatter-shot development has not been successful. Jacksonville has one of the largest downtowns in the country among cities of comparable population. Spreading our investment over too large an area has resulted in several problems: 1) public investment has been diluted over a large area and the core of Downtown is still underdeveloped and struggling, 2) relatively little in the way of non-residential private-sector investment has been spurred by the city’s investments, and 3) we’ve failed to take full advantage of the best years in the current real estate cycle.

The last sentence is particularly prophetic. During a real estate cycle between 2001 and 2008 which saw the construction of new residential towers and office buildings in downtowns throughout the country, the Northbank had experienced zero “new starts”… a term used to describe construction of new residential or office buildings. Since that time, we are now in year ten of the latest, and probably greatest, urban real estate boom of our lifetime. And yet, the only new construction in Jacksonville’s wider downtown have occurred in Brooklyn, La Villa and the Southbank. Once again, the historic, walkable core of the Northbank has not produced any new, ground-up residential or office construction - yet many buildings have fallen only to be replaced by more empty space in the hopes of new development.

Various images of structures torn down in the early 1990’s that were hoped to spur future infill development.

Moving into the headwinds of a recession, have we once again failed to take advantage of the best years in the current real estate cycle because of “scattershot development” and a decades-long penchant for demolishing rather than developing?

Next: What Has Gone Right?