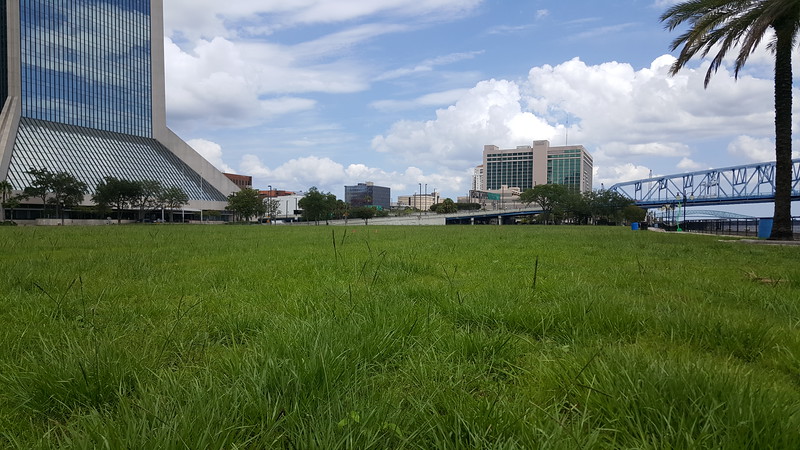 The demolition of the Landing has been the gift that keeps on taking. As we’ve covered many times in the past, the city has spent more than $25 million, not including maintenance costs, on a space that’s still a grass field two and a half years later. Now the city is planning to spend far more - and no one seems to have a clear sense of how much it will be.

In January 2020, the Downtown Investment Authority put out a Request for Proposals (RFP) seeking designs for the park element of the space. On March 18, the DIA selected three finalists, Agency Landscape + Planning LLC, Olin Partnership Ltd., and Perkins & Will Inc. On March 28, the city announced a $10-15 million “placeholder” budget would be included in the 2021-22 Capital Improvement Plan (CIP) to be used for the park portion. As we pointed out at the time, this is considerably less than Jacksonville’s peer cities have spent on their showpiece parks. 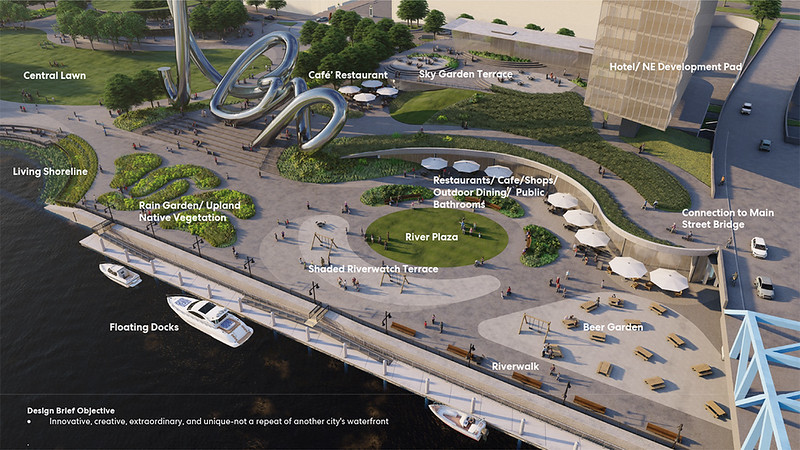 Conceptual rendering of the winning Perkins & Will proposal.

DIA told the bidders the designs should include an iconic work of public art and that a “significant amount of the budget” could be committed to it. One bidder expressed concern about the prompt to include such a piece without having a clear budget. When the three competing firms released their design proposals on June 24, two of them greatly overshot the original $10-15 estimate: Olin estimated a $27 million total, while Perkins & Will estimated between $22 million and $29 million. According to Perkins & Will’s pitch, the estimated costs depended on the material used in the artwork, a 151 foot sculpture that resembles the letters “JAX” (more on that in a minute). Agency’s proposal came in at $15 million, the only one within the original budget range.

Conceptual plan of the winning Perkins & Will proposal.

Why are two pitches so far over the original budget? Did the DIA increase the estimated amount? They never mentioned it publicly, and it raises the question of why the Agency proposal came in at only $15 million. A dig into the city’s proposed capital spending only leads to further questions.

On July 20, Mayor Lenny Curry released Jacksonville’s new Capital Improvement Plan (CIP), a tentative outline of infrastructure projects the city hopes to fund. It included $13.25 million for “Riverfront Park,” the name the city hopes people will call the Landing space instead of “Lenny’s Lawn” or “The Lawnding.” This is below even the $15 million proposed by Agency. Additionally, only $1.25 million is for the upcoming 2021-22 fiscal year. The remaining $12 million is pushed out to 2025-26. When a project is pushed out to the last year of the CIP, it’s a signal that the administration considers it something that would be nice to have, but not a priority. At any rate, it’s not a good sign that we’ll see anything happen at Lenny’s Lawn for at least another four years.

On July 22, the DIA selected Perkins & Will’s bid featuring the 151-foot sculpture. We aren’t going to weigh in on the sculpture’s design here, but a serious look into its scope and scale suggests it couldn’t be built as proposed even if the city committed the full $29 million.