Gone are the days when residents like Clara and Eartha White fed hungry neighbors or when early blues pianist Mathew Emanuel “Sugar” Underwood recorded songs after neighborhood streets like the Dew Drop Alley Stomp and Davis Street Blues. Hansontown was the brainchild of Daniel Dustin Hanson, a surgeon with the 34th Regiment, U.S. Colored Infrantry. Established in 1866 as a communal farming community for black Civil War veterans and freedmen to grow and sell crops, Hanson’s vision never materialized due to his death in 1868.

However, characterized by a narrow divergent street grid and shotgun homes, Hansontown did grow, eventually earning the name “The Bottom” and becoming an early target for urban renewal. Considered the slums, in 1942 a large swath of the neighborhood’s west side was razed and replaced with housing projects (torn down and replaced with a state office complex during the 1990s). What had not been taken out by 1974 met its demise when plans were cemented to construct the downtown campus of Florida State College of Jacksonville (FSCJ) on top of it.

Although Hansontown is no longer with us today, the area represents a portion of the urban core that could be redeveloped with affordable, mixed-use development and missing middle housing, connected to Downtown, Springfield, Riverside, San Marco, Durkeeville and other urban core neighborhoods with real and reliable mass transit. Here’s a collection of images illustrating the neighborhood prior to the development of FSCJ’s downtown campus and conversion of State and Union streets into one-way highways.

2. For 50 years, the tomb of Jacksonville founder Isiah Hart, and eight family members, was located near the present day intersection of Laura and Orange Streets. When Hart constructed the 35’ tall Hart Monument in 1852, the site was on the outskirts of town. Ironically by the late 19th century, the tomb of the man who made his riches off slave trading was surrounded by neighborhoods populated by freedmen and their descendents. In 1896, the tomb was desecrated by grave robbers and a few years later it was toasted in the Great Fire of 1901. Although still standing, the Hart family graves were relocated to Evergreen Cemetery and the tomb was dismantled in 1902. (State Archives of Florida) Many of Hansontown’s narrow streets still were not paved when the neighborhood was razed as a part of the Hogans Creek urban renewal project. (Jacksonville Public Library Special Collections Department). 5. The Patten Sales Company building under construction in 1948 at 1021 Hogan Street. This section of Hansontown was razed to make way for FSCJ’s downtown campus. (State Archives of Florida). 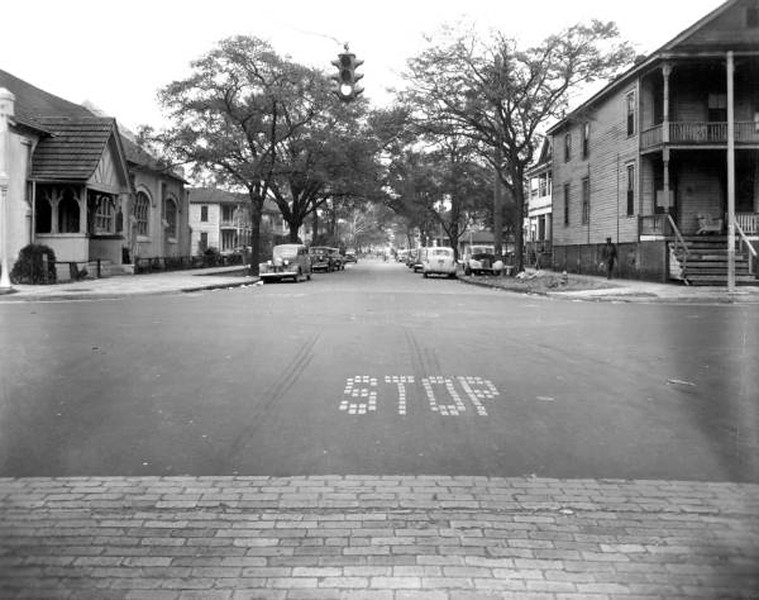 Looking was down Union Street from Pearl Street. (State Archives of Florida).

Looking north from the intersection of State and Davis Streets in LaVilla in 1941. (State Archives of Florida)

Blodgett Homes Photographed on October 12, 1942. Completed in 1942, the 654-unit public housing complex had become ridden with crime by the 1980s. In 1990, 394 families were relocated and the public housing complex was demolished. Today, the site is home to the 159-unit Blodgett Villas complex and the state office complex. (State Archives of Florida)

Intersection of State and Hogan Streets on October 13, 1949. (State Archives of Florida) 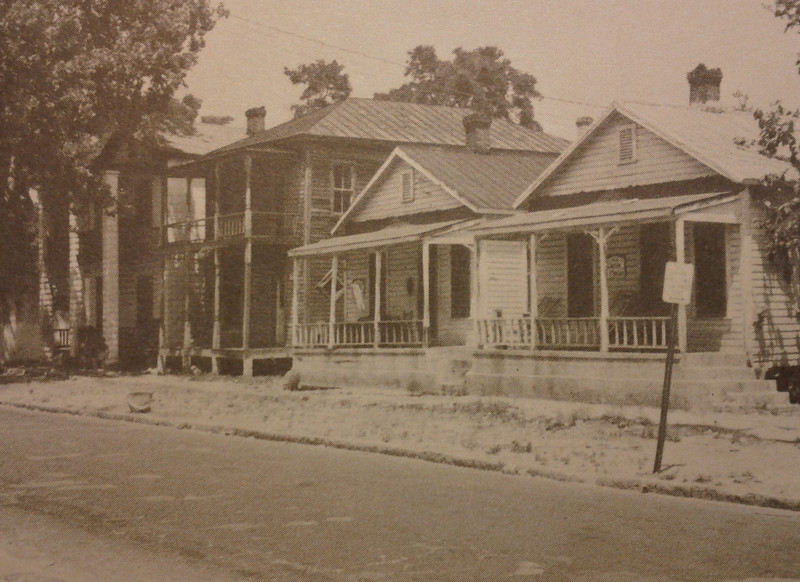 Julia and Orange Streets during the 1970s. Today, this is the site of FSCJ’s downtown campus (City of Jacksonville Planning and Development Department).