Construction continues on a 10-story, 308-unit high-rise apartment tower at the intersection of Riverside Avenue and Jackson Street in Brooklyn. Apartment units will include 219 one-bedroom and studio units, 81 two-bedroom and eight three-bedroom units. Amenities include a rooftop pool, beer garden and a 450-space parking garage. In addition, 14,000-square feet of street level retail space will be built along Riverside Avenue. A tower crane was recently assembled on the construction site. It is anticipated that the $60 million project will be completed in 2021.

Construction continues on a $128 million expansion of the Fuller Warren Bridge and I-95/I-10 interchange. The project, which is expected to be completed in summer 2020, will include the addition of a 12-foot shared use path over the St. Johns River, connecting San Marco and Riverside. Operational improvements and enhancements will be made to the interchange at Interstate 95 and Interstate 10, the Fuller Warren Bridge, and along the east side of U.S.17 north bound between McDuff Avenue and Rosselle Street. Intuition Ale Works is in the process of expanding its downtown brewery. The 6,000 square foot expansion will allow for a second taproom that can also be used for event space and private rentals. It is anticipated that the project will be completed in late October.

Construction continues on the Jacksonville Regional Transportation Center (JRTC). Anticipated for completion in September 2019 and being built around the Skyway’s Convention Center Station, the JRTC will include a terminal for local fixed bus routes, a First Coast Flyer Bus Rapid Transit hub, Skyway station and administrative offices.

Construction nears completion on a new 147-unit, 4-story Class A apartment community in the Southbank.

Work continues on the City of Jacksonville’s $31 million project to reconstruct the Coastline Drive Bridge, Liberty Street Brige and remove the courthouse parking lot over the St. Johns River. In addition, a new Northbank Riverwalk will be constructed along Coastline Drive, Market Street, Courthouse Drive and Liberty Street. Ron Chamblin, owner of the city’s largest independent bookstore, is in the process of restoring a three story building at 225 North Laura Street. When complete, the building will contain four apartments on the upper two floors and a restaurant on the first floor.

Burlock and Burrel American Whiskey is in the process of $139,932 interior build-out of a craft distillery at 417 Magnolia Street. 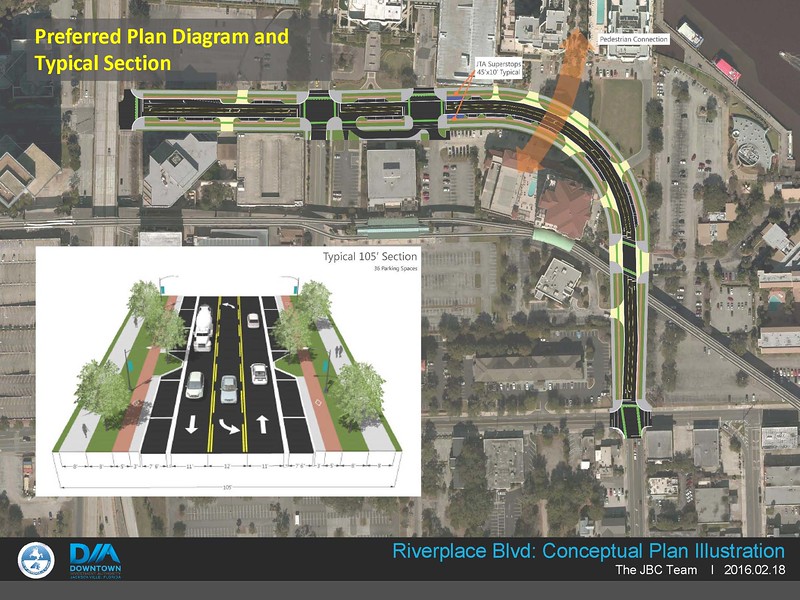 Construction continues on the City of Jacksonville’s enhancement of the Southbank’s Riverplace Boulevard. When complete, the four lane road will be reduced to three and include wider sidewalks and protected bicycle lanes. SADS Inc. has started work on transforming 905 West Forsyth Street in LaVilla into a mixed use project that will include a 5,000-square-foot “upscale neighborhood convenience store” on the ground floor and two additional floors with 16 apartments or condos. A rooftop garden and beekeeping program is also proposed for the 111-year-old building.