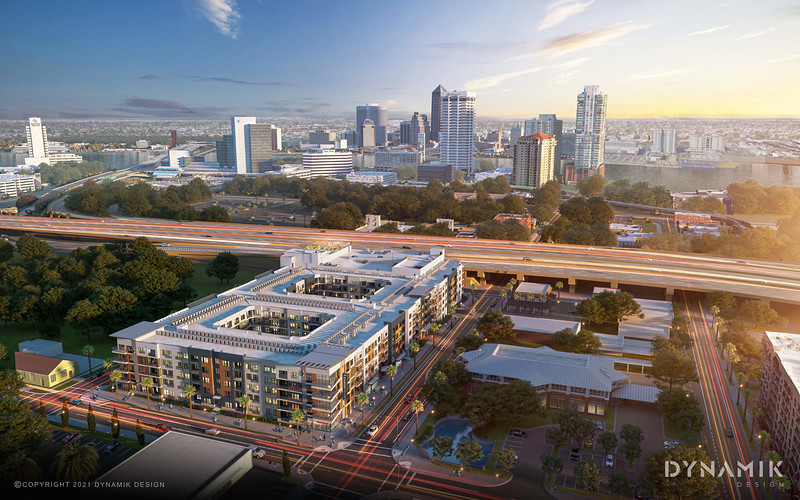 Construction continues on a $32 million urban, infill mixed-use development on the 3.3-acre former Florida Baptist Convention property in San Marco. Called The 1230 Hendricks, the five-story project is comprised of 345 multifamily units, parking garage and 5,000 square feet of ground-level retail space. Being developed by Block One Ventures and its affiliates, residential amenities will included an expansive fitness center, bike storage, pet spa, clubroom with gaming, lounging and remote work areas, pool courtyard, garden courtyard, and views across the river to downtown Jacksonville from the rooftop pool and sky lounge topping the sixth level of the seven-level, 526 stall parking garage. Preleasing is anticipated to begin in 2022. Completion is anticipated in the second quarter of 2023.

Construction continues on the development of a new Publix anchored shopping center at the intersection of Atlantic Boulevard and Hendricks Avenue. The 62,000 square foot East San Marco project will include a two level 39,000 square foot Publix supermarket and space for two restaurants and additional retail shops. The project is anticipated to be completed in early 2023.

Harbert Realty of Birmingham, AL is in the process of retrofitting 1939 Hendricks Avenue into a two to three tenant professional office building. The building was formerly occupied by a gay men’s bathhouse called Club Jacksonville. The office project is anticipated to cost $3 million.

47. The Hendricks at San Marco

Construction on $21 million The Hendricks at San Marco continues. The 133-unit, four story multifamily project is being developed by Corner Lot Development Group and Harbert Realty Services will include a three-level parking garage and be completed by February 2023.

48. The Terraces at San Marco

Construction continues on the fourth multifamily apartment development since 2019 in an area of Philips Highway being branded as East San Marco. Called Eastborough, the 226-unit apartment community will be developed along Philips Highway by EJF Capital LLC and Chance Partners LLC. Adjacent to San Marco Promenade, the $25 million Eastborough project is situated on a 6.62-acre parcel that will be developed to include two multifamily buildings and a future retail outparcel. Eastborough is anticipated to be completed by 2023. The reconstruction of Beach Diner at 1965 San Marco Boulevard continues after being destroyed by a late 2019 fire.

A sports-themed and family-friendly entertainment venue called Fore Score Golf Tavern intends to renovate and open at 1407 Atlantic Boulevard in San Marco Square. The entertainment concept will include four bays for golf or other sports, a quick-service restaurant, alcohol service and outdoor patio seating in the back of the 4,300-square-foot building.