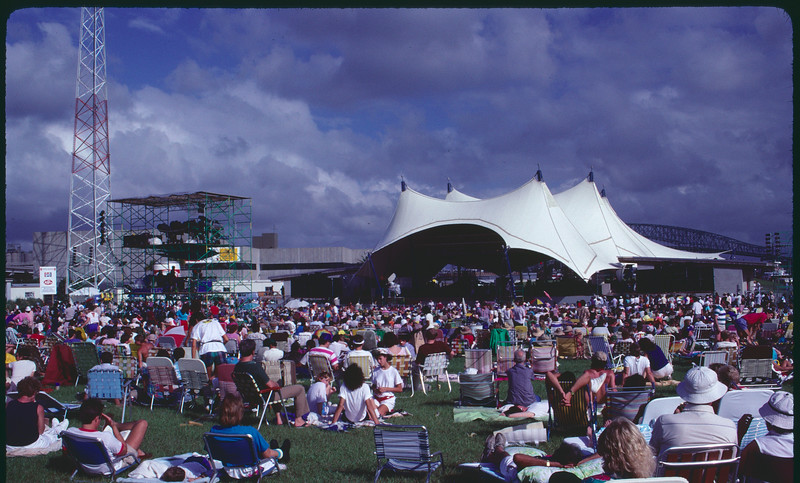 Metropolitan Park is an 18.25 acre, urban waterfront, multi-purpose, family orientated park that is located on what used to be an urban landfill, supported by a concrete bulkhead. The land was purchased by the Department of Housing and Urban Development for $1,005,000 in May 1972. The beginning of the park started in 1982, with the first groundbreaking. The cost of the project was $3.1 million dollars. The ground breaking was delivered by then Mayor, Jake M. Godbold and then Governor, Bob Graham, on December 8, 1982. The project was underwritten by the City of Jacksonville, U.S. Department of the Interior, State of Florida Department of Natural Resources, and the television station WJCT - TV (local public broadcasting system). The entire park project was planned to be completed in different phases. The first phase included an exhibition mall for arts and crafts shows, a family picnic area, playground areas, and the focal point of the park was a Performance Pavilion. The park was planned to be a multi-purpose park for family enjoyment that included performances, concerts, plays, talent shows, and other group gatherings. On May 10, 1990, there was another ground breaking for the new entrance to Metropolitan Park. Mayor Tommy Hazouri presided over this event. At that time, the park underwent a $1,079,000 construction project that included paved walkways, lighting, landscaping, parking, and playground areas. Metropolitan Park was the winner of the 1986 Governor’s Design Award. The Florida National Pavilion, located in Metropolitan Park, was the home for the Jacksonville Music Festival and the Jacksonville Jazz Festival.

Metropolitan Park of the Past

The future site of the St. Johns River Shipbuilding Company in 1940. Courtesy of the State Archives of Florida.

At its height, the St. Johns River Shipbuilding Company employed 20,000 workers during World War II. Courtesy of the State Archives of Florida.

The St. Johns River Shipbuilding Company operated from April 1942 until August 1945. It produced 82 ships for the World War II military effort. Courtesy of the State Archives of Florida.

Built in 1902, the Catherine Street Fire Station is a direct link between modern day Jacksonville and the Great Fire of 1901.

The mission of the 10-acre Kids Kampus was “to cooperatively create a kid-sized, interactive, experiential town connecting facts, figures, and suggestions for real life use.” The groundbreaking ceremony for Kids Kampus was held March 8, 2000, with Mayor Delaney presiding over the event. Popular with young families, Kids Kampus may have been one of Jacksonville’s shortest-lived parks, open just 10 years.