Robert Fulton Cutting and the Fulton Mansion at East 67th Street (demolished in 1962) in New York City. (An Adventure in Democracy)

Robert Fulton Cutting, known as “the first citizen of New York”, was a wealthy financier and philanthropist in New York City who started the sugar beet industry in the United States with his brother William Bayard Cutting. In 1883, Cutting acquired 475 acres on the south side of the St. Johns River that was rumored to be the former location of a Native American village named Homoloua. In 1766, this area was described by William Bartram as “being covered with shells of oysters, which Timucua fed much upon near the sea-coast.” He then hired John Francis LeBaron to plat an Episcopal mission farming and fishing community called Fulton.

Also an antebellum plantation where the enslaved built ships and sandwiched between the marshes of Mill Cove and Shipyard Creek, land was then sold for maritime development, educational and religious facilities with a focus on the economic prosperity of the region’s former enslaved. It was also home to an African American Episcopal mission that was part of a chain known as the Missions of the Upper St. Johns. Other missions were established at Mandarin, New Berlin, Pilot Town and Mayport. 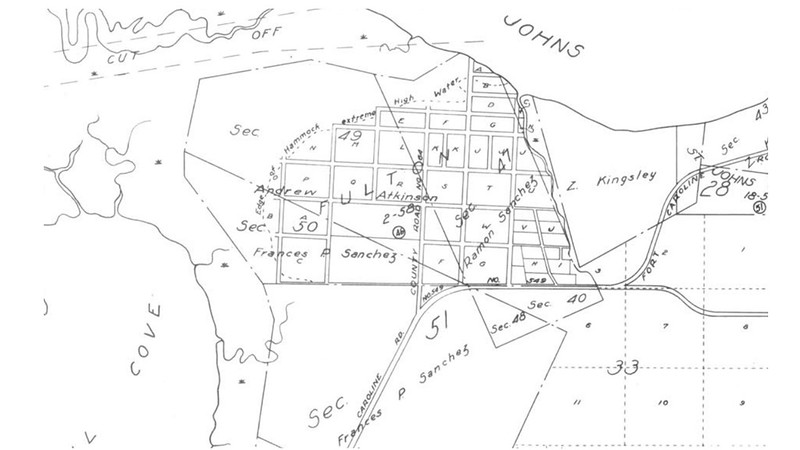 By 1884, Fulton had grown to a population of 100 residents. Freezes in January 1886, December 1894, and February 1895 devastated the Fulton settlement by destroying its citrus and vegetable gardens, causing many in the community to abandon it for greener pastures. Cutting then sold his failed holdings at Fulton to Captain H.F. Hole, S.G. Jarvis and others who returned life and activity to the rural riverfront community. Around 1910, the Southern Menhaden Company acquired Captain Hole’s land at Fulton, taking over the town and opening a fish scrap and fertilizer factory.

A 1943 aerial of Fulton (University of Florida)

During its height, the community was home to a post office, general store, church, school and cemetery. Fish processed, fruits and vegetables grown in Fulton were shipped to local and Northern markets. By the early 1920s, Southern Menhaden had relocated to the Gulf Coast, leaving Fulton to survive as a small fishing camp community on the banks of the St. Johns River. During the 1930s, Harry E. Olcott Sr. of Neptune Beach founded the Fulton Fish Company after purchasing a fish camp in Fulton. The business later relocated, eventually ending up in Jacksonville Beach and Olcott would go on to become an original partner in the first Harry’s Seafood Bar and Grill that opened at The Jacksonville Landing.

Mentioned by nearby Cosmo residents as also being a small Gullah Geechee community, the subdivisions of Mariner Point and Beacon Hills & Harbour were developed on top of Fulton during the 1960s. Today, excluding a boat ramp at the foot of Fulton Road, Fulton, it’s buildings, working waterfront and cemetery have long been erased from existence.

The Fulton Road Boat Ramp was the location of the heart of the forgotten community of Fulton.