A view of Dixieland Park from the St. Johns River in 1907. (State Archives of Florida

The 21-acre park featured a 160-foot bamboo slide called the “Dixie Dewdrop.” It had gardens, a theatre, a dance pavilion, a silent movie studio where legendary western star Tom Mix made films and “polite Vaudeville” which charged 25 cents and 50 cents for matinees and 25 cents, 50 cents and 75 cents for evening performances. The park had animal shows, daredevil attractions and exhibitions with motor-propelled balloons and aerial rides. It even had baby incubators, the first ever in Florida. Premature infants from surrounding areas were brought to the park for public viewing and care by trained medical personnel. The park charged a 10 cent admission fee.

The park’s novelty started to wear off, and Dixieland Park gradually faded away. For all practical purposes Dixieland Park was gone when the United States entered World War I in 1917. Now, all that’s left of the venue which called itself “The Coney Island of the South” is the Treaty Oak on the Southbank. The majestic tree was once part of Dixieland Park.

Situated at the intersection of Myrtle Avenue and West 13th Street in what is now Durkeeville, Mason Park was created as a trolley park by the North Jacksonville Street Railway. Known as the “Colored Man’s Railroad”, the North Jacksonville Street Railway was incorporated in 1902. The company was unique in several ways, not the least of which was that it was a wholly-owned black enterprise. Mason Park was considered one of the finest negro amusement centers in the nation.

Ten thousand people attended the New Year’s Eve and Emancipation celebration held the first year at Mason Park, which included a closing benediction given by Reverend James Johnson, the father of James and John Rosamond Johnson. During February 1904, Louisiana-based minstrel man, Billy Kersands came away highly impressed by Jacksonville’s dynamic African-American entertainment scene after witnessing an evening performance by members of the Rabbit’s Foot Company at Mason Park. A few years later in 1910, Kersands relocated his traveling minstrel show’s headquarters to Jacksonville. 19-year-old Ferdinand Morton, living and performing in LaVilla at the time, decided to join the show. While on tour, Morton received his nickname, “Jelly Roll.” By the end of Morton’s career he had become known as the “Father of Jazz”. During the 1960s, the site of Mason Park became the location of what is now Stanton College Preparatory School. 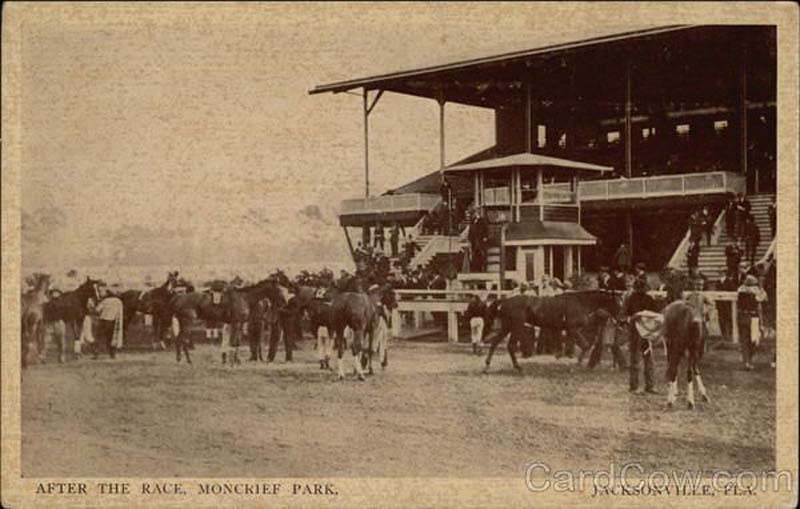 Moncrief track with grandstand in background. Image courtesy of Cardcow.com

In early 1909, led by lumber mill owner Thomas V. Cashen, a group of Jacksonville businessmen established the Florida Live Stock & State Fair Association with $150,000. Their intention was to construct a horse racing facility that would make Jacksonville the winter racing center of the South.

When the facility opened, it was the first race track in this part of the country and considered one of the best in the United States at the time. Races were held every day except for Sunday during the season, which was during the winter months. The first racing event was held for nineteen days from March 27 to April 17, 1909. An estimated 6,000 men and women racegoers were in attendance on opening day. Foods served included hot dogs and hot roast beef sandwiches. When the gates opened on Thanksgiving Day 1909, between 9,000 to 10,000 people attended.

During its operation, the track proved to be an economic asset for Jacksonville. It’s promoters estimated that the economic benefit for Jacksonville merchants was over $4 million in trade during the 110 day racing seasons. By 1910, New Yorkers were calling Moncrief the “Belmont of the South” and Jacksonville was being sold as the place to go on vacation. In addition, the historic American Derby, now held annually at Arlington Park near Chicago, was initially held at Moncrief Park.

The last race was held on April 1, 1911, thirteen days after the last race, newspaper editorials denounced horse racing as events that only attracted one class of people who lived off the residents as parasites. They also claimed the races did not support the local economy. In Spring 1911, the Florida State Senate passed a bill prohibiting all racetrack gambling by an overwhelming vote of 62 to 1. After the race track closed, the property was sold and redeveloped into a residential subdivision in 1914.