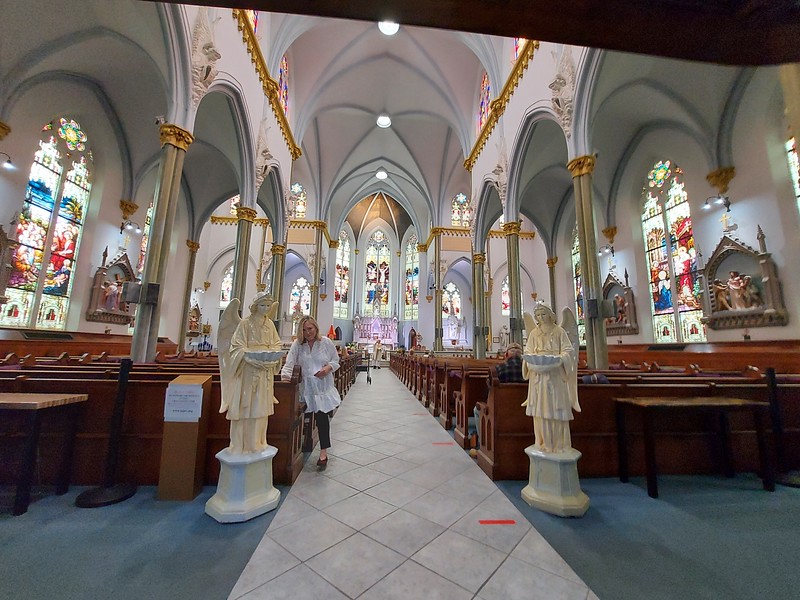 The Immaculate Conception Church traces its origin back to an 1845 mission of a Catholic parish in Savannah. In December 8, 1854 the mission was formally established as a parish. Fr. William J. Hamilton, a priest from the Diocese of Savannah, was sent to Jacksonville to dedicate the church and become its spiritual leader.

In 1858 the parish purchased this property on the southwest corner of Newnan and Church Streets was purchased for $150. The first church was burned by the Union during the Civil War. The second was destroyed by the Great Fire of 1901. This structure was built as a replacement. It was designed by M.H. Hubbard, an architect based out of Utica, NY.

It was dedicated on December 8th, 1910 on the Feast of the Immaculate Conception. The former pastor, Bishop Kenny, presided at the dedication of the church which is constructed of white Kentucky limestone. Its interior is decorated with fine stained glass windows produced in Munich, Germany by the Mayer Stained Glass Company. At the time of its completion, Immaculate Conception was the tallest building in the city, stretching 178.5 feet high. Now 111-years of age, it is one of the finest examples of Gothic Architecture in Florida.

Built right after the Great Fire of 1901 the Elena Flats building is one of the last historic rooming houses in downtown. Initially catering to middle-class workers, the Elena Flats were later converted to a rooming house for Jones College students in the 1950’s. By the late 1970’s, the building had been subdivided into as many as 25 rooms. Over the next several decades, the building began to deteriorate from a lack of maintenance. It was last used as nightly and weekly rental housing in the early 2000’s.

In 2015, the building was nearly knocked down to make way for a parking lot. Saved when the city elected to landmark the building, investors Jack Meeks and JoAnn Tredennick, through J Properties III LLC, bought the almost 7,000-square-foot building at 122 E. Duval St for $20,000 on August 26, 2015.

After securing historic tax credits and investing nearly $3 million in restoration costs, the building has new life again as a Quadruplex. Four market-rate, 1,700 square feet, two bedroom and two and a half bathroom apartments are now available for rent. Each unit features a front parlor with fireplace, a formal dining room, a private back porch and a shared front porch. 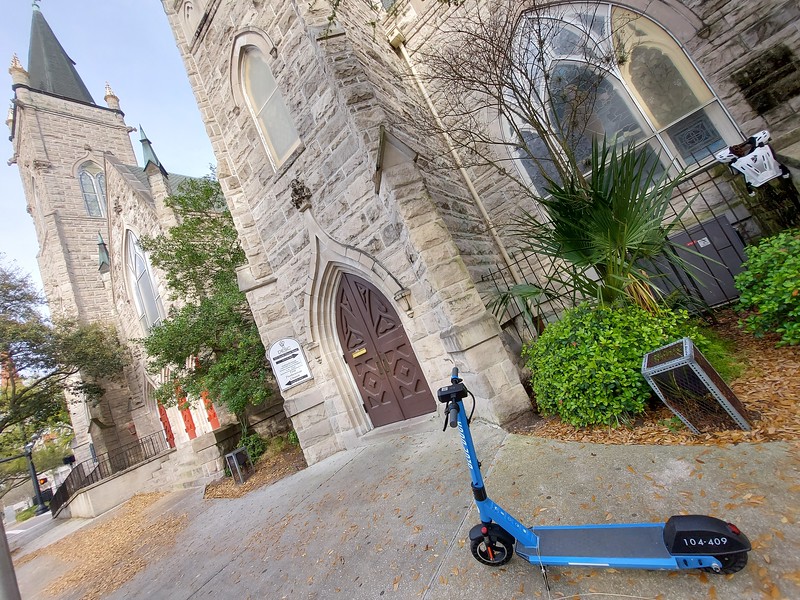 This Gothic Revival church building was constructed in 1901 to replace the original structure that was destroyed by the Great Fire of 1901. The First Presbyterian Church congregation was established in 1840. In 1847, it constructed its first building on this site. At the time, it was located across the street from a log blockhouse built as a place of refuge from Native Americans and Freedom Seekers for White settlers during the Seminole Wars. The church’s original building on this property was destroyed during the Great Fire of 1901. As a result, the First Presbyterian Church hired Columbia, SC-based architects Wilson & Edwards to design this structure. Construction began in November 1901 and the first church service took place in the sanctuary on June 1, 1902.

Designed by McClure & Holmes and designated as a local historic landmark in 1995, the Central Fire Station was built in 1902, a year after the Great Fire. It served as Jacksonville’s primary firefighting center for over eight decades until 1987.

Now Iconic Real Estate Investments seeks Conceptual Approval for an adaptive reuse of the Central Fire Station Building located at 39 East Adams St. The proposal is to convert the two-story, 9,600 square foot building to a mixed-use development for a restaurant and office space.

Between 1883 and 1929, Pittsburgh industrialist Andrew Carnegie funded 2,509 libraries in the United States and Europe, including a public library for Jacksonville following the Great Fire of 1901. Designed by architect Henry John Klutho, the Jacksonville Free Public Library formally opened on June 1, 1905. While Carnegie believed cultural organizations like libraries could help raise up the working class, not all of Jacksonville’s citizens were fans. It was a place that would have a great impact on the upbringing of civil rights leader Asa Philip Randolph.

His father, the Reverend James William Randolph was considered to be very radical in his thinking and beliefs during the Jim Crow era. Not only did he preach that Jesus and Moses were men of color, he also taught his sons that Black was not to be inferior and that they should consider men like Nat Turner, Denmark Vesey, Frederick Douglass, Hannibal and Joseph E. Lee as role models.

The Morocco Temple was designed by Henry John Klutho in 1910. The architectural style is a unique mix of the Prairie and Egyptian styles. Constructed for the Shriners, it was designed to include a 1,500 seat auditorium where many events took place, such as a presidential address in 1912 by William Howard Taft. In 1984, the Shriners moved out of the building and it was reconfigured into commercial office space.

During the height of the Womens Suffrage movement, the “Prison Special” visited the Morocco Temple in 1919. The “Prison Special” was a group of 26 suffrages who had served prison sentences that toured the nation to highlight their experiences. Reaching Jacksonville in February, the group met with Helen Hunt, then the chairman of the National Women’s Party in Florida.

They later held an outdoor meeting in Hemming Park and an evening meeting in the Morocco Temple. Dressed in prison garb, at the meeting the women shared their experiences of being arrested for fighting for women’s rights. At the end of the Morocco Temple event, a resolution was adopted to urge President Wilson to pass the federal woman suffrage amendment.