Major office buildings developed or occupied as corporate headquarters for extended periods of time by Jacksonville-based companies that no longer exist.

They say, the location of a corporations headquarters is an important element of its image and personality. It’s also an important economic element for the communities and neighborhoods they call home.

What would Downtown Jacksonville look like today if several events outside of Jacksonville’s control never took place? For example, given the size of Florida’s population today, if Jacksonville’s “Big Three” were still around, the Bank of America Tower probably would not be the tallest building in the city today and the Landing’s food court would still be full of restaurants. Imagine what Florida’s insurance industry would look like in 2019 if Hurricane Andrew didn’t destroy South Florida in 1992? For all the blood, sweat and tears a community can pour into downtown revitalization, as the oil embargoes of the 1970s and oil gluts of the 1980s show, sometimes reality is not in your personal control.

Throughout most of the 20th century, Downtown Jacksonville was arguably Florida’s most influential business district. A fact that time has washed away is that the skyline we see today was essentially built by seven companies that no longer exist. Here’s a look at seven corporate decisions made over a 15 year span that transformed a rapidly growing skyline into a district with a glut of hard-to-fill office space. Courtesy of the State Archives of Florida

American Heritage Life (AHL) was founded in Jacksonville in 1956. In 1963, the firm acquired the 18-story Lynch Building from its original owner for $2 million. For decades, the growing company’s downtown headquarters was known as the AHL Building. By 1985, AHL had nearly 400 employees working in downtown. When 11 East became too small, AHL built the new AHL Building across the street from the new Jacksonville Landing. Completed in 1989, their post modern 23-story, 357 foot tower became the sixth tallest building in downtown.

However, AHL didn’t stay around long. In 1994, it completed a new 8-story, 150,000 square foot complex off JTB at 4920 San Pablo Road, taking its workforce with it to the Southside. When Allstate Corporation purchased AHL for $1.1 billion in 1999, it had already grown to become the third-largest work-site insurance company in the US behind AFLAC Inc. and UnumProvident Corp. At the time, the Davis family of Winn-Dixie fame, owned a combined 42% share of AHL’s stock.

While the holding firm was dissolved, Allstate did keep the existing management team, regional headquarters and its 600 jobs in the Southside. Nevertheless, the relocation to the Southside did result in the loss of hundreds of downtown jobs and more office vacancies. Courtesy of the State Archives of Florida 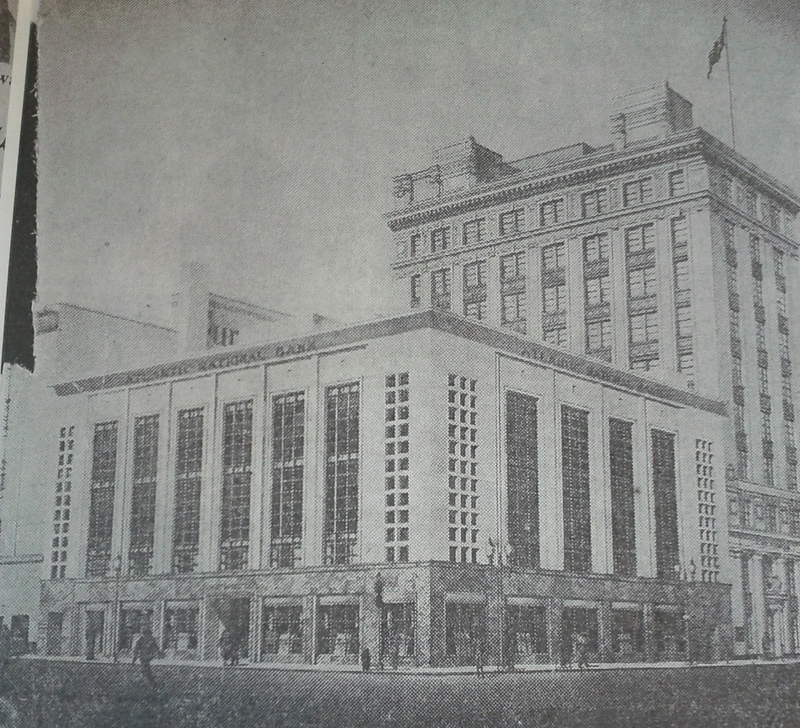 Its early growth led to the construction of two of downtown’s oldest highrises, 121 Atlantic Place (1909) and the Schultz Building (1926). Rising 135 feet, 121 Atlantic Place actually enjoyed a short reign as Florida’s tallest. In need of more space, ANB expanded in 1951 by building a large four story modern structure on the corner of Forsyth and Hogan Streets. 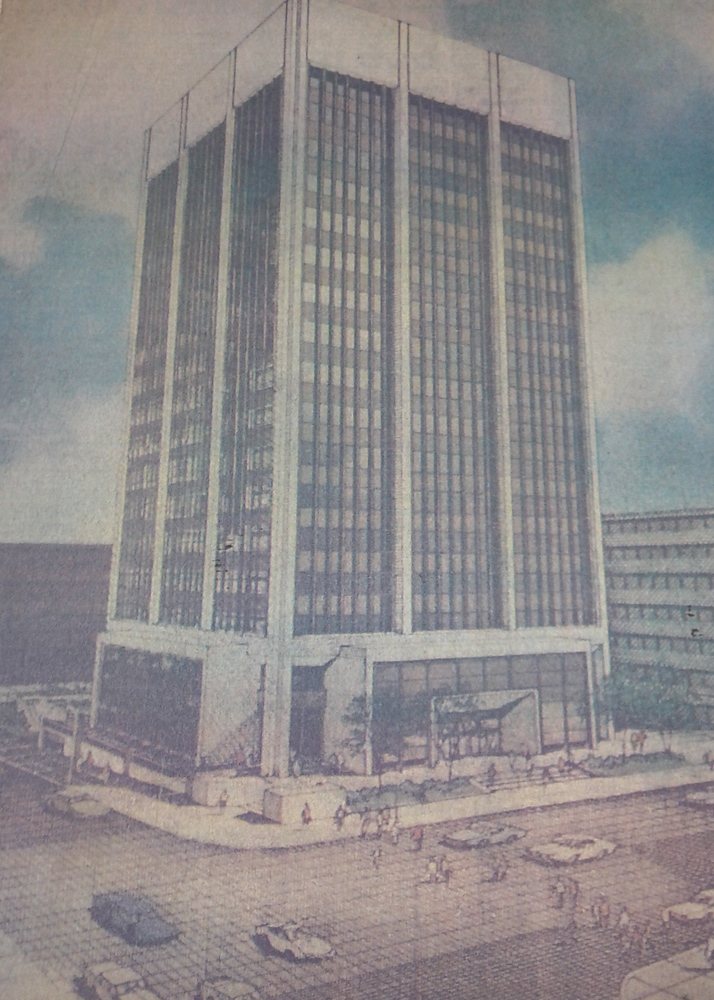 By 1972, ANB had grown to become the largest of Jacksonville’s big three banks (ANB, Florida National and Barnett). Now it was time to make their mark on downtown’s skyline. That year, ANB announced plans for a $9 million, 18-story tower that would be known as the ANB Building. The 278 foot structure was completed in 1974. ANB occupied floors 1,2,4,5,6,7 and 8 of the 309,000 square foot tower. Floors 9-16, roughly 110,000 square feet, were available for lease. The Clipper Room, a 250-seat restaurant for the bank’s employees, and the Quarterdeck Club were located in the building’s top floors. ANB connected the new tower and a new garage across the street, with a network of tunnels that also provided access to historic 121 Atlantic Place. 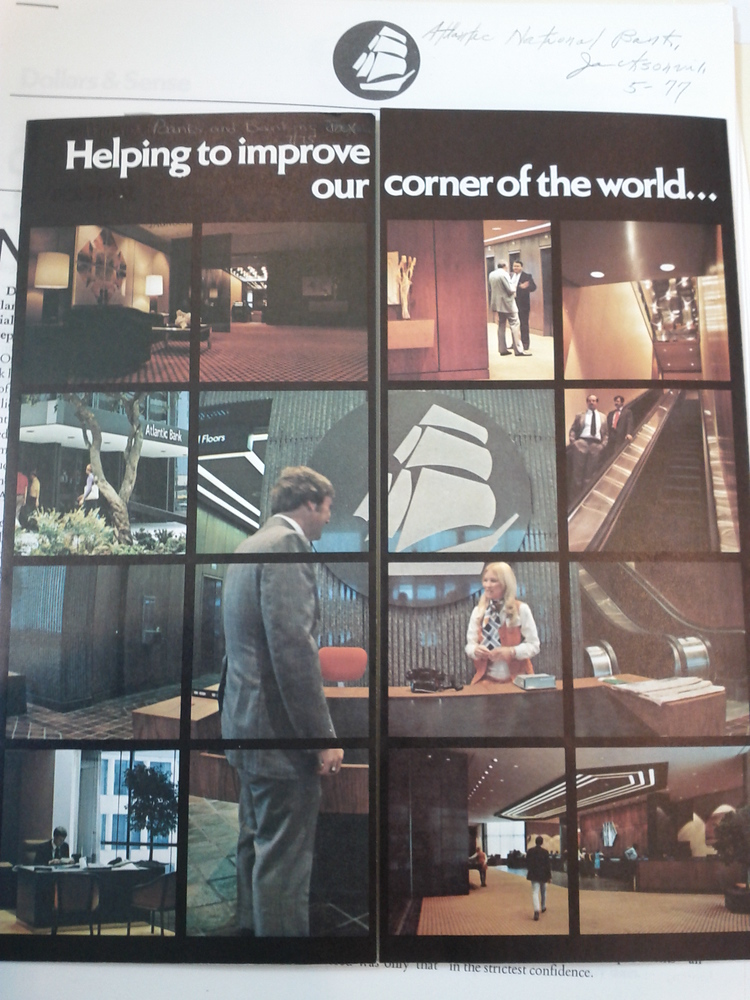 With the bank’s assets approaching $3.9 billion, its president Edward Lane, Jr, negotiated the merger of this longtime Jacksonville financial institution with Charlotte-based First Union in 1985. At the time of the merger with First Union, ANB has 1,384 employees downtown.