This downtown powerhouse originally was founded by Samuel Hubbard as the Mercantile Exchange Bank. Hubbard had found early success in Jacksonville as a hardware company owner and developer of Springfield. After the Great Fire of 1901, his bank became Florida National Bank. It was housed in what is now the Laura Trio. During the 1920s, millionaire Alfred I. du Pont acquired a majority interest in the bank. His wife, Jessie Ball du Pont eventually became a director of the bank.

After Du Pont’s death, the du Pont Trust, managed by Ed Ball, Jessie’s brother, controlled the bank. In 1961, Ball built a new 11-story, 500,000 square foot Art Deco structure to serve as the bank’s operations center at 214 North Hogan Street. Ball constructed the building using materials, such as marble floors and granite exteriors, which would appreciate in value. However, things he thought were frills, like hot water faucets and executive bathrooms were excluded. 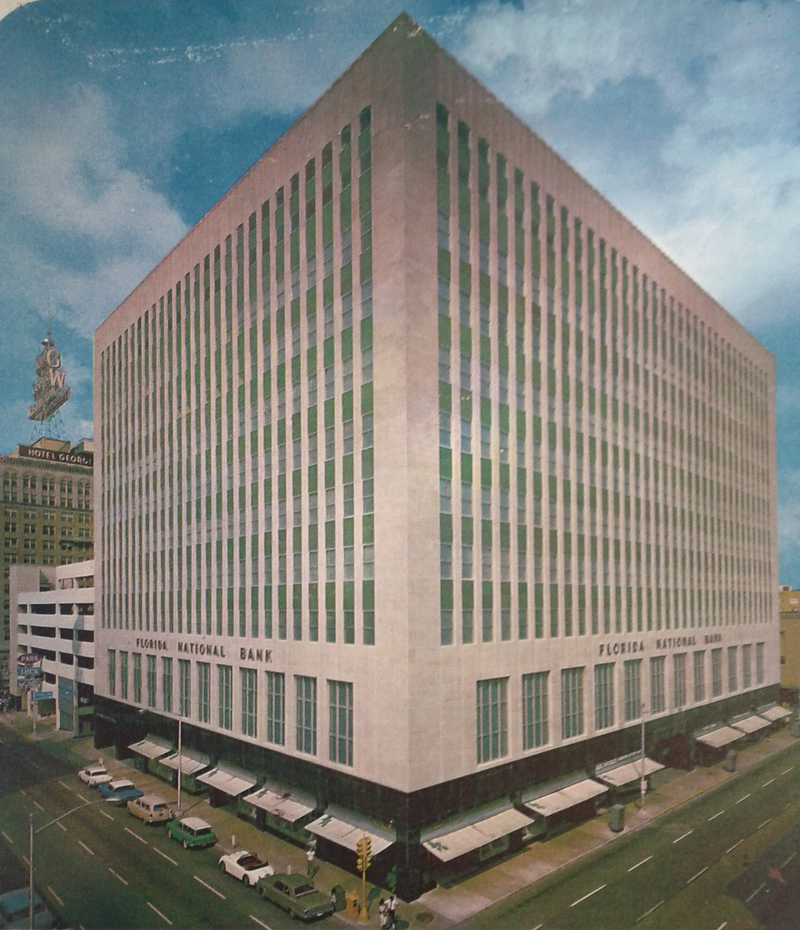 Under Ball’s leadership, FNB grew to become the second largest commercial bank in the state. Politics of the era, ultimately eliminated this major company from downtown Jacksonville. An amendment to the Bank Holding Act of 1966, aimed at Ed Ball, forced the du Pont trust to sell either a certain amount of the bank’s ownership or their non-banking interest by 1971. With du Pont no longer a major part of the scene, in 1981, FNB agreed to be purchased by New York’s Chemical Bank whenever interstate banking laws were changed. 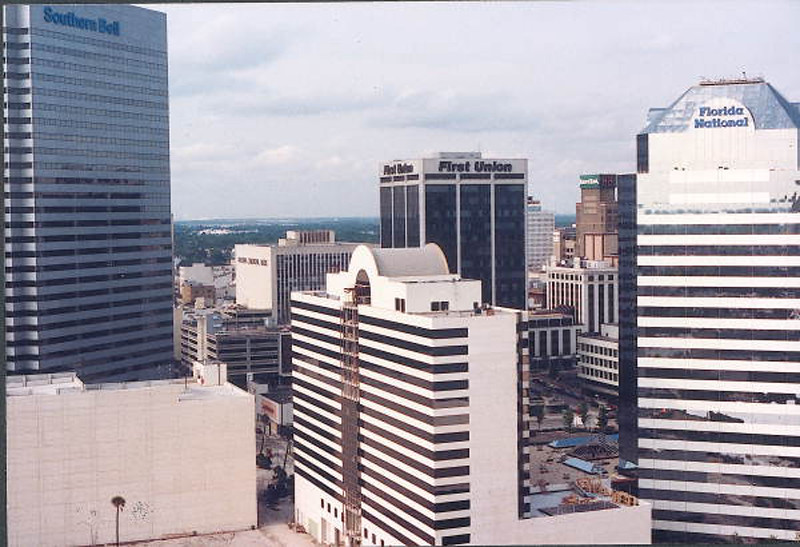 Four years after acquiring neighbor ANB, Charlotte-based First Union acquired Chemical Bank’s option to buy FNB. A year later, FNB was no more when First Union completed its takeover for $849 million. First Union’s takeover of ANB and FNB, resulted in two major downtown anchors disappearing and a loss of nearly 600 downtown jobs. First Union eventually became Wachovia in 2001. With no real attachment to Jacksonville or its downtown economy, the North Carolina-based bank announced it would be relocating its 2,000 employees from downtown to the Southside.

First Union’s major downtown investments took place in Charlotte, the city where its headquarters was. In 2000 when it completed the 32-story Three First Union Center. Now known as Three Wells Fargo Center, the 450 foot, 890,000 square-foot building is the 7th tallest in Charlotte. After becoming Wachovia, the bank began construction on the Wachovia Corporate Center in Uptown Charlotte. Wachovia planned to occupy 450,000 of the 1.5 million square foot, 786 foot skyscraper. Wachovia was acquired by San Francisco-based Wells Fargo during the tower’s construction and the amount of space initially proposed by Wachovia was no longer needed. Much of this space was filled by Duke Energy, another growing company based in Uptown Charlotte. It is now known as the Duke Energy Center.