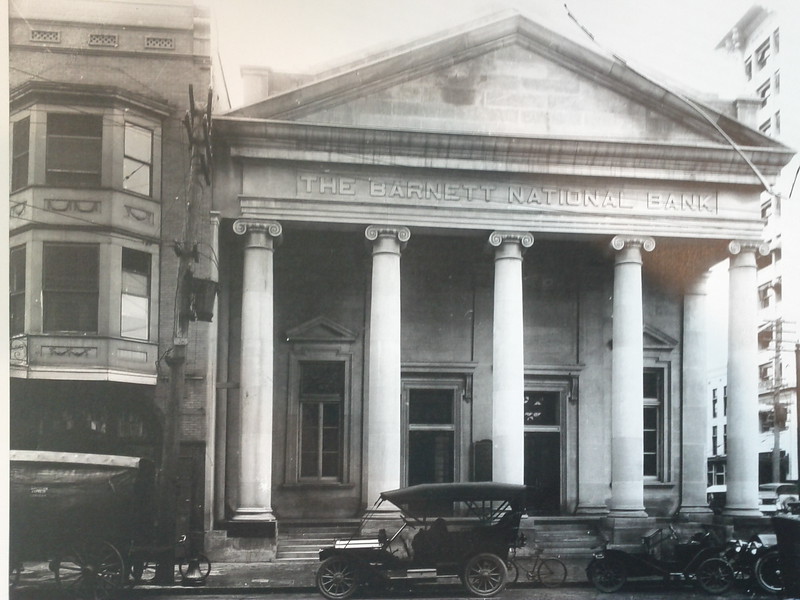 The institution that became known as Barnett Bank was established by William Boyd Barnett. Barnett and his family relocated to Jacksonville in 1877, and opened the Bank of Jacksonville in May of the same year. William was president and his son acted as bookkeeper. Because most banks were private and unregulated at this time, the Bank of Jacksonville got a slow start — only totalling $11,000 deposits in the first year. However, Barnett would soon make his son, Bion, a partner—changing the fate of the bank immediately. 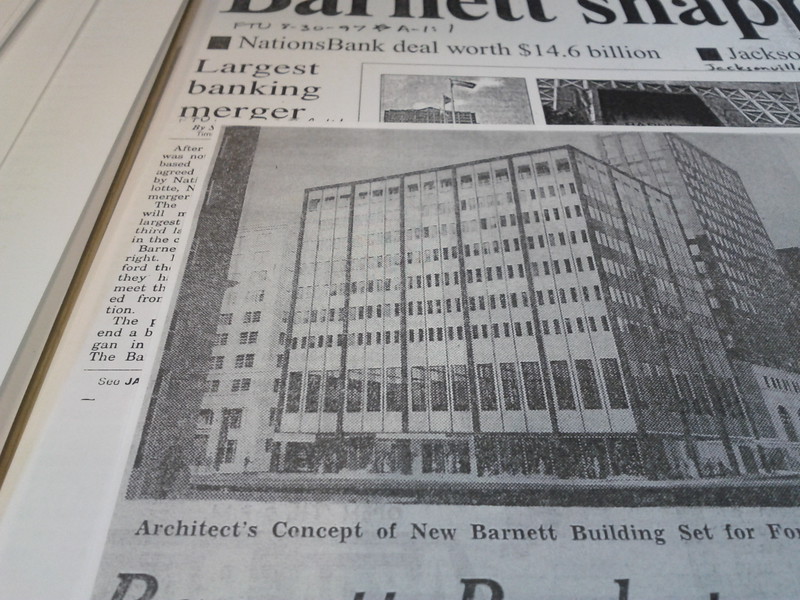 After William’s death in 1903, Bion renamed the institution Barnett Bank, in honor of his father. In 1926, Barnett completed its 18-story headquarters building at the intersection of Laura and Adams Streets. The Chicago school style structure remained Jacksonville’s tallest building until 1954. In 1962, the bank added to Jacksonville’s skyline, building a new 10-story headquarters (now the Jacksonville Bank Building) for 400 employees at the intersection of Forsyth and Laura Streets. Not to be out done by Florida National Bank’s new headquarters on Hogan Street, Roman Travertine Marble from Tivoli, Italy was utilized in its construction.

Appearing to be the lone one of the big three to survive the mergers of the 1980s and early 1990s, Barnett built and moved into a new $110 million corporate headquarters tower in 1993. Known as the Barnett Center, at 42 stories, it became the tallest building between Atlanta and Miami. Barnett initially occupied 42% of the 656,000 square foot tower. According the the company, the new headquarters building would be a symbol of its strength and leadership. Such a perspective was pretty common of the large home-grown companies single-handedly taking Jacksonville’s skyline to the next level. 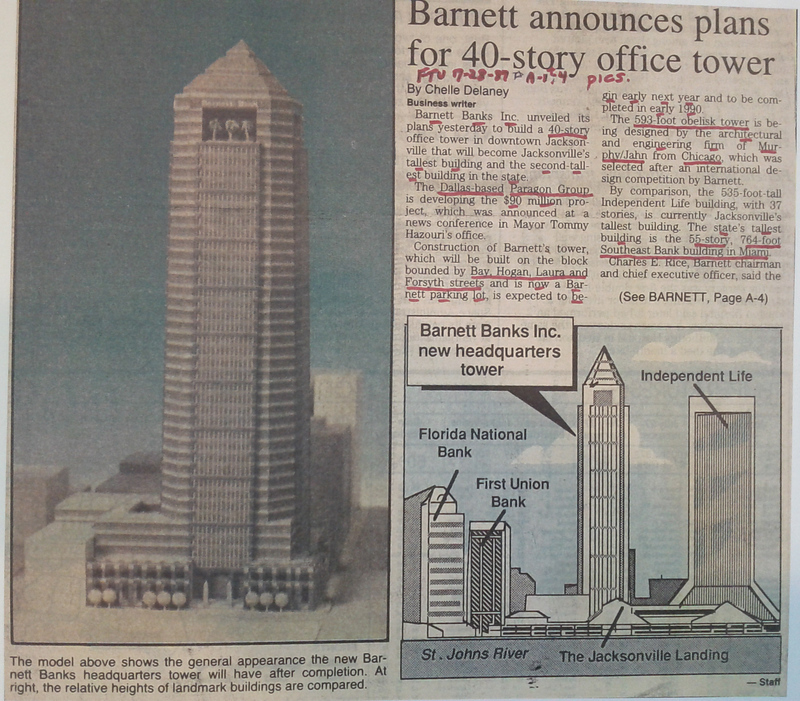 By 1995, Barnett, the nation’s 17th largest bank, had become Florida’s largest commercial bank and a Fortune 500 company, with over 600 branches, $3.10 billion in revenue and 6,800 local employees. Despite its size, the last of downtown’s big three banks disappeared when Charlotte-based NationsBank acquired Barnett in 1997 for $14.6 billion. At the time, it was the largest bank merger in U.S. history. A year later, NationsBank acquired BankAmerica to become Bank of America.

Over the years, Bank of America has continued to grow. However, the benefit of that growth has been realized in Uptown Charlotte, where the bank’s 60-story headquarters is located. In 2002, the 47-story Hearst Tower was completed. Bank of America occupies 322,000 of the 1.6 million square foot structure. In 2010, the financial institution expanded in Uptown Charlotte by completing the 32-story, environmental friendly One Bank of America Center. On the other hand, the former Barnett Center (now Bank of America Tower) is the last commercial skyscraper to be built in Jacksonville’s Northbank.

Charter is the one downtown-based company that grew into an international conglomerate faster than the skyline’s upward march in the 1970s and 80s. Like a bad premonition, its fall from grace was just as swift as the decline in need for a new office tower in downtown today. The Charter Company was founded in 1949 by Raymond Knight Mason. Initially, in the mortgage, banking and development industries, it expanded into the gas and oil industry in the late 60s and early 70s, acquiring gas stations, tanker contracts and a refinery in Texas. When the Arab Oil Embargo struck in 1973, Charter cashed in, becoming a Fortune 500 company and the apple of Wall Street’s eye.

Charter also purchased the majority of du Pont Trust’s interest in Florida National Bank (see page on the rise and fall of FNB), when Congress forced du Pont to divest itself of a certain ownership percentage of FNB. Charter’s downtown headquarters were located in the Universal-Marion Building. Located at 21 West Church Street, the modern 19-story tower was the tallest building in the Northbank when it was completed in 1963.

By 1981, Charter’s sales totaled $5 billion and the time had come for the company to put its mark on Jacksonville’s skyline. Charter teamed up with Southern Bell, proposing a 30-story skyscraper that would house both of the company’s offices. With nearly 1 million square feet of leasable office space, the Charter/Southern Bell Tower would be Jacksonville’s largest. Now, known as EverBank Center, a notable feature of the 447-foot tower is that each floor has 16 corner offices.

Unfortunately, Charter’s fall from grace would be quick. On July 29, 1982, four of its senior executives died in a helicopter crash in Ireland. At the same time, Charter took a beating when a serious surplus of crude oil led to a major oil glut in the 1980s. Hemorrhaging revenue, Charter backed out of plans to locate offices in the Charter/Southern Bell Tower, which was completed in 1983.

Less than a year later, downtown’s lone Fortune 500 company laid off 200 of its downtown Jacksonville workforce, filing for protection under Chapter 11 of the bankruptcy law on April 20, 1984. By 1985, Charter’s downtown workforce was down to 350. By the time it emerged from bankruptcy protection in 1987, the majority of its 180 subsidiaries had already been sold off. What was left of the company was then relocated to Cincinnati, OH. 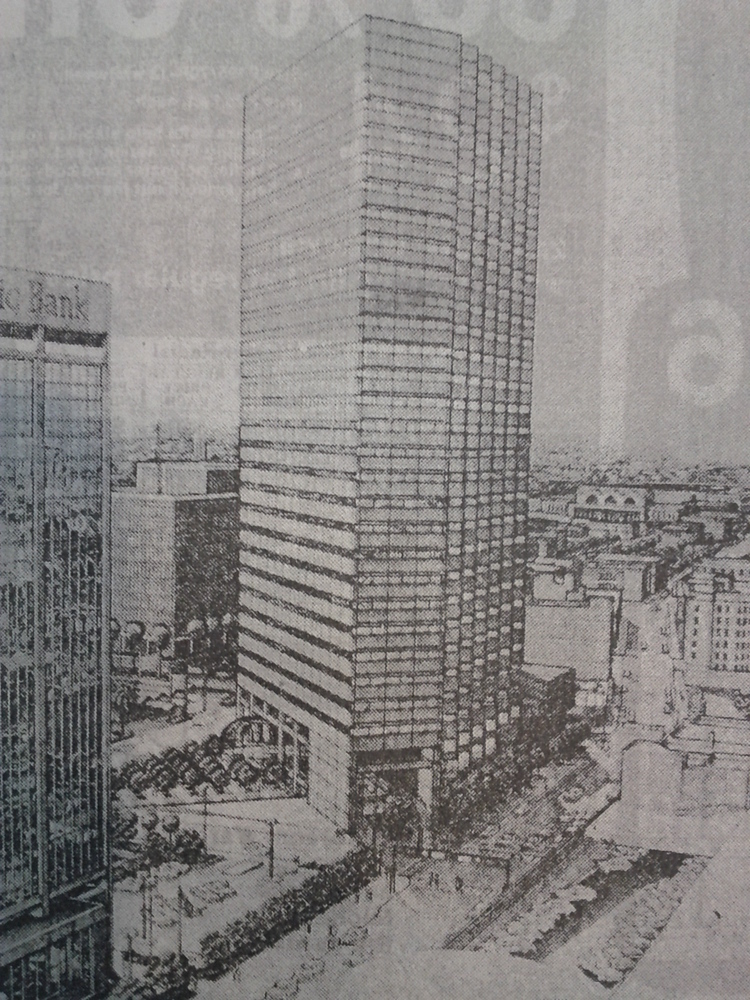