The 2014 APA Florida Annual Conference at the Prime F. Osborn Convention Center. This 10,000 square foot meeting room was once the grand lobby for the largest train station in the country south of Washington, D.C.

For many years, Jacksonville leaders have hoped to build a new convention center to replace the undersized Prime Osborn Convention Center in LaVilla. In 2017, the City of Jacksonville commissioned a study for a new convention center on the former sites of the old Courthouse and City Hall Annex on Bay Street that made a series of design recommendations for the structures. The study led to an official design competition in which bidders were judged on meeting the study’s recommendations.

The bids were submitted and in September 2018, the Downtown Investment Authority selected Jacobs Development as the winner. In the meantime, Jaguars owner Shad Khan expressed interest building a convention center near TIAA Bank Field, and in December 2018, Mayor Lenny Curry put the convention center project on ice. Since then, the city has moved forward with an effort to develop the Courthouse site without the City Hall Annex lot, while Jacobs has submitted two pitches hoping to develop the entire property with convention center uses. In rejecting Jacobs’ most recent bid, Downtown Investment Authority CEO Lori Boyer said Jacksonville was 5 to 10 years away from having a market that could support a convention center of the scope defined by the 2017 study.

This leads to a dilemma: city leaders acknowledge that the Prime Osborn Convention Center is inadequate, and in fact it impedes the longterm goal of restoring the building as a passenger rail station, but believe the city is years away from the kind of structure defined by the 2017 study. If both these things are true, it would appear that the real problem here lies in the study. A rendering of the 2018 Jacobs convention center proposal. The proposal was a response to development criteria earmarked for a future convention center much larger than what Jacksonville can support. (Courtesy of Jacobs Development)

As we’ve written about before, Jacksonville has an addiction to studies. We get so hung up on studies and reports and consultants’ recommendations that we often lose sight of our real goals and never move forward. The 2017 Convention Center Study is a perfect example: its requirements are so out of step with what Jacksonville’s market needs and can support that they have set back a real decision on a convention center for the last five years and counting.

The study found that Jacksonville should build a convention center with a 200,000-square-foot exhibition hall, 40,000-square-foot ballroom, at least 45 meeting and breakout rooms, a full-service restaurant, optional transient boat slips, a 350-room full-service convention center hotel and a 1,700-space parking garage. The estimated cost for this was $250-430 million, with some of the 2018 bids greatly exceeding that figure. There are two main problems here. First, the study doesn’t explain why some of these requirements are important; for instance, why do we need a 200,000-square-foot exhibition hall? Second, the study doesn’t take into account existing assets that already meet the stated requirements.

Jacksonville’s dilemma and a logical solution 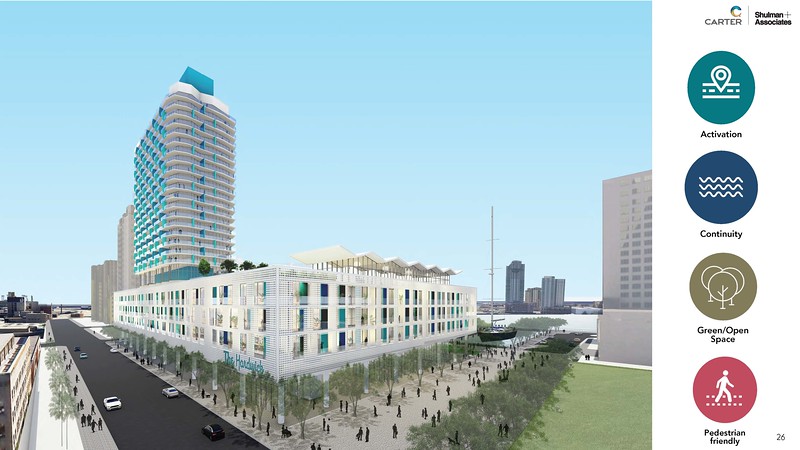 Let’s put it this way: the DIA states there needs to be more restaurant, entertainment and retail options in Downtown before the city can attract enough convention business to support a new facility. But Downtown Jacksonville is already in the convention business and has been since the opening of the Prime Osborn Convention Center nearly four decades ago. The goal shouldn’t be reaching some point where arbitrary convention center requirements can be supported. It should be form-fitting a solution that meets our actual needs and market conditions.

It’s clear the Prime Osborn isn’t the solution. Antiquated and more than a mile from the Northbank core, lacks a connected full-service hotel, restaurant, entertainment and retail options within walking distance. Its 78,540-square foot exhibition hall is also considered to be too small. Built as a train station, it is a facility that would be better off being converted back into a train station to complement JTA’s new $60 million Jacksonville Regional Transportation Center in LaVilla.

On the other hand, Jacksonville has assets to work with that fulfill many of the needs of a convention center. In 1998, the city invested $21 million in public incentives to build the Adam’s Mark Hotel, now the Hyatt Regency Jacksonville Riverfront. The Hyatt is a full-service convention hotel with 951 rooms, centrally located and in walking distance of restaurant and entertainment options within the growing Elbow entertainment district. It also has 116,000 square feet of centralized meeting space, including a 28,000-square-foot ballroom, 41 meeting and breakout rooms, several restaurants and 21,000 square feet of riverfront deck space. This covers much of what the Convention Center Study recommended other than the lack of a large exhibition hall.

Fortunately, the Hyatt is also located immediately adjacent to the 104,980-square-foot City Hall Annex lot that has been targeted for convention center space for years. As such, solving Jacksonville’s convention center dilemma isn’t a matter of constructing a massive new facility, or just kicking the can down the road another decade. A practical, time efficient and cost effective solution to Jacksonville’s situation would be to simply expand the Hyatt Regency Jacksonville Riverfront’s existing meeting facilities with a 100,000-square-foot exhibition hall for the on the City Hall Annex site.

In addition to immediately meeting the majority of the requirements laid out in the Convention Center Study, the Hyatt’s assets could be complemented by other forthcoming developments. The proposed Ford on Bay development could include a marina and 25,000-square-feet of retail and dining space on the former courthouse site next door to the Hyatt, while the city is hoping for a mixed-use public space at Lenny’s Lawn just two blocks away. When combined with what already exists within walking distance, like the Florida Theatre and Northbank Riverwalk, the clustering of complementing uses within a compact setting gives Downtown the concentrated collection of restaurant, entertainment and retail options some believe are needed to support a convention facility.

How Jacksonville’s convention assets stack up

A look at other mid-sized cities’ convention centers show that Jacksonville’s existing assets compare favorably. It also calls into question some of the findings of the 2017 Convention Center Study, including the claim that Jacksonville needs a 200,000-square-foot exhibition hall. Even Palm Beach, which has a substantially higher population and more tourist traffic than Jacksonville, thrives with an exhibition hall half that size. 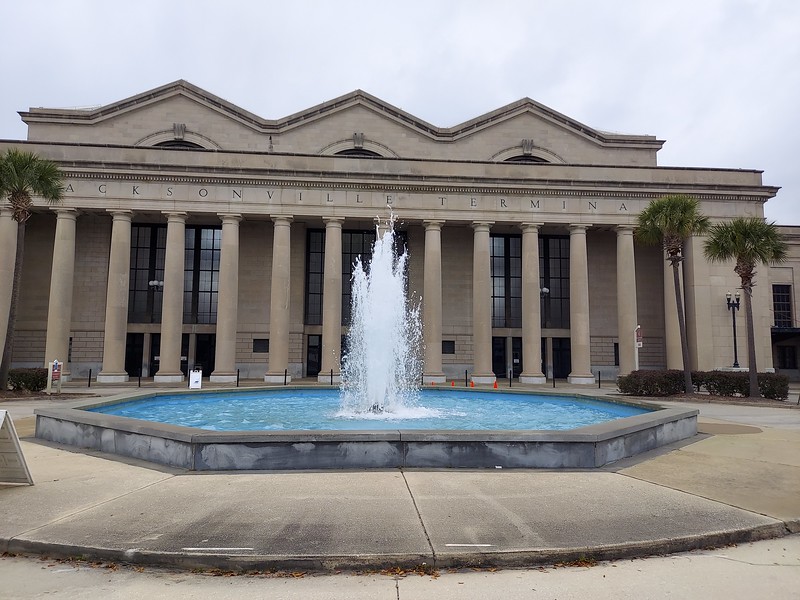 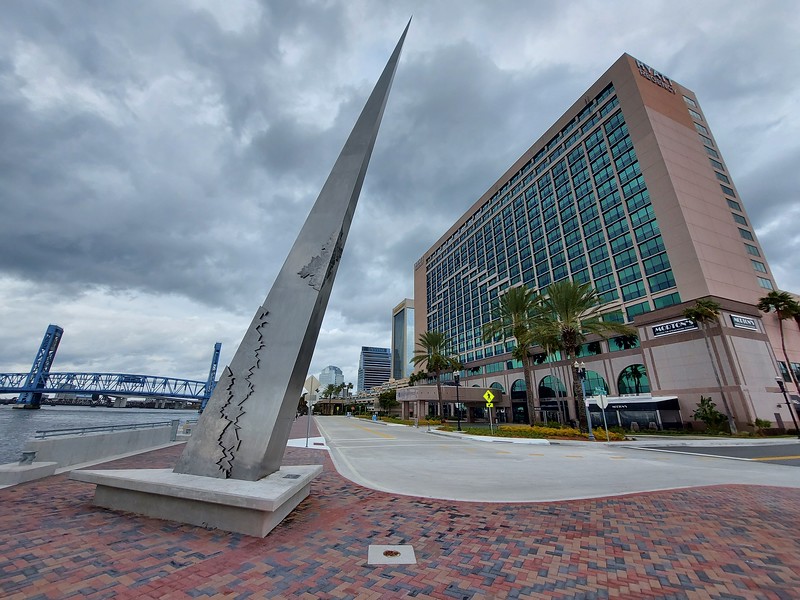 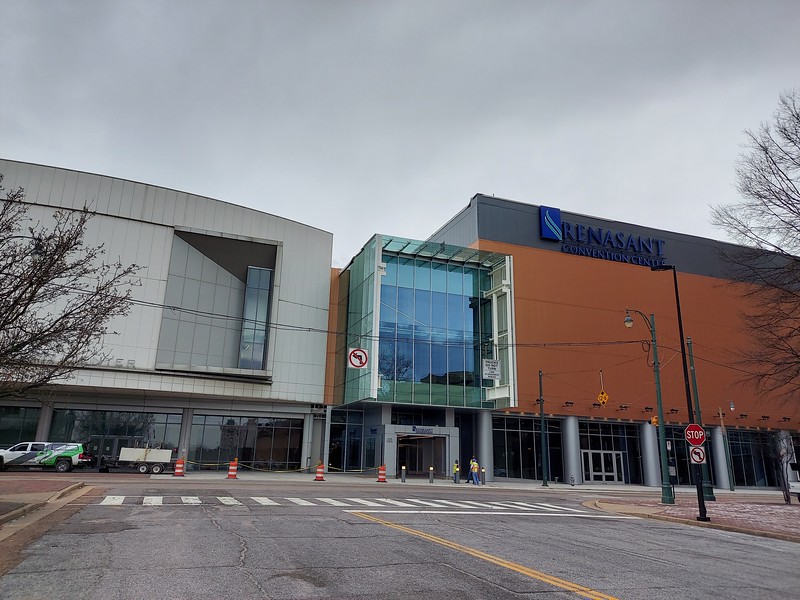 The Tucson Convention Center in May 2019. (Michael Barera and Wikipedia)