The path would include historical markers at the Richmond Hotel, Old Stanton High School, Clara White Mission, Ritz Theater and other key sites in the neighborhood in the western part of Downtown Jacksonville.

Downtown Investment Authority is planning to allocate $830,000 from its existing budget toward the project. The funding plan has to be approved by City Council, but does not require any extra dollars from the city.

Boyer said community leaders can get started on designing the trail now.

“I see no problem being able to design in the meantime,” Boyer said.

Boyer has proposed putting murals similar to the ones at the Jacksonville Regional Transportation Center at LaVilla as the markers along the Heritage Trail.

During a meeting about the proposal Tuesday, Councilwoman Ju’Coby Pittman said she plans to recruit an advisory group to guide the project’s design and implementation.

“The next step is to make sure that we continue to have the voices of the community in the past generations of families who’ve lived there,” Pittman said. 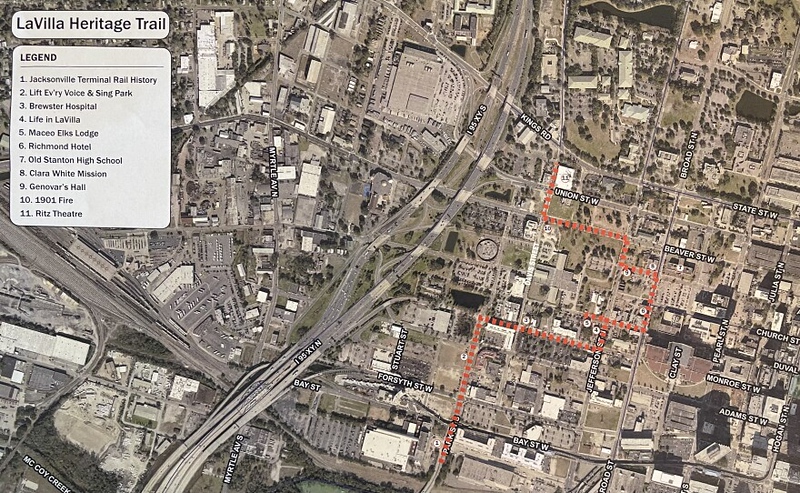 A map of proposed markers on the LaVilla Heritage Trail.

If the neighborhood gets that designation, it would open the door for a special tax credit for redevelopment projects.

During Tuesday’s meeting, community members emphasized the need for current LaVilla residents to be at the forefront of planning for the neighborhood’s future.

“I’m a little disappointed that the community engagement component is last,” Stanley “Doc” Scott, with the African American Economic Recovery Think Tank, told city officials. “The point that I want to make clear that we need to start from the bottom.”

“We’ve all learned that rolling over the community, we’re just pushing people out,” Covington said. “We have to make a plan to house those people again.”

The Downtown Investment Authority said it plans to put together an advisory committee — based on names council members Pittman and Gaffney will provide — and firm up budget plans for the heritage trail in the coming weeks, ahead of a full budget proposal going before City Council early this summer.

CORRECTION: A previous version of this story stated the funds for the LaVilla Heritage Trail would come from the city budget in the upcoming fiscal year; the funds are actually being allocated from Downtown Investment Authority’s budget during the current fiscal year.

Article by Claire Heddles originally published by WJCT News. Claire joined WJCT as a reporter in August 2021. She was previously the local host of NPR’s Morning Edition at WUOT in Knoxville, Tennessee. During her time in East Tennessee, her coverage of the COVID pandemic earned a Public Media Journalists’ Association award for investigative reporting. You can reach Claire at cheddles@wjct.org or on Twitter @ClaireHeddles.