The Baymeadows Golf Club was a 500-acre residential and private golf course community that opened in May 1968. The development was designed by Gordon Desmond Muirhead, who was considered to be one of the county’s most respected golf course designers.

During the 1980s, Muirhead warned that the era was a pivotal point in the city’s history. According to Muirhead, Jacksonville could become the next sprawling Houston if it did not find a way to maintain its downtown department stores and retail base.

In 2005, the golf course that Muirhead designed was acquired by D.R. Horton and closed. Since that time, hundreds of townhouses and single family homes have been built on the former golf course.

Baymeadows Park is a mixed-use development that was recently built on the thirteenth hole of the golf course. The retail development is anchored by a five-story, 100-room Springfield Suites by Marriott Hotel.

The Cypress Point Executive Center is a office building that was completed in 1989.

Lofts at Baymeadows near the intersection of Baymeadows Circle West and Cypress Green Drive.

A new residential subdivision being built on a portion of the former Baymeadows golf course.

Meadow Walk is a subdivision that was recently constructed on a portion of the former Baymeadows golf course.

Patio homes near the intersection of Baymeadows Circle West and Carnoustie Lane. Linkside at Baymeadows is a patio home development completed in the late 1970s.

Looking north at the entrance to Los Lagos Condominiums on Baymeadows Circle West. This development was built in 1974.

The Village Green condominium development was built in 1983. 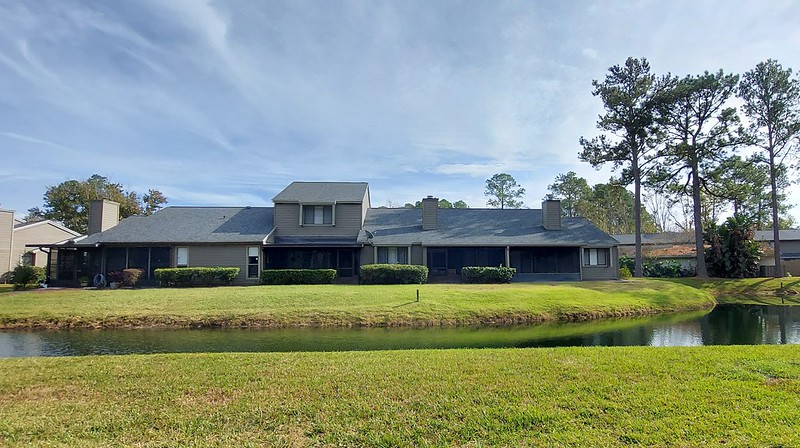