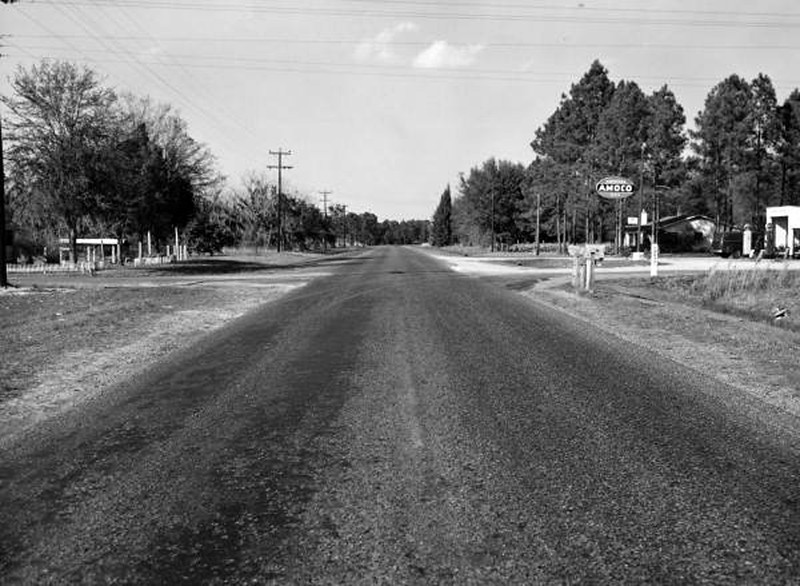 The development of what is now known as Mandarin dates back to Britain gaining control of Spanish Florida in 1763. When the community’s first post office opened in 1765, it was called St. Anthony. During this period, British planters established large scale plantations along the St. Johns River with the majority of its enslaved labor forces coming directly from Africa. The establishment of plantations in Mandarin includes a 10,000-acre tract at Mandarin Point that was acquired by London merchant Francis Levett, Sr. in 1767. Here, forming the north border of what is now known as Julington Creek, Levett developed a plantation named after his wife Julia, to cultivate rice, indigo, corn, potatoes, peas, peaches, oranges and wine. Levett’s enslaved labor also slashed and boxed 150,000 pine trees for turpentine production. However, with the Treaty of Paris returning Florida to Spain in 1783, St. Anthony was renamed San Antonio and Julianton was abandoned by Francis Levett, Jr, who moved his enslaved to the Bahamas before establishing a second Julianton Plantation to grow sea island cotton overlooking Sapelo Island in Coastal Georgia.

Nevertheless, small plantations and farms supported continued to populate the rural area during the late 18th and early 19th centuries. This includes a five-acre homestead granted by the Spanish government to Anna Madgigine Jai Kingsley in 1812, a few months after her formal emancipation. Here, the West African wife of Zephaniah Kingsley built a home and farm with twelve enslaved to grow corn, poultry and livestock. Kingsley quickly abandoned Mandarin after attacks from Native Americans and Gullah Geechee freedom seekers, including a loss of 41 Africans to Seminole raiders and guerrilla warfare on the Florida frontier during the Patriot rebellion. Kingsley relocated from Mandarin to Fernandina briefly before settling on Fort George Island in 1814.

A Mandarin family preparing a one pot meal, a long running tradition of the region’s Gullah Geechee story. Courtesy of Florida Memory.

In 1830, Calvin Read, a prominent planter and postmaster, renamed the community after the Mandarin orange, which was introduced from China and was a major crop in the immediate area. Born in Vermont in 1788, Read like many other prominent families in the vicinity operated his land with enslaved labor, including seven souls listed as property of the Reads in the Slave Schedule of the 1850 United States Federal Census to cultivate Mandarin’s largest orange groves. Mandarin was officially incorporated as a municipality in 1841, during the midst of the Second Seminole War between Native Americans and formerly enslaved freedom seekers and the United States Army. Combined, the three Seminole Wars (1816 to 1858) were the largest conflicts in the country between the War of 1812 and the Civil War. A frontier town at the time, Mandarin did not escape these conflicts unblemished. On December 20, 1841, four residents were murdered when Seminole bands led by chiefs Powis-fixico (Short Grass) and Halleck-Tustenugee raided the village. 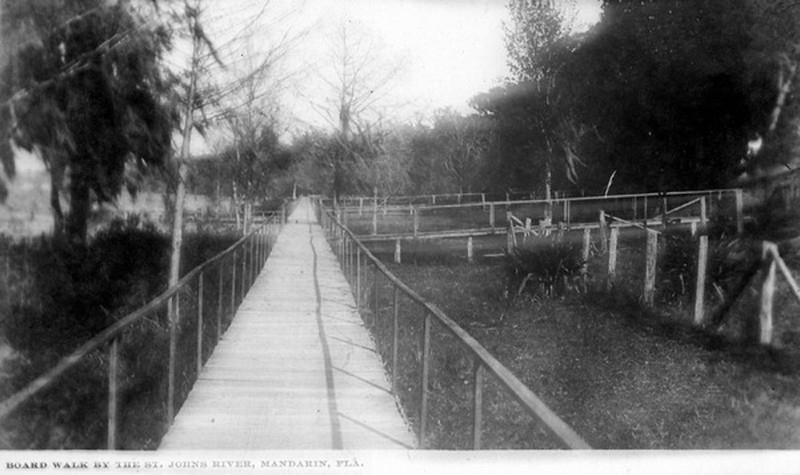 The Mandarin boardwalk during the early 1900s. Courtesy of Florida Memory.

Mandarin’s planters also suffered during the Civil War with Union troops taking the community’s produce and livestock. In 1864, a Confederate mine hit and sank the Union steamboat, the Maple Leaf, right off the banks of Mandarin Point during the Civil War. On October 12, 1994, this shipwreck site was designated a National Historic Landmark. Of interesting note, the Maple Leaf was piloted by Romeo Murray, a former enslaved laborer at Kingsley Plantation. After the war, Murray was one of several freedmen who settled in Mandarin.

During Reconstruction, Mandarin flourished, developing into a small farming village that shipped oranges, grapefruit, lemons and other fruits and vegetables to Jacksonville via steamships traveling on the St. Johns River. At its peak, at least eleven different steamboats shipped agricultural products from Mandarin’s wharves. Harriet Beecher Stowe and family at their Mandarin residence in the late 19th century. Courtesy of Florida Memory.

In 1868, its most famous resident, Harriet Beecher Stowe, the author of Uncle Tom’s Cabin, acquired a 30-acre riverfront site in the community. During her time in Mandarin, which she referred to as “a tropical paradise”, she became the state’s most important publicist. During her 17 winters in Mandarin, she was known for welcoming tourist debarking from steamers and charging them $0.75 cents to meet her and admire her surroundings.

A supporter of the Underground Railroad, going as far as to house fugitive enslaved in their Ohio home, in Mandarin Stowe was instrumental in convincing the Freedman’s Bureau to build a school for African-American children in the surrounding area. By 1881, situated primarily between modern day Brady Road and Scott Mill Road, Mandarin’s population had swelled to 1,200, 900 of which were of African descent. Mandarin also was home to a Catholic church and convent, post office and a couple of stores. While there were no hotels, travelers were accommodated at boarding-houses. 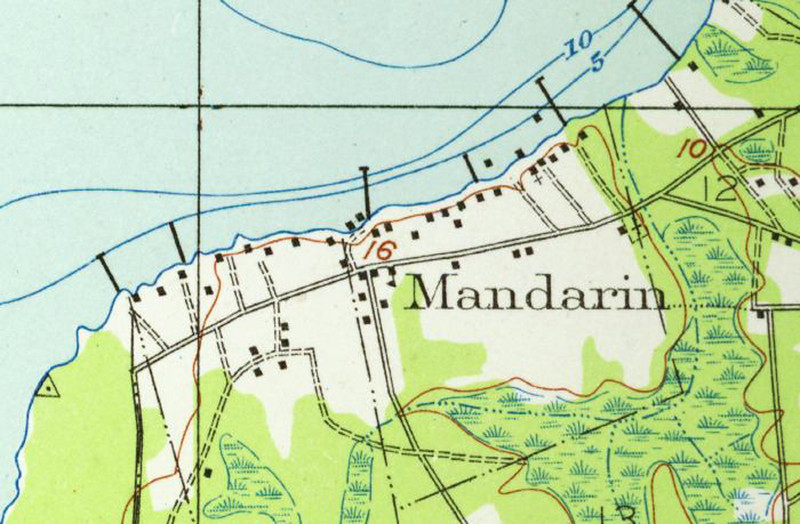 The late 19th century expansion of railroads throughout the state and several freezes resulted in Mandarin’s citrus production and economy falling into decline. By the start of World War II, the population had fallen to 645. After the war, the outward growth of Jacksonville and the 1971 opening of the Buckman Bridge led to the Mandarin that most recognize today. Despite being engulfed by an endless amount of modern autocentric development, a turn off the beaten path will reveal that the Mandarin Harriet Beecher Stowe and Romeo Murray once called home still retains much of its 19th century rural charm.

Here are several photographs providing a visual tour of Mandarin’s rural past.