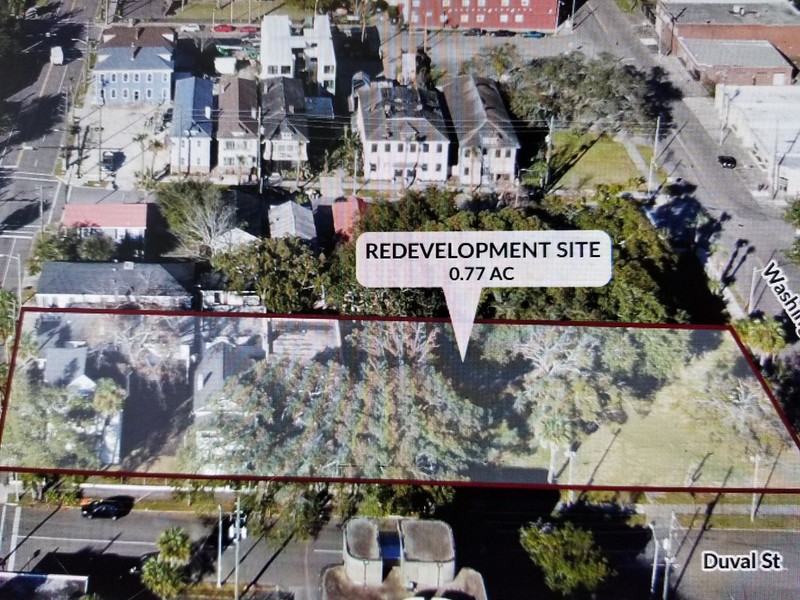 In recent months, the historic properties have been marketed as a potential 0.77-acre redevelopment site.

The property owner through Jack Kelley of Kelley Partners, LLC, has filed a building permit (B22-553915) to demolish three historic residential structures at the corner of East Duval Street and Liberty Street. While only one permit was filed under 411 East Duval Street, the stated scope of work includes the demolition of three buildings: 403 Liberty Street, 411 Liberty Street, and 411 East Duval Street. All three of these structures are identified as contributing properties in the Downtown Jacksonville National Register Historic District, listed on the National Register of Historic Places in 2016. Due to their contributing structure status, the demolition of the buildings requires the review and approval of the Jacksonville Historic Preservation Commission pursuant to §320.407, Jacksonville Ordinance Code.

The three properties are owned by individual Limited Liability Corporations that correspond with the associated addresses, but all three of the subject parcels, as well as the two vacant lots to the east extending to the end of the block (RE# 073632-0000 and RE# 073633-0000) have the same authorized manager, Barbara Butler Buck. Ms. Buck has provided a letter dated September 20, 2022 supporting Jack Kelley of Kelley Partners, who is under contract to buy all five properties, to explore demolition of the existing structures as part of his due diligence period and stating her opposition to local designation.

Based on the current owner’s letter of opposition to landmark designation of the three properties, the Commission must find the properties to meet at least four (4) of the seven (7) criteria outlined in the designation procedures for landmarks codified in §307.104, Jacksonville Ordinance Code before forwarding any landmark recommendation to City Council.

Staff reviewed the demolition application package, researched the properties, and conducted site visits on September 15 and 20, 2022 to evaluate and document the property. Based on this preliminary evaluation, the Planning and Development Department finds:

These two-story contributing single family and multi-family dwellings built between c.1903 and 1920 are indicative of what once was a much larger urban neighborhood of working-class families. This concentration of historic residential structures left in the northeast portion of downtown was noted in the National Register nomination listing.

This property located on the northeast corner lot of Liberty Street and East Duval Street is currently recorded by the Property Appraiser as 403 Liberty Street, but for most of its history it was known as 405 East Duval Street. Built shortly after the Great Fire of 1901, city directories show that it was originally the home of Janey Barbara Muller, widow of Gustav Muller, a German immigrant that came to Jacksonville c. 1880. Between 1882 and 1893, Muller had a wholesale groceries, grain, liquor, and tobacco business on East Bay Street (Meyer and Muller). By 1895, he had a new partner and concentrated on wholesale liquors (Muller and Robertson) with their business located in the 300 block of East Bay Street, known as the Muller Block. Upon his death in 1897, Gustav Muller; Jr., continued the family business, which later became the G. Muller & Company and proprietors of the Jacksonville Steam Bottling Works, which expanded to soft drinks. Bottles bearing the Muller name can still be found today. Another historic structure associated with Gustav Muller Sr. is his summer house at 304 South 1st St. in Jacksonville Beach, highlighted in the book Jacksonville’s Architectural Heritage and known as the oldest beach house still standing in the town.

In 1909, Janey and Gustav’s daughter, Ethel Dolores Muller married prominent Jacksonville businessman Maxey Dell Moody in her mother’s house. Janey Muller lived in the house until her death in 1928 at which time it became the home of her older daughter, Minnie O’Rourke, who stayed in it until her death in 1949, when it became the residence of her son, eventually passing to the current owner, Barbara Butler Buck, the great granddaughter of Gustav and Janey Muller.

Sometime between 1927 and 1951, the building was altered from a single-family home to having the upper floor as a separate living unit with the decorative spindle railing walled off and a new door added to the corner for accessing the upstairs apartment. Sometime before 1991, possibly 1958 based upon a reroof permit record, the original roofing, which was a fire-resistant material, likely metal shingle, was changed out to composition shingles. In 2008, its wrap-around porch was replaced with a deck. Beyond these alterations, the two-story house retains much of its original materials and details on both the exterior and interior, including an embellished front entry door, diamond shaped decorative windows/transoms, varying shingle shapes in the gable ends, the asymmetrical roof form with cross gables, boxed cornice, corner boards with crown-like capitals, 1/1 double hung wood windows, an east elevation bay widow, two sets of paneled pocket doors, four tile and mirrored fireplaces with unique designs, and an interior stair railing with paneled null posts. These significant features are of a high quality and contribute to the architectural style of the home, which exhibits elements of both the Queen Anne and Colonial Revival Styles. The wrap-around porch, featuring a hipped roof supported by Ionic Columns, is documented in size, placement and details through Sanborn maps and photographs on file, enabling it to be recreated to restore the historic appearance.

While the structure shows signs of its age and needs intervention to stop further damage by a tree growing close to the rear foundation, improvements have been made to the plumbing and roof as recent as 2009 and 2011.

According to the Florida Master Site File (FMSF) for this property, the two-story residence can also be classified as Colonial Revival, which is expressed through the front facing gable roof, boxed cornice, full cornice returns and full-width front porch. Similar to 403 Liberty Street, the design includes decorative shingles in the gable end and a horizontal wood drop siding exterior. Other character defining features include the two-story open porch with exposed rafter tails in the eaves supported by Tuscan columns and 2/2 double hung sash wood windows. Of the three structures, this building is in the worst condition, but can still be rehabilitated based on staff’s experience with structures in similar conditions. The interior has peeling paint, more debris, and more plaster failure from the ceiling. Like 203 Liberty Street. It was divided into two units (411 and 415) by adding an exterior stair to the east elevation and closing off the main staircase on the first floor (See pages 15-19). In 2012 at least one permit was pulled for an electrical upgrade to add an AC window unit. Despite the fallen plaster, it appears to be fairly dry on the interior, perhaps an indication that it did receive roof repairs under one of the other addresses.

Based on city directory research, the inhabitants of this house changed more frequently and the connection between these residents and the neighboring Muller family has not been fully documented by staff. With occupants changing yearly at times, it was likely used more as a rental, perhaps in response to those who lost homes during the Great Fire. More time would be needed to research all the names recorded in the city directories to determine if any are noteworthy.

The structure at 411 Liberty Street was built for Ethel Muller and Maxey Dell Moody a few years after they were married. Prior to moving into the new house, they lived nearby on the same block. The couple lived in the home and raised their family there. Of the three houses under review, it is in the best shape, made possible by its brick and stucco exterior. While there were some changes made to the rear of the building to connect it with a detached garage and to add a secondary dwelling in 1964, the original portion of the building has a high degree of architectural integrity with few changes to the original building layout and significant details on both the interior and exterior.

This two-story residence is identified in the Florida Master File as being an example of the Bungalow Style, also referred to as the Craftsman Style. Details associated with this style include exposed eaves and decorative rafter tails, square tapered columns set on masonry piers, and triangular knee brackets. Additionally, the structure exhibits some Prairie Style details with its overall horizontal emphasis seen in its low-pitch hipped roof with wide eaves, differing stucco material and coloration of the second story, and massive columns.

Maxey D. Moody was in the road building construction equipment industry. His business, M.D. Moody & Sons, was formed in 1913, incorporated in 1946 and later expanded by his son Maxey Dell Moody Jr. into Moody Truck Center, Moody Light Equipment Rental, the Moody Machinery Corporation, Moody Fabrication and Machine, Dell Marine and MOBRO Marine, Inc., taking his contributions to the construction industry into the 21st century. While not all the businesses survive today, three do. According to Wikipedia, Moody’s business once stood as the oldest family owned road equipment company in Florida. The Miami Herald obituary credits Moody with organizing the American Road Buildings Association.

Next page: The criteria and staff findings