The 4.4-mile Metromover in Downtown Miami.

Originally completed in 1986, Miami-Dade County’s Metromover is one of only three downtown people movers in the United States. By far the most successful of the three and a catalyst for transit oriented development, Miami-Dade County’s Department of Transportation and Public Works (DTPW) has announced plans to overhaul the aging subsystems responsible for keeping the Automated People Mover (APM) functioning as they approach the end of their design life spans.

A sibling of the Jacksonville Skyway and Detroit People Mover, the 4.4 mile Metromover system, is a free elevated transportation network shuttling residents and visitors around downtown Miami and Brickell. According to a recent Miami-Dade County press release, while the system has expanded and vehicles have been replaced, major subsystems responsible for keeping the Automated People Mover (APM) functioning have met their design life spans. In recent years, Metromover riders have experienced frequent service disruptions on all three system loops, and DTPW recognizes the need for an aggressive approach to replacing and repairing these subsystems to ensure reliability and accessibility.

As a result, the Miami-Dade County Board of County Commissioners adopted a Resolution approving the awarding of a contract to Bombardier Transportation (Holdings) USA, Inc. for the purchase of a Metromover Comprehensive Wayside System Overhaul.

Over the course of the next four years, the project will renovate subsystems including:

The project will include the design, supply manufacturing, installation, testing and commissioning of the Automated People Mover System into a fully functional Miami-Dade County Metromover System. Additionally, the new system will include Bombardier’s state-of-the-art Communication Based Train Control System (CBTC).

Once completed, the Metromover system enhancements will include:

The inside of a Metromover train.

In addition, once the track work is completed the system will be able to easily accept new vehicles and DTPW will start the procurement process for new Metromover cars. The project is anticipated to cost $153 million, including $22 million from a Federal Transit Administration (FTA) grant. Plans are also underway to extend the Metromover as a people mover system to Miami Beach, Wynwood, Midtown Miami and the Design District.

A different approach than the JTA Skyway 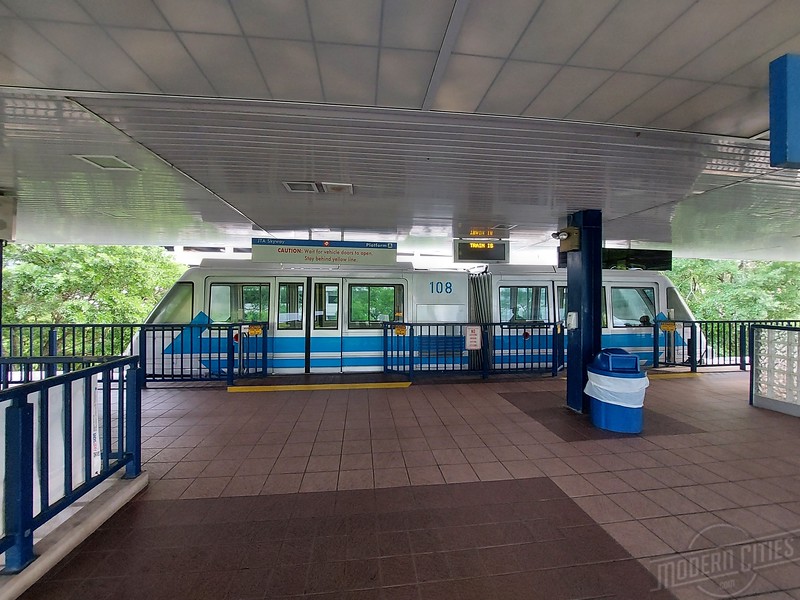 Miami-Dade’s approach to overhauling its aging downtown people mover system is shaping up to be dramatically different and significantly cheaper option that its Florida neighbor to the north. In Jacksonville, the Jacksonville Transportation Authority has proposed spending more than $420 million to retrofit the 2.5 mile JTA Skyway into an elevated road for lower capacity, slower moving driverless vehicles. This includes spending $246 million on the conversion of the 2.5 mile Skyway system to accommodate driverless vehicles and an additional $176 million to retrofit 7.5 miles of existing streets to accommodate driverless vehicles into adjacent neighborhoods. This project has become locally known as the Ultimate Urban Circulator or U2C.

The Jacksonville Transportation Authority’s “U2C” arose in 2017 came out of discussions on what to do about Jacksonville’s aging Skyway elevated people mover system. As announced, the plan would replace the Skyway’s monorail trains with a system of autonomous vehicles - essentially small, driverless buses. Though many aspects of the plan remain unclear, the proposal would replace the Skyway’s monorail cars with driverless vehicles, and also extend the system on city streets into other neighborhoods.

Believing the JTA Skyway is functionally obsolete, Jacksonville plans to spend $422 million to replace larger Skyway trains with driverless vehicles such as this.

While the Jaxson has positioned itself as a vocal critic of this particular project as currently proposed, with Miami-Dade’s recent decision to overhaul a much larger peoplemover system for a fraction of the U2C’s costs, time will soon tell which agency is making the best decision regarding the fate of their aging transit system. However, this is a show that won’t require Jaxsons to look outside of the state or country for comparable projects. A short drive down Interstate 95 will tell us all we need to know.