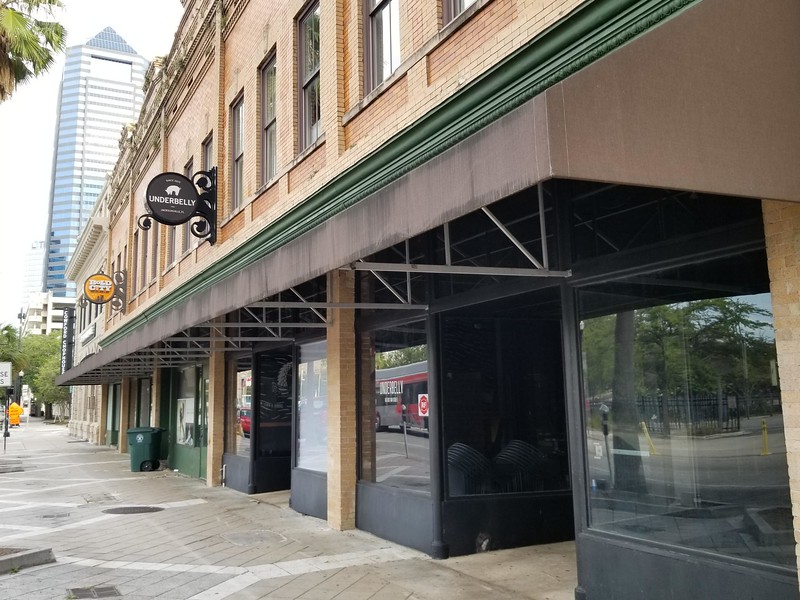 A highly anticipated Downtown project from the owners of 1904 Music Hall, Spliff’s Gastropub and Headroom Coffee Bar is here. In a August 13 Instagram post, owners Jason Hunnicutt and Duane De Castro announced the reopening of Underbelly, a much missed Bay Street concert hall that shut its doors in 2015. The first of several shows listed on the venue’s website features Brooklyn rapper 22Gz on August 20, 2021.

Underbelly was originally founded in January 2010 by Emily Moody-Rosete. The venue was initially based inside and behind Moody-Rosete’s clothing boutique Anomaly at 1021 Park Street in Five Points. The original Underbelly featured a 650 square foot interior wine bar tucked away at the back of the store and a larger outdoor space behind the building with a stage, tables, and lights strung between trees.

In June 2012, Moody-Rosete and Cameron Beard moved Underbelly to 113 East Bay Street, previously the site of Ivy Ultra Bar. The owners transformed the space from its previous industrial ultra lounge feel into a more intimate and organic aesthetic. The new location quickly became a signature part of the Downtown entertainment strip known at the time as “the Elbow” and gained a reputation as one of the First Coast’s best concert venues. Moody-Rosete later left the business and founded Wolf & Cub, a boutique located at 205 North Laura Street since 2016.

Underbelly’s closure in 2015 was a blow to Jacksonville’s music scene and struggling Downtown. Rumors circulated for years that new owners hoped to bring back the concert hall, but nothing materialized until February 2020. At that time, Hunnicutt and De Castro, whose other three businesses are on the Ocean Street side of the same block, announced that they’d signed a lease on the space with plans to reopen it. At the time, Hunnicutt told the Jacksonville Daily Record the venue would book live music from touring and local acts and feature a “heavy culinary component.” “Underbelly is an amazing spot to see a show, and we are thrilled to bring it back,” Hunnicutt told the paper. Despite setbacks due to COVID-19, the owners have maintained their lease with building owner Petra. With renovations complete and touring bands booking shows again, Underbelly is ready to open its doors to concertgoers once more.

The Jaxson has reached out to the owners of Underbelly for comment. This article will be updated with their response.