Image of Eartha M.M. White and her mother Clara White courtesy of https://www.floridamemory.com/blog/2013/02/21/eartha-m-m-white-tells-a-true-life-ghost-story/

1940s - The Ward Street red light district is shut down by Mayor Haydon Burns after health concerns are expressed by the US Navy. Soon bordellos are replaced by commercial warehouses.

1944 - Annual rail traffic at the Jacksonville Terminal peaks with 38,345 trains and 10 million passengers. Over 2,000 are employed at the LaVilla railroad station making it the second largest employer in the city behind Springfield’s King Edward Cigars (now Swisher).

1946 - 15-year-old Ray Charles Robinson moves to LaVilla to stay with friends of his mother after she dies. For over a year, he played the piano for bands at the Ritz Theatre in LaVilla, earning $4 a night. Charles moves to Seattle in 1947 after desiring to move to the farthest US location from Florida.

1947 - Adrian Kenneth “Ken” Knight became the first black radio announcer in the South when he went to work for a radio station in Daytona Beach. He moved to Jacksonville and produced the first black television program in Jacksonville, the Ken Knight Show which featured live gospel music on WJXT, TV-4. He continued working in radio and became the general manager of radio station WPDQ. He is also credited as one of the founders of the National Association of Television and Radio Announcers.

Owned by Manuel Rivera, Manuel’s Tap Room was a 24 hour lounge, grill and popular place for drinking, dancing and dining on Ashley Street. Courtesy of The Crisis, January 1942

1947 - The original 18-mile path of Jacksonville Expressway system is proposed. The selection of the expressway system’s routes was determined by avoiding areas deemed most valuable at the time, to eliminate “blighted” neighborhoods and serve as barriers to stop spread of “blight.” Deemed to be “blighted” neighborhoods, the expressway’s original route cuts through the center of each community.

The Jacksonville Expressway being over Myrtle Avenue. Image courtesy of the State Archives of Florida, Florida Memory, https://floridamemory.com/items/show/166846.

1950 - The Frolic Theatre closes. Now demolished, the site where the theatre stood is now the LaVilla School for the Arts.

1957 - The Knights of Pythias Building, the Ashley Street strip’s largest and tallest structure, is demolished for a proposed development that never comes to fruition. 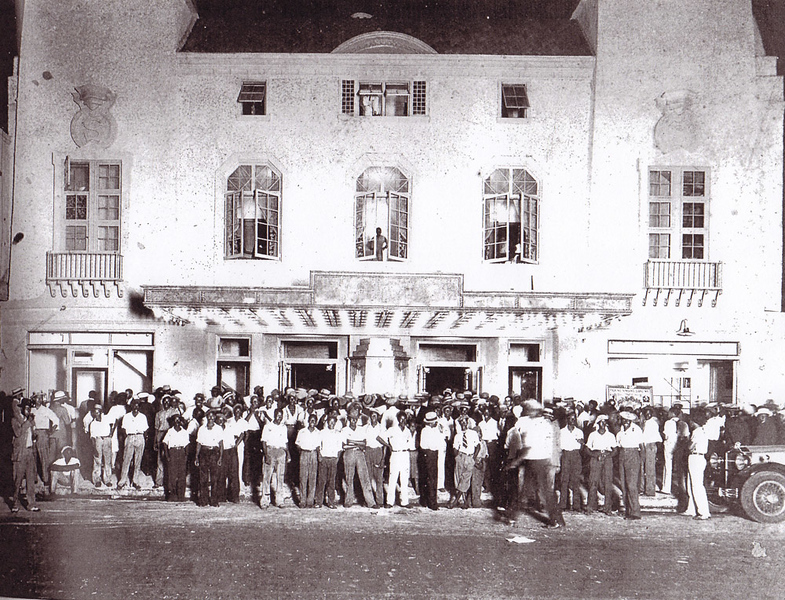 The Strand Theatre was located on the NW corner of Jefferson and Ashley Streets.

1960s - 75% of Sugar Hill’s families are relocated outside of neighborhood after their homes were demolished by the Department of Housing and Urban Development. The city threatened residents who refused to move by forcing them to remodel their homes and buy more property. Residents whose homes sat on 25-foot-wide lots had to buy additional property to meet the new 50-foot requirement.

1960 - On March 26, 1960, the second phase of the Jacksonville Expressway opens, linking Beaver Street in LaVilla with Heckscher Drive.

1960 - Ax Handle Saturday takes place on August 27, 1960 as a result of a Civil Rights sit-in demonstration at the lunch counter of downtown’s woolworths at Hemming Park. A White mob attacks the teenage demonstrators with ax handles. Riot ends once police jump in after a group of LaVilla youth, known as the Boomerangs, fit back to protect demonstrators.

1964 - The Civil Rights Act of 1964 is signed into law by President Lyndon B. Johnson, ending Segregation.

1966 - Brewster closes after suffering from competition from previously segregated medical facilities after the passage of the Civil Rights Act of 1964.

1968 - The Strand closes in December 1968 after National Theatre Enterprises fails to renew its lease.

1969 - The Strand is demolished after suffering significant fire damage. It’s location is now a part of the campus of the LaVilla School of Arts.

After the 1960s, however, the neighborhood entered a period of precipitous decline. Urban decay set in as the railroad industry declined and the construction of I-95 disrupted the neighborhood, and after the end of segregation, many residents left the area to pursue opportunities elsewhere.

1973 - Ken Knight dies in Jacksonville on September 12, 1973. He was the first black in the south with his own syndicated show on CBS. He played “The Night Train” to open and close every show. The Jacksonville, Fla., street named after him in 1962 - Ken Knight Drive - still bears his name. Was program director in 1949 at WERD, the first-black owned radio station.

1974 - The last Amtrak train leaves LaVilla’s Jacksonville Terminal on its way to St. Petersburg on January 3, 1974. A victim of high maintenance costs, decreased rail travel and civic shortsightedness, the terminal (once LaVilla’s largest and Jacksonville’s second largest employer) is closed for good.

Inside the Richmond Hotel in an article and photo tour of the building at Jax Psycho Geo.

During the 1980s the crack cocaine epidemic hit LaVilla hard, furthering the decline.

1990 - 394 families were relocated and the crime-riddled Blodgett Homes public housing complex was demolished. Today, the site is home to the 159-unit Blodgett Villas complex and a $42 million state office complex.

1993 - The River City Renaissance plan crafted by then Mayor Ed Austin allocated millions of dollars to renovating LaVilla. Dilapidated buildings were torn down and historical structures, like the Ritz Theatre, restored or reconstructed.

Looking west at the intersection of Ashley and Broad Streets during the early 1990s.

Timeline compiled by Ennis Davis, AICP. Davis is a certified senior planner and graduate of Florida A&M University. He is the author of the award winning books “Reclaiming Jacksonville,” “Cohen Brothers: The Big Store” and “Images of Modern America: Jacksonville.” Davis has served with various organizations committed to improving urban communities, including the American Planning Association and the Florida Trust for Historic Preservation. A 2013 Next City Vanguard, Davis is the co-founder of Metro Jacksonville.com and ModernCities.com — two websites dedicated to promoting fiscally sustainable communities — and Transform Jax, a tactical urbanist group. Contact Ennis at edavis@moderncities.com