1901 - The Great Fire of 1901 starts at LaVilla’s Cleveland Fibre Factory (a mattress factory at Beaver and Davis) and destroys the city.

1901 - Brewster Hospital opens, becoming the first African American hospital in Jacksonville. The hospital is named in honor of the late Rev. George A. Brewster, after Matilda Cutting Brewster of Danielson, CT donates $1,000 in his honor.

1901 - Along with seven other business associates, Lewis founded the Afro-American Insurance Association in 1901.

1902 - New Orleans and Jacksonville naturally become cultural exchange partners. LaVilla becomes a brief haven for Robichaux, a “legitimate” musician, during this period after the elimination of the relative privilege of the Creole racial distinction and just before the implementation of Florida’s most restrictive segregation laws.

1905 - Gertrude Pritchett, the bride of William “Pa” Rainey, a performer of Chappelle’s Rabbit’s Foot Company, joins the troupe and adopts the stage persona of “Ma” Rainey.

1908 - Film companies like Kalem, Pathé, Thanhouser, and Lubin built production facilities in the region to take advantage of its sunshine, tropical locations, and cheap labor.

1909 - Lionel D. Joel and Mr. Glickstein open the Colored Airdome Theater at 601 West Ashley Street. With a seating capacity of 800, the Airdome is said to be the largest theater exclusively for black people in the South.

1910 - The first published account of blues singing on a public stage occurs at the Airdome on April 16, 1910. In an Indianapolis Freeman Stage section article entitled “Jacksonville Theatrical Notes,” the reviewer states that Prof. John W. F. Woods, a ventriloquist, and his doll Henry, “set the Airdome wild by making little Henry drunk. He uses the “blues” for little Henry in this drunken act.”

1911 - The team of Rainey and Rainey joined the Globe Stock Company that January. At this time, Ma Rainey was billed as a “coon shouter” and the attraction of her powerful moan was undeniable. She was receiving three or four encores every night.

1912 - Chappelle’s Rabbit’s Foot Company is taken over by Fred Wolcott, a white carnival owner, who relocates the show’s headquarters to Port Gibson, Mississippi.

1912 - Booker T. Washington stops in Jacksonville in March. Eartha White, on behalf of the Jacksonville Negro Business League had invited him to address the subject of education and to speak out against lynching and other crimes against African-Americans.

1913 - By November of 1913, new motion picture houses in LaVilla created additional competition for audience dollars. Two white-owned movie theaters, the Frolic and the Palace (later renamed the Star) opened on Ashley Street to serve blacks only.

1915 - The Strand Theater opens at 701 Ashley Street on June 12, 1915. It rivaled the Apollo Theater in Harlem and the Regal Theater of Chicago for artistry and popularity in its heyday.

1916 - (The Great Migration) Large numbers of working class African-Americans, who had prospered during the rebuilding of Jacksonville after the 1901 fire, were beginning to leave the region. By 1916 recruiters from two northern railroads, the Pennsylvania and the New York Central were successfully drawing black workers away from Jacksonville. 16,000 African-Americans leave Jacksonville between 1916 and 1917 due to economic conditions, white militancy, and Jim Crow laws.

1917 - Stanton High School (the building that exists on Ashley Street today) is completed.

1919 - The $2.5 million Jacksonville Terminal opens on November 17, 1919. Modeled after NYC’s Penn Station, the train station is the largest south of Washington, DC 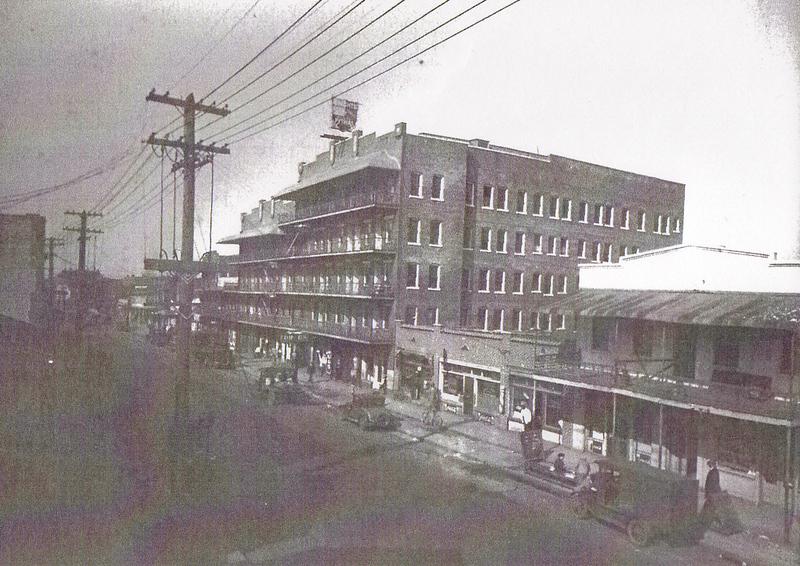 The Knights of Pythias Hall on Ashley Street.

1929 - Neil Witschen’s Ritz Theatre opens in September, becoming an important stop on the Chitlin’ Circuit and LaVilla’s primary performance venue. At the time, the area on Ashley Street west of Broad Street to and including Davis Street was known as the “Harlem of the South”. Landmarks included Nick’s Pool Parlor or the Strand, the Frolic and the Roosevelt Theaters for a diversion. The Wynn/Egmont Hotel provided the best accommodations for travelling entertainers; the Boston Chop House, Mama’s Restaurant and Hayes Luncheonette provided good food; the Lenape Bar and Manuel’s Taproom were the favorite watering holes. The Ritz Theatre and The Knights of Pythias Hall hosted numerous famous performers.