“Humanae” by artist Angélica Dass categorizes the skin tones of different individuals as a challenge to the concept of race. Its featured as one station of “The Bias Inside Us” at the Jacksonville Museum of Science and History. Raymon Troncoso/WJCT NEWS

This weekend is the last chance for Jacksonville residents to see it locally, before the project packs up Sept. 11 and moves on to North Carolina.

The interactive, thought-provoking exhibit calls upon visitors to reflect on their own life experiences with bias, prejudice and even bigotry.

“This exhibit will make you a little uncomfortable,” Anthony Mortimer, MOSH’s vice president of education and exhibits, said. “And that’s okay. That’s the message we want to convey. It’s okay to feel a bit off about what you learned about yourself. Let’s talk about it. What can we do about it? How can we work together?”

The exhibit made its debut at its only stop in Florida at a contentious time, as the state grapples with new laws that restrict discussion of race and sexuality in schools and workplaces.

“Bias” is a free-flow experience with no set path for visitors to explore each section. They range from artistic pieces like “Humanae” by Angélica Dass to sociology experiments, scientific models for biological and neurological origin of bias, multiple presentations on bias throughout history and interactive modules on bias and its empirical effects on American society.

According to Mortimer, visitors spend between 20 minutes and two hours inside the exhibit, depending on how they engage the interactive features and presentations. 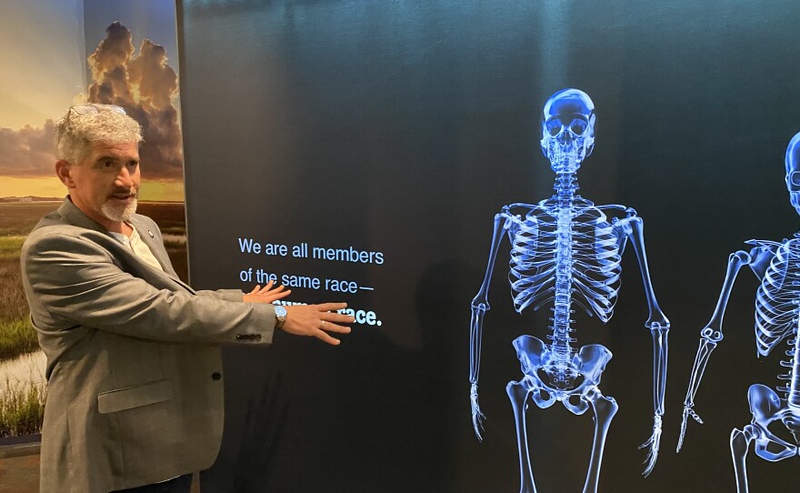 Anthony Mortimer, MOSH vice president of education and exhibits, reveals the entrance to “The Bias Inside Us” Smithsonian exhibit at MOSH. Raymon Troncoso/WJCT NEWS

“The Bias Inside Us” is a new step for MOSH. Mortimer characterizes it as an intentional step toward evolving the museum.

“This is something that our guests are probably not used to seeing,” he said. “This is something that we’re really trying to develop a habit and reputation of — yes, we’re focusing on regional history and science, of course, but we also want to look at our history through a cultural lens, and why does it matter now? How do we get where we are? What’s the best next steps for us together? Jacksonville is a beautifully diverse city.”

Beyond the exhibit, MOSH hopes to continue culture-based programming with a series of community education events. That includes an upcoming community conversation with Jacksonville sheriff candidate Lakesha Burton on crime and civic safety and a two-hour Q&A with Native American pride dancers.

Tied to the exhibit are two surveys from partner institutions that will be offered to visitors. One is from the Smithsonian to submit feedback for how to improve “Bias” for its next national run, and the other is from the University of North Florida’s psychology department to analyze patrons for a study on the complexities of bias.

Article by Raymon Troncoso originally published at WJCT News. Reporter Raymon Troncoso joined WJCT News in June of 2021 after concluding his fellowship with Report For America, where he was embedded with Capitol News Illinois covering Illinois state government with a focus on policy and equity. You can reach him at (904) 358-6319 or Rtroncoso@wjct.org and follow him on Twitter @RayTroncoso.