Before the McMansions, strip malls, and A-rated schools took over in the 1990s, northern St. Johns County was a quiet, rural backwater. The area didn’t lack in excitement, however, thanks to one particular country thoroughfare: Greenbriar Road. By day, Greenbriar was a little used, dirt paved shortcut that connected San Jose Boulevard to County Road 210. At night, however, it became “Ghost Light Road,” and it provided visitors with a singularly disconcerting experience: a lone spectral headlight that appeared to approach cars before vanishing into the perfect dark.

Locals report that the light was seen from at least the 1960s into the early 2000s. In 2005, Chuck Mulligan, spokesman of the St. Johns County Sheriff’s Office, told The Florida Times-Union that “for at least the past 40 plus years, the legend of the Greenbriar light has been around.” In 2001, however, sightings abruptly ceased as mysteriously as they began. This only sparked further speculation about whether the stories had been true and if so, what exactly the light was and where it went. A few area roads and private drives offer a glimpse of what the Ghost Light Road once looked like.

During its heyday, the Ghost Light Road was a popular destination for legend tripping: the right of passage in which young folks brave locations associated with frightening legends for purposes of initiation, rebellion, or just a good time. Sgt. Mulligan was one such legend tripper, telling the Times-Union, “even my wife and I used to come out there when we were dating hoping to see the light appear.” Ghost Light Road came to feature consistently in books and websites on ghosts and unexplained mysteries.

I was another of those legend trippers, and can personally vouch that the ghost light was a very real phenomenon. I was introduced to it in 1997 by my friend Jeff Lang during a late night ride in my 1984 Buick Riviera. Jeff’s family was among the many who moved from Duval County to St. Johns in the 1990s, ushering in the area’s transformation from rural outland to sprawling exurb. That transition would eventually mean the end of the the ghost light – more on that in a bit – but between 1997 and 2001, I witnessed it on several occasions, with different people and at least a few times without intoxicants involved.

The legend of Ghost Light Road 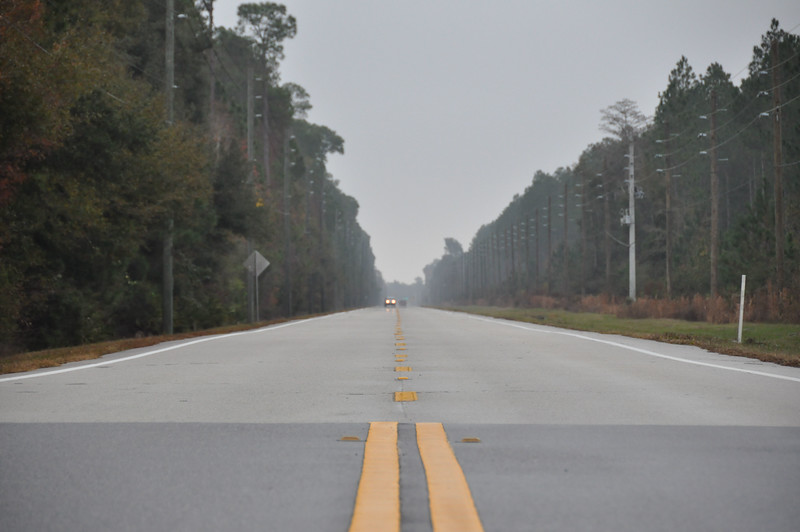 Headlights on Greenbriar Road in 2015.

Like any good apparition, the ghost light had an accompanying legend explaining its origin. The version I heard came from Jeff Lang, who in turn heard it from neighbors in the Switzerland area. It’s pretty consistent with the accounts that have made it into print or online in such publications as Haunted Places: The National Directory, Weird Florida, and Jax Psycho Geo.

As the story goes, the ghost is a young motorcyclist from the area whose father had warned him about speeding on the dirt road. One fateful day, the young man’s brother strung a rope across Greenbriar. This prank merely would have unseated the cocky rider had he heeded his father’s admonition, but, unfortunately, he gunned the engine and lost his head. Thereafter, his ghost shined his headlamp down Greenbriar in a nightly vigil, either searching for his lost head or warning others against being so reckless.

This story, a variant of the ancient headless horseman legend popularized by Washington Irving’s The Legend of Sleepy Hollow, is apocryphal. Nonetheless, it did a bang up job of setting the mood for a trek to Greenbriar. It’s difficult to describe now exactly how eerie this dark, heavily wooded road was during its stint as a haunted byway, especially for those only familiar with its current existence as a suburban arterial. But this simple road has a very long history that may offer an explanation for the ghostly phenomenon in an unexpected way.

Next page: New Switzerland – the history of Greenbriar Road