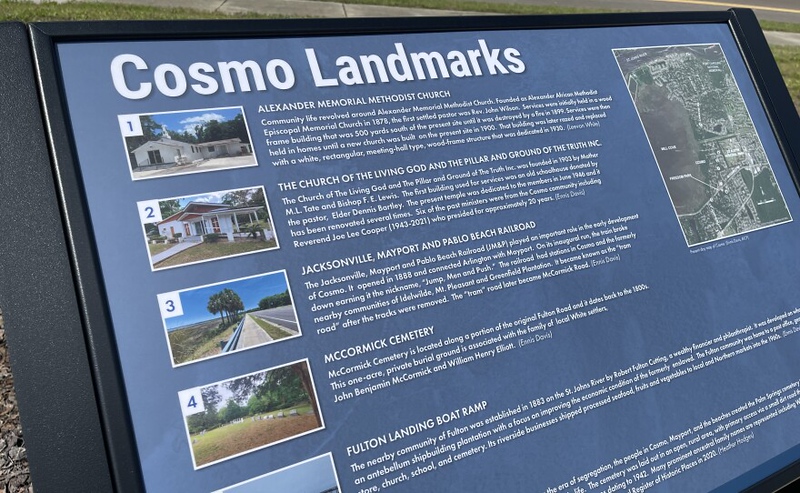 A new park tells the story of the Cosmo neighborhood in Jacksonville, a coastal community built by formerly enslaved people more than a century ago along McCormick and Fort Caroline in Arlington.

According to the city officials planning a dedication ceremony Friday, Freedom Park is the first public marker in Jacksonville honoring Gullah Geechee people — descendants of Central and West Africans who were enslaved in the Carolinas, Georgia and northeastern Florida.

The park stands as a testament to the work of the Cosmo Historical Preservation Corp. and one woman in particular who spearheaded the project: the late Rev. Ethel Deloris Demps. She is a direct descendant of the post-Civil War Black settlers in Cosmo. A plaque stands in her honor at the park.

To many Gullah descendants, the Cosmo neighborhood is largely unrecognizable to what it once was.

“The properties that were down there — I don’t want to say “taken,” but, you know, they were taken advantage of. They were older people. They didn’t know,” Ethel Demps told WJCT News six years ago.

Ethel Demps’ son, Cory Demps, said Freedom Park is a result of her vision to protect and preserve Cosmo’s historical significance in Jacksonville.

“I know she’s looking down on us, and she’s very proud of what has happened here,” Cory Demps said of the park. “It’s her vision, and this is what she wanted to see and it’s come to fruition.”

He is among a group of people who grew up in Cosmo and are carrying on their parents’ and grandparents’ legacies. Demps remembers his childhood in the Cosmo neighborhood fondly.

“Me and my cousins would go to the marsh … we just went back there shrimp, fish and just had a blast. It was our safe haven,” Demps said. “We didn’t worry about the street lights going out because you always had somewhere to go; everyone knew everyone. It was like home for us.”

Anthony Williams also grew up in the neighborhood and now hopes Freedom Park will help teach his own kids about their heritage.

“Making sure that our kids are aware of the area. You know, a lot of portions of the Cosmo community have been sold off through various new developments,” Williams said. “It’s really kind of educating them on their historical background and where they come from, and what the area means to our family.” 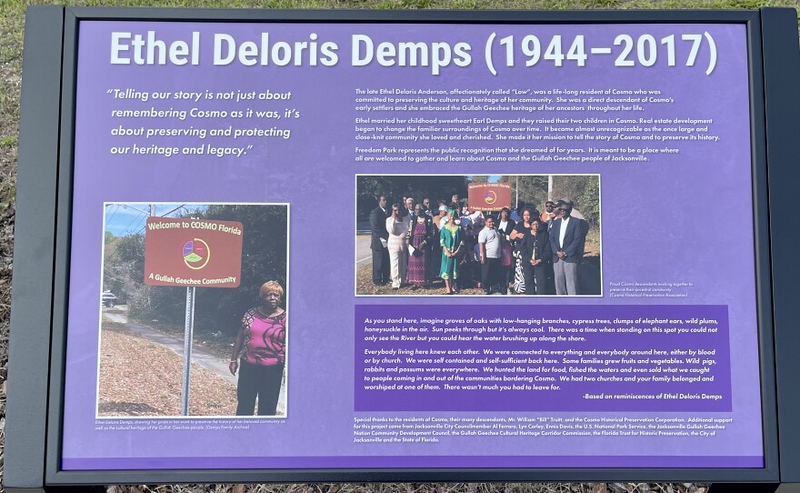 On Saturday, the Cosmo Historical Preservation Association will hold a heritage celebration with music, food trucks and performances, including a traditional Gullah Geechee call and response and sweetgrass basket weaver.

Art will be on display to celebrate Gullah Geechee people and Cosmo’s history, according to Wendy Truitt Smith who has helped planned Saturday’s heritage celebration.

“A lot of the people who will be entertaining are the grandchildren, the children of, the great grandchildren of residents of Cosmo now so they they have a direct link to the original descendants,” Smith said.

She added that Freedom Park is only the beginning of a vision to preserve the legacy of Cosmo. Part of the Cosmos Historical Preservation Association’s vision is to provide educational tours for kids.

“Kids, when they recognize a community that looks like the one that they’re from and they see the growth and the potential, it sparks something in you,” Smith said. “You don’t have to have a huge monument put up to it — just something that says we were here, we contributed, we are proud of who we are and we welcome you.”

Leevon White, the current president of the Cosmo Historical Preservation Corp., said the weekend’s celebration is the culmination of hard work between community members, the city and councilman Al Ferraro.

“It’s been a long road, and I can’t take the credit for it. It’s been a collaborative effort,” White said.

The state Legislature allocated about half-million dollars to the project. Freedom Park is also dedicated to veterans with Post Traumatic Stress Disorder.

One side of the park has plaques educating the public about PTSD among veterans; the other side has plaques about the history of Cosmo and Gullah Geechee people in Jacksonville.

The city of Jacksonville’s dedication ceremony will take place at 10 a.m. Friday at Freedom Park. The Cosmo Heritage celebration will be from 11 a.m. to 4 p.m. Saturday.

Article by Claire Heddles originally published by WJCT News. Claire joined WJCT as a reporter in August 2021. She was previously the local host of NPR’s Morning Edition at WUOT in Knoxville, Tennessee. During her time in East Tennessee, her coverage of the COVID pandemic earned a Public Media Journalists’ Association award for investigative reporting. You can reach Claire at cheddles@wjct.org or on Twitter @ClaireHeddles.