In the midst of James Weldon Johnson’s multi-front efforts for the National Association for the Advancement of Colored People (NAACP), a new assignment was handed to him. His board of directors asked him to visit American-occupied Haiti and report back.

Haiti’s history had been troubled for many years. Although its revolt against French colonization in 1804 had made it the second independent country after the U.S., in all of the Americas, foreign powers, including Napoleon Bonaparte, continued their meddling in its affairs.

The resulting instability and vulnerability prompted President Woodrow Wilson in 1915 to send the Marines in what turned out to be a 20 year occupation of Haiti.

Although Johnson and many other opinion leaders initially supported occupation, the severity of it began to raise considerable apprehension. In spite of press censorship, “reports of the harsh conditions due to the American occupation kept leaking through to us,” he wrote.
When the Marines jammed a new constitution through the Haiti legislature in 1918, alarm swept through many an American mind, including the board of NAACP. It would be 1920 before there were sufficient resources to send Johnson and one of his board members for a first hand report.

Before deciding to go, Johnson met with Theodore Roosevelt for his thoughts. Of their meeting, he wrote: “(Roosevelt) was enthusiastic about the mission, and thought I ought to be able to do a good job. The former president prepared a letter for my use, and as I left him, he slapped me on the shoulder and wished me good luck.”

Once on the island, Johnson’s companion soon fell ill and returned to the States, while Johnson spent a month visiting throughout the island, interviewing citizens, Marines and national leaders. In the countryside he found ring dancing not unlike the ring shouts he had witnessed in the Bahamas and the American South, including Jacksonville. 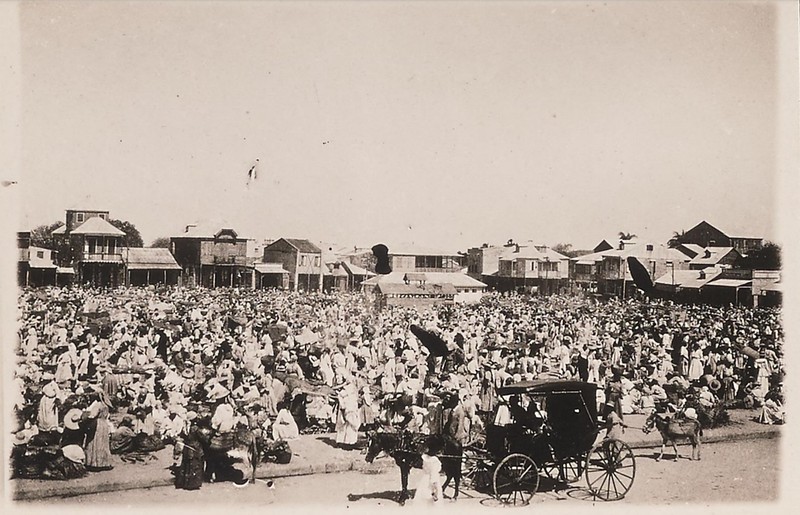 The depths of Johnson’s exploration of the Haitian condition are reflected in the findings he made. The two power structures he identified were the National City Bank of New York, which controlled the economy, and the Marines, who controlled the government. They were paid from the Haitian treasury, and Johnson considered the bank as more harmful because it stifled the country’s chances of economic independence.

Johnson had a couple of recommendations for his Haitian hosts. He urged them to commit their spoken Creole dialect to writing. Most Haitians spoke no French, but had no written language of their own.

His second suggestion was that a pattern of organization similar to the NAACP’s be established. He told them “that external help could not be effective unless that Haitian people were active.” A nationwide organization named the Union Patriotique followed. It “exerted a vital force in advancing the restoration of Haitian independence to the point it was realized,” he wrote.

Johnson wrote a four part series of his findings for The Nation magazine. Of greater impact was his briefing of Warren G. Harding, the GOP candidate for president in 1920. “Mr. Harding was quick to see the importance of this data as campaign material,” he wrote, “but he was cautious. He wanted the fullest verification possible.” Johnson had no trouble documenting his findings and Harding used them to great advantage in winning the White House back from the Democrats, as Roosevelt had anticipated.

Once Harding was in office, the Senate mounted its own investigation, which led to a number of reforms of U.S. operations in Haiti.

Johnson later commented in a letter to a friend: “I do not believe we can train the Haitians for self-government by taking their government away from them and running it ourselves.” He surely believed the same was the case for the Haitian economy.

*Guest article by John “Jack” F. Gaillard. Mr. Gaillard is an attorney that has written extensively about the life of James Weldon Johnson. This is an article about his mission in Haiti. *