After Van Zant’s mausoleum was vandalized in 2000, his family had his remains moved to Riverside Memorial Park in Westside Jacksonville. There they were sealed in an underground vault beneath a concrete slab to prevent further problems. Like the mausoleum, Van Zant’s tombstone, which is reportedly not directly above the actual grave, has become a shrine for fans and wellwishers. In the same area are the graves of Van Zant’s parents Marion and Lacy Van Zant, as well as a bench marked with the family name. Many other members of the Van Zant family are buried in Riverside Memorial Park, including Van Zant’s sister Suzan Marlene Van Zant Hodge and cousin Jimmie Van Zant, also a musician. Guitarist Allen Collins (1952 – 1990) was, along with Ronnie Van Zant and fellow guitarist Gary Rossington, a founding member of Lynyrd Skynyrd. He survived the 1977 plane crash, but tragedy followed him the rest of his life. After Skynyrd disbanded, Collins joined Rossington, fellow Skynyrd players Leon Wilkeson and Billy Powell, and new musicians to form the Rossington Collins Band. Following the unexpected death of his wife Kathy Collins in 1980, Collins’ behavior became erratic and the band broke up in 1982. Collins then formed the Allen Collins band with Wilkeson, Powell, and others, but found less success. In 1986, Collins was involved in a car collision that killed his girlfriend Debra Jean Watts and paralyzed him from the waist down. His injuries left him unable to play in Lynyrd Skynyrd reunions, but he made frequent appearances on stage with the reformed band.

Collins died in 1990 of pneumonia, a complication of his injury. He was buried in the western part of Riverside Memorial Park, across Normandy Boulevard from where Van Zant’s remains would eventually be relocated. He is buried with his wife, Cathy, and near other members of the family. A memorial bench bearing the Collins and Johns name is nearby. Leon Wilkeson (1952 – 2001) joined Lynyrd Skynyrd in 1972 to replace departed bassist Greg T. Walker. After a hiatus, he rejoined the band in 1973 and remained their bassist until they disbanded. Known for wearing unusual hats while performing, he played a significant part in cultivating the band’s riotous stage presence. After the plane crash, Wilkeson played with fellow Skynyrd members in the Rossington Collins Band and the Allen Collins Band, and he joined the reunited version of Lynyrd Skynyrd in 1987. He died in 2001 after suffering from lung and liver disease for several years, and was buried in Riverside Memorial Park directly across from the grave of his former bandmate Ronnie Van Zant. 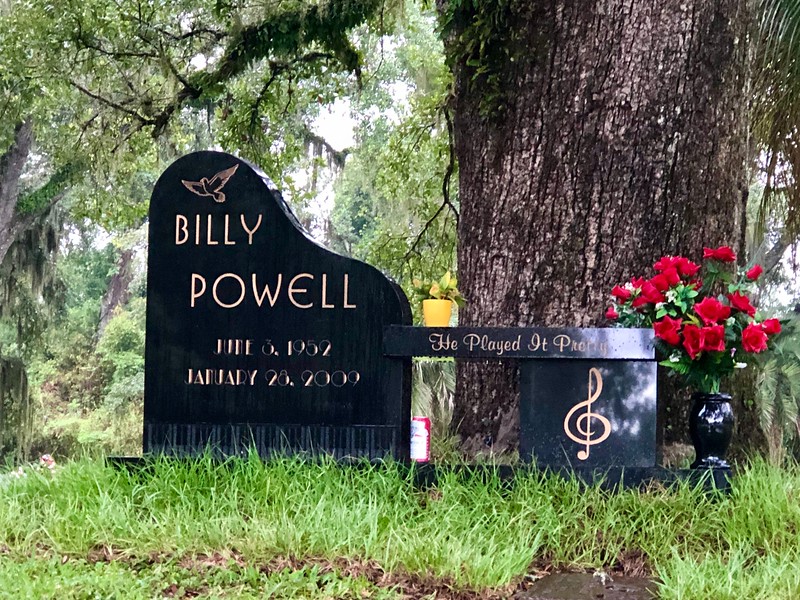 Billy Powell (1952 – 2009) joined Lynyrd Skynyrd as keyboardist in 1972. A childhood friend of Leon Wilkeson, Powell was classically trained on piano from a young age. He first joined Skynyrd’s crew as a roadie in the early 1970s, and according to the story, the band was oblivious to his talents for over a year until Powell sat down at a piano and played a version of “Free Bird.” Ronnie Van Zant immediately decided the band needed a keyboardist. Powell’s work on the Hammond organ and piano became a signature element of the Skynyrd sound.

Following the plane crash, Powell provided keyboard for 38 Special, the Southern rock band fronted by Van Zant’s brother Donnie, and joined his bandmates in the Rossington Collins Band and the Allen Collins Band. He joined the reformed Skynyrd in 1987 and remained at the keys for over 30 years until he suffered a fatal heart attack in 2009. Powell was reportedly cremated and he had no headstone for several years. In 2020, a headstone was placed for him at Riverside Memorial Park, close to the graves of Wilkeson and Van Zant. It is in the shape of a grand piano and bears a quote from Van Zant about Powell’s skills: “he played it pretty.”

Leonard Skinner (1933 – 2010) was not a musician, but he has a place in the history of Southern rock as the namesake of Lynyrd Skynyrd. Skinner was a gym teacher and coach at Lee High School when Van Zant, Collins, and Rossington attended, and was known for strictly enforcing the school’s code forbidding boys to sport long hair. Naturally, this did not sit well with the young musicians, and they renamed their band “Lynyrd Skynyrd” in a tongue in cheek tribute. For his part, Skinner stated that he was only following the school’s rules and never singled out the band members.

After retiring from coaching in 1970 Skinner went into real estate. He and the band members became friendly, and he provided a picture of a sign for Leonard Skinner Realty for their 1975 album Nuthin’ Fancy. He also capitalized on his fame by opening a bar bearing his now famous name. When Skinner died, The New York Times called him “arguably the most influential high school gym teacher in American popular culture.” He was buried in the western part of Riverside Memorial Park, not far from his former student Allen Collins.

Jimmie Van Zant (1957 – 2016) was the first cousin of Ronnie, Donnie, and Johnny Van Zant, and a musician in his own right. His musical style was strongly influenced by his famous cousins, particularly Ronnie. He reveled in the family connection, which he considered a legacy to be upheld. He got his start playing festivals and local shows on the First Coast and went on to recording and touring. His third album, Feels Like Freedom, got some attention on the country radio circuit and produced two singles. He died in 2016 of complications from cancer, and is buried in Riverside Memorial Park along with many other members of the Van Zant family.

Dave Hlubek (1951 – 2017) was lead guitarist and founder of the Jacksonville band Molly Hatchet. Though the band had been together since 1971, it was not until the release of their self-titled first album in 1977 that they found national success. The primary songwriter on the band’s first six albums, Hlubek departed in 1987 amid problems with substance abuse. He subsequently played in a variety of bands, and in 2005 he rejoined Molly Hatchet. Though health issues precluded him from playing in all shows in the last few years of his life, he remained active in the band until his death. He was buried in Riverside Memorial Park, across Memorial Park Road from the graves of Ronnie Van Zant and Leon Wilkeson.

Larry Junstrom (1949 – 2019) was a member of two prominent Southern Rock bands from Jacksonville: Lynyrd Skynyrd and 38 Special. A founding member of Skynyrd, he played bass in the early incarnations of the band from 1964 until being dismissed in 1971, before their first album. He was replaced by Greg T. Walker and later by Leon Wilkeson.

In 1976, Junstrom joined 38 Special, founded by Donnie Van Zant, the younger brother of Skynyrd frontman Ronnie Van Zant. He replaced original bassist Ken Lyons in time to record one track, “Fly Away,” for the band’s self-titled debut album, and played bass on all of their subsequent 11 albums. Junstrom, the “big man on the big bass,” retired in 2014 following a hand surgery that prevented him from playing. He died in 2019 and is buried at Jacksonville Memory Gardens in Orange Park, not far from the original gravesite of Ronnie Van Zant.