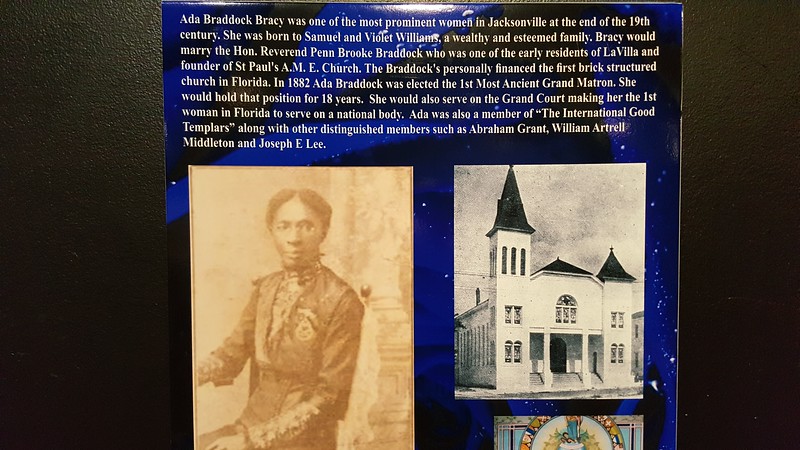 Ada Braddock Bracey was one of the most prominent women in Jacksonville during the late 19th century. Elected the 1st Most Ancient Grand Matron in 1882, she and her husband personally financed the first brick structured Black church in Florida. (Leading Black Masons & Eastern Stars exhibit at The Ritz Theatre& Museum)

We—the Jessie Ball duPont Fund and Ennis Davis of The Jaxson Magazine—invite you to join us on March 31 as we celebrate Women’s History Month with a virtual conversation about the many unsung female heroes who shaped Jacksonville’s historic LaVilla neighborhood and grew it into a thriving business and cultural center in the 20th century. From its founding to its heyday, from Susie King Taylor and the Eastern Stars of the Masonic Temple to Cora Crane and Eartha White, we’ll honor the women who played a role in the development of this neighborhood and contributed so much to our city.

Moderated by Ennis Davis, historian, urban planner and co-founder of The Jaxson Magazine, panelists include:

This conversation is part of the Jacksonville History & Heritage series co-produced by the Jessie Ball duPont Fund and The Jaxson Magazine.

Cora Crane with author Stephen Crane in 1899. A LaVilla bordello and property owner, Crane played an important role in the creation of LaVilla as an early epicenter for Ragtime, Jazz and Blues. (State Archives of Florida)

A 1925 photograph in front of Bethel Baptist Institutional Church with Margaret Murray Washington (center) of Tuskegee, AL. Washington was known as great anti-lynching activist. She was credited for co-founding the National Association of Colored Women in 1896. Thanks to the University of North Florida Special Collections and University Archives for the historic images.