Along with Bowden, Summerville, Nesbitt, Eaton, Pittsburg, Register and Clarksville, Greenland is one of several forgotten communities that sprouted up along the FEC railroad between Jacksonville and St. Augustine in the late 19th century. However, unlike the other communities that have largely disappeared over time and sprawl development, Greenland is a quiet and small ghost town that still exists.

Cedar Street, the main road into Greenland is a narrow thoroughfare paralleling a lumberyard that connects the community to Philips Highway.

Largely hidden from sight, despite 273,500 vehicles passing within walking distance each day, Greenland’s scenery largely remains the same as it was one hundred years ago. Greenland was established after the civil war along the Old King’s Road. Still in operation, its Mount Zion Missionary Baptist Church was established by freedmen in 1867. The King’s Road was originally constructed by the British in the early 1770s to open the coast of Florida up for the establishment of plantations along nearby waterways. Reverting back to wilderness by the time the United States took possession of Florida, it was rebuilt by the U.S. Army between 1828 and 1831. 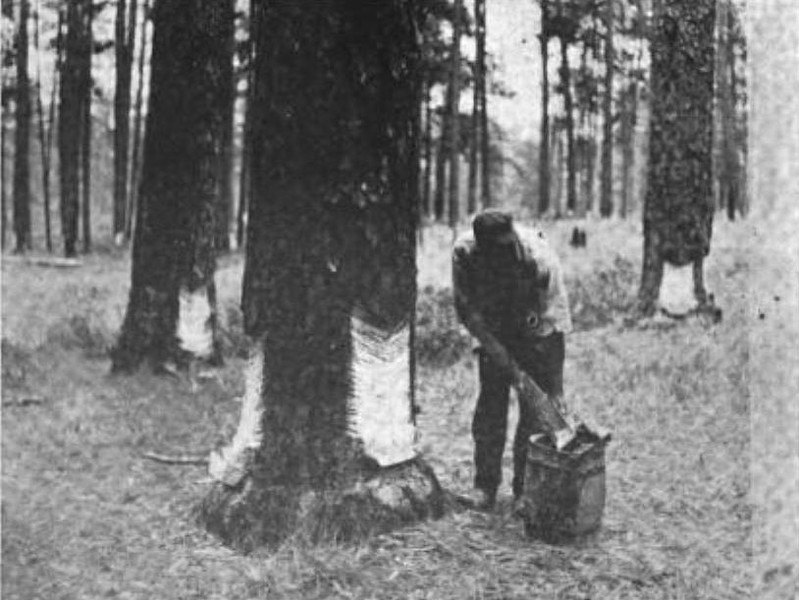 Collecting the crude gum from the cups after it has dripped from the tree into the receptacles. Courtesy of Naval Stores: History, Production, Distribution and Consumption, 1921.

The turpentine and resin industry was a driving economic force for rural southern Duval County communities like Greenland during the late 19th century as Jacksonville emerged as the Atlantic capital of the naval stores industry. Collectors were mostly African-Americans who scraped gum, or tree sap in area pine forests into barrels for transportation and ultimate processing in Jacksonville into turpentine. Located just north of Sweetwater Creek, Greenland’s network of dirt streets still contain names after various trees including Cedar, Pine, Elm, Magnolia and Ash.

Another economic boost would come to Greenland in the form of one of Jacksonville’s earliest railroads. Between 1881 and 1883, the Jacksonville, St. Augustine and Halifax River Railway was constructed parallel to the King’s Road between Jacksonville and St. Augustine. In 1885, it was acquired by Henry Flagler who then widened the tracks to standard size and eventually renamed the rebranded the railroad as the Florida East Coast Railway Company in 1895.

An abandoned residence dating back to 1917 on Pine Street.