The UNF Downtown Center was a branch of the University of North Florida that opened up for classes in September of 1978. UNF selected downtown’s Western Union Building overlooking Hemming Park as an extension of their university for several reasons. For one, transportation was a huge issue, as no bus routes to UNF’s main campus existed on the Southside at this time. They also wanted to increase enrollment, and they valued the proximity of this location to downtown’s businesses and employees.

The UNF Downtown Center was nearly 8,000 square feet, with 8 classrooms, office spaces, and library-classroom hybrids. It offered both credit and non-credit earning courses Monday through Friday from 7 AM until 10 PM. Classes were drawn from the Arts and Sciences, Business, Education, and General Education university curriculum.

Enrollment for the first year stood at 1,840 students. In the years that followed, enrollment continued to climb, reaching a peak of 2,247 students in 1981. However, after 1981, a rapid decline in attendance would occur due to factors such as cutbacks in student aid and decreases in course offerings. In 1987, less than 500 students were enrolled. Struggling with rising building maintenance costs and declining enrollment, UNF decided to close their downtown campus in August 1987.

Rather than giving up, UNF tried changing their approach. That same year, UNF opened the Downtown Service Center (DSC). While the actual service center resided in the building that is known to us as the Drew Building, classes were held in various buildings across downtown, in meetings rooms or lounges. The actual center itself acted mostly for a spot for people to register, pay fees, and receive information. Unfortunately, enrollment numbers the first year were even lower than the last year of the Downtown Center in 1987, and the DSC closed in 1988. UNF returned to Downtown in 2009 when it acquired MOCA Jacksonville, located in the building once home to UNF’s downtown campus. The school also has classes at the Center for Entrepreneurship and Innovation in the Barnett.

Cookman Institute image courtesy of the University Library, The University of North Carolina at Chapel Hill at https://docsouth.unc.edu/church/stowell/ill19.html

The Cookman Institute was founded by Reverend S.B Darnell in 1872. Darnell named the institute after the Reverend Alfred Cookman, who gave money for the construction of the school’s very first building. The Cookman Institute was the first institution of higher education for African-Americans in the state of Florida, specializing in the religious and academic preparation of teachers. Located at the intersection of Beaver and Hogan Street and associated with Atlanta’s Clark University, classes were available during the day and night.

When the original campus was destroyed during the Great Fire of 1901, it was decided that a new institute would be built on the outskirts of town. The selected site was in the Sugar Hill neighborhood near the intersection of Davis and West 8th Streets. After the rebuild, Cookman had classes from elementary through high school, and also offered specialty courses in normal training, music, domestic science, sewing, public speaking, shoemaking, printing, business, and agriculture. At the time, enrollment stood around 250.

One of Cookman’s students, A. Philip Randolph, would go on in life to become a key figure in the Harlem Renaissance and the civil rights movement. Randolph, who died in 1979, even played a major role in the 1963 March on Washington where the Rev. Martin Luther King, Jr. delivered his “I Have a Dream” speech.

The Cookman Institute’s original location at Beaver and Hogan Streets in 1897.

The educational opportunities for African Americans at this time were inadequate, despite the fact that much of the population was black. As a result, there was a huge demand for teachers, and the Cookman Institute thus received a new principal, Professor Issac Miller, and merged with the Daytona Normal and Industrial Institute, which had been founded in 1904 by Dr. Mary Bethune. Bethune had a vision similar to Cookman’s. When the merger was finalized in 1925, the school became the Daytona-Cookman Collegiate Institute. In 1931, the school’s name was officially changed to Bethune-Cookman College. On February 14, 2007, the Board of Trustees approved the name Bethune-Cookman University (BCU) after establishing its first graduate program. With an enrollment of 4,037 students, BCU’s 82-acre urban campus is located near downtown Daytona Beach.

After the institute vacated the Jacksonville campus, the property was purchased by the Duval County School System. At the suggestion of Jacksonville activist Eartha White, the school was named Darnell-Cookman in honor of both Reverends S. B. Darnell and Alfred Cookman. Today, the Darnell-Cookman School of the Medical Arts is a medicine-focused magnet school, designated an “A” school in the State of Florida’s school grading system and a National Blue Ribbon School as designated by the USDOE.

In 1934, William J. Porter established the William J. Porter University as a private two-year college. Initially classes were held in the First Baptist Church’s Educational Building downtown. Only 60 students were enrolled for the first year.

In 1935, the school’s name was changed to Jacksonville Junior College (JJC) and classes were moved to the Haddock Business University classrooms at 517 Laura Street. The following year, the school relocated to the Florida Theatre Building, occupying the entire second floor. While downtown, JJC colors changed from scarlet and white to green and white. In 1944, the school moved again. This time, it relocated to the Kay Mansion at 704 Riverside Avenue. This location would be short lived as well with the building sitting in the path of what would eventually become the Fuller Warren Bridge. However, during the school’s stay in Riverside, the name “Green Dolphins” was selected through a student contest. Other options considered included the Green Raiders, Green Marlins, Buccaneers, Juggernauts and Green Dragons. 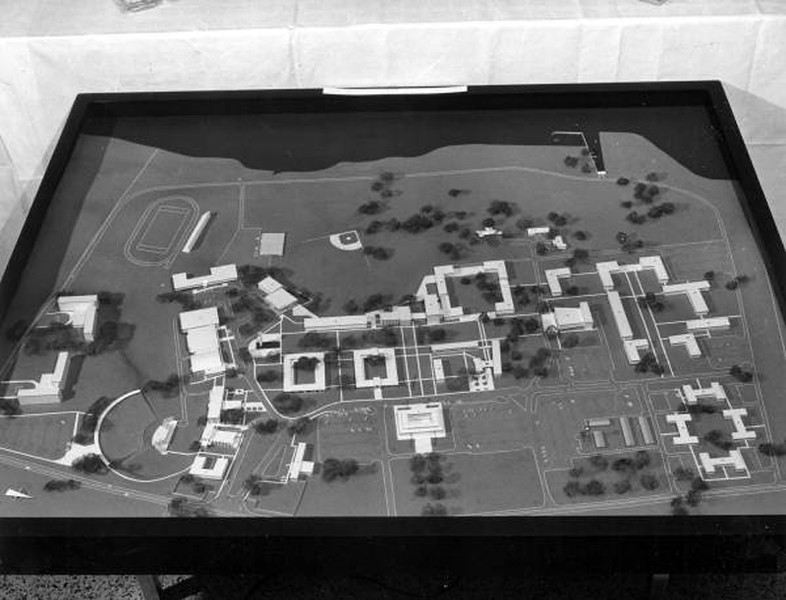 Enrollment exploded with a large influx of students after the end of World War II, requiring the school to secure a permanent location. A riverfront site in Arlington was the school’s selected location. In 1950, the Jacksonville Junior College relocated to Arlington with its first classes beginning on December 7th. JJC became Jacksonville University in 1958. In the following years, it developed into a fully accredited senior college.

With an enrollment of 4,222 students and +180 academic staff, Jacksonville University has grown to become a notable local educational institution offering over 70 majors and programs at the undergraduate level, as well as several Master’s and doctorates programs at its 240-acre Arlington campus.