*Timucua two spirits carrying the dead on biers, and carrying the wounded on their backs. From an engraving by Theodor de Bry

Florida’s LGBTQ history begins thousands of years before Europeans arrived. Before colonization, most Native American societies in North America had gender roles for people of a mixed or third gender – people known today as two-spirits. Among the earliest existing sources for two-spirits come from the Timucua people of North Florida, who first encountered Europeans in the 16th century.

“Two-spirit” is a modern English blanket term for Native American people who belong to a third gender, or non-binary gender, other than male and female. The term two-spirit does not refer to a person’s biological sex (their physical anatomy), but to their gender, which is characterized by social roles and varies from culture to culture and person to person. Most Native American cultures have or once had a third gender, or more, with their own gender roles and functions within the society in question.

Among the Timucua, the indigenous inhabitants of North Florida and southern Georgia, two-spirits had social roles and a manner of dress all their own, distinct from those of either men or women. Because of their great physical strength, they performed much of the heaviest physical labor. Some of their duties had a strong spiritual dimension. Two-spirits worked as healers who cared for the ill and women who had given birth or were menstruating. It also fell to two-spirits to ritually prepare the dead for burial.

Ossachite was never a Timucua town

Downtown Jacksonville is said to be built on the site of an ancient Timuquan village called Ossachite (Os-sa-chi-te). One source described Ossachite being as busy as a beehive and full of numerous storehouses, wood carvers, shell workers, and copper artisans. This story is so ingrained in local folklore that there is a historical marker about Ossachite at the intersection of Julia and Monroe Streets. There’s only one major problem with this story. It’s not true. There was never a Timucua town called Ossachite and it certainly wasn’t located where Downtown Jacksonville is today. The Timucua weren’t city-builders. At best, this tale stems from a bad piece of historical research conducted over a century ago.

The name “Cowford” comes from the Seminole 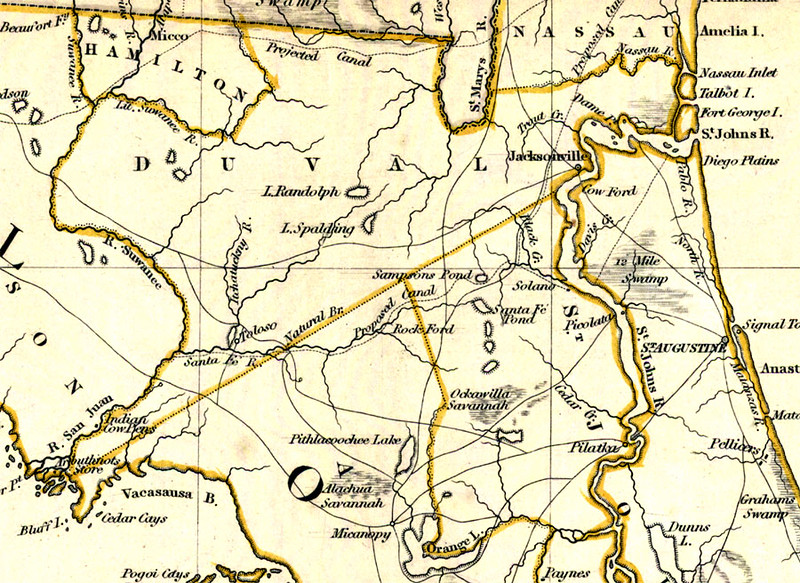 “Cowford,” or more usually “Cow Ford,” was an English name for the crossable part of the St. Johns River that dates to Florida’s British period (1763–1783). In 1765 British established a ferry crossing here for the King’s Road which ran between modern St. Nicholas on the south and Downtown Jacksonville on the north.

“Cow Ford” is an English translation of the Seminoles’ name for the crossing, “Waca Pilotiketa”, later written by English-speakers Wacca Pilatka. In the Creek language spoken by the Seminole, Waca Pilotiketa roughly translates as “cow crossing.” Visitors to the Cow Ford included John Bartram in 1766 and his son William Bartram in 1774.

The British name led to what’s easily the most pervasive legend about Jacksonville is that the city was originally a town bearing the rather undistinguished name of Cowford. While the Cow Ford was an increasingly important crossing at this time, the small community living nearby was no town. In fact, for years most activity, including the ferry, focused on the south side of the river. In 1822, area landowners led by Isaiah D. Hart donated property to create a new town on the north bank. In June of that year (the exact day is lost), they surveyed the 20 blocks that would become Jacksonville. If anyone ever conceived of calling this new town Cowford, they must have thought better of it very quickly, as the founders signed a petition on June 15 asking that their town of Jacksonville, named for former military governor Andrew Jackson, be designated a port of entry.

Popular history is often averse to nuance, and over time the phrase the Jacksonville area was previously known as the Cow Ford became Jacksonville was previously known as Cowford. In the 20th century this ostensible town of Cowford became embedded in the local imagination. Today, it survives in the names of numerous local businesses and institutions, such as the American Cancer Society’s annual Cowford Ball and improv troupe Mad Cowford.