324 North Broad Street and adjacent storefronts, along with the Masonic Lodge and Richmond Hotel, combine to form nearly 400 linear feet of historic buildings still surviving as a part of what was the black side of Downtown Jacksonville during the Jim Crow era. Today, they provide us with the only remaining visual example of what LaVilla’s urban density resembled during its heyday at street level. In 1910, the black owned National Mercantile Realty & Improvement Company was located at 324 Broad Street (center building in photo above). By 1930, a local market chain owned by Clarence Saunders operated a market on the ground floor. The building was acquired by the City of Jacksonville in 1994 for $34,000. Since that time, the building has fallen into great despair.

The Universal-Marion Building is another large Mid-Century building with a history worth preserving. Designed by Ketchum & Sharp, the 268’ tall, 19-story tower was the tallest building on the Northbank and second tallest in the city when it was completed in 1963. It was also one of a handful of buildings in Florida to feature a revolving rooftop restaurant. The 250-seat Ember’s Restaurant was said to be the largest revolving restaurant in the world, rotating 360 degrees every 1.5 hours when it opened in 1964. The complex also included a six-story, 180,000 square foot J.B. Ivey & Company department store and a parking garage that once included a Purcell’s Womens department store on the ground level. The building’s original premier tenant was founded by Louis Elwood Wolfson. The firm co-financed the production of Mel Brooks’ first movie, The Producers, which won an Oscar and later became a major Broadway play. It also funded Woody Allen’s first movie, Take the Money and Run.

Now in the process of constructing a new headquarters, JEA intends to attempt to sell the Universal-Marion Building. While the mid-century mixed-use office and big-box retail complex may not be of significant value to JEA, the building is an important part of Jacksonville’s urban landscape that’s worthy of being seriously considered for adaptive reuse as opposed to demolition.

The Fraternal Order of Odd Fellows is one of many currently unprotected buildings in downtown worthy of a local landmark designation. According to James Weldon Johnson, the Odd Fellows lodges were made up of white collar workers while the local Masonic lodges recruited largely from stevedores, hod carriers, and lumber mill and brickyard hands. Located at the southeast corner of State and Cedar (now Pearl) streets, the Odd Fellows Hall was designed as a three level building with retail on the ground floor.

Built right after the Great Fire of 1901, this is where the Cookman Institute held its graduation ceremony in 1907. A young A. Philip Randolph, the class valedictorian, gave a speech he called “The Man of the Hour.” Randolph would later organize the Brotherhood of Sleeping Car Porters, the first predominantly African-American labor union and the March on Washington in 1963.

In March 1912, Booker T. Washington, co-founder of the National Negro Business League and key proponent of African-American businesses, visited Jacksonville as a part of his Florida tour. Here, he attended a banquet held for him after arriving in town by special train. In later years, Zora Neale Hurston also performed at the Fraternal Order of Odd Fellows. Currently vacant, in recent years this building was occupied by River Region Human Services Inc.

In later years, it was the location of a Green Book site, the Sunrise Restaurant. The restaurant was located inside George D. Wood’s Independent Furniture Company store on the ground floor of the Fraternal Order of Odd Fellows Hall. Wood was the president of the Mount Olive Cemetery Association and owner of the furniture store and the Durkeeville Apartments.

LaVilla’s red district originated in early 1887 as a result of Jacksonville mayor John Q. Burbridge chasing most of the city’s prostitutes to the suburb of LaVilla. Burbridge’s efforts were thwarted when Jacksonville later annexed LaVilla. With the January 1897 opening of Henry Flagler’s Jacksonville Terminal Company passenger railroad depot, LaVilla was rapidly engulfed in development, resulting the red light district growing and ultimately becoming known as “The Line”. In 1900, the district, then home to more than 60 bordellos on four blocks of Ward between Lee and Bridge streets. While The Line paved the way for LaVilla’s development into an early epicenter of ragtime, blues, and jazz, excluding 801 West Forsyth Street, its bordellos, flop houses, and saloons have been razed over the years.

Located on the corner of West Forsyth and Madison streets, this building once housed a saloon in the red light district that was owned and operated by black red light district businessman George Stevens. It later became the base for Bork & Sons, a bed springs company and the Southern States Iron Roofing Company. An adjacent structure, 825 West Forsyth Street, dates back to 1902. In 1915, the Jax Chero-Cola Bottling Company operated out of the structure. Chero-Cola was founded in 1905 as the Union Bottling Works by Claud A. Hatcher in Columbus, GA. Hatcher’s first beverages were named Royal Crown, a ginger ale and a cola called Chero-Cola. In 1912, the company’s name was changed to Chero-Cola. Over the years, the company’s name has changed and it is now known as Royal Crown Cola International.

This site was the original location of the Stanton Normal School, which opened in April 10, 1869. The school was named in honor of General Edwin McMasters Stanton, an outspoken abolitionist and Secretary of War under President Lincoln during the Civil War. In 1877, President Ulysses Grant visited the school during a tour of Florida. During the visit, a six-year-old student named James Weldon Johnson raised his hand from the crowd and Grant shook it. Johnson would go on to become the school’s principal in 1894, and expanded it to become the only high school for African-Americans in the city. While serving as the principal, Johnson wrote “Lift Every Voice and Sing,” which his brother Rosamond put to music. This song would later become known as the Negro National Anthem.

The Johnson brothers relocated to New York City in 1902. James Weldon Johnson becoming a nationally famous songwriter, author, poet, diplomat, and civil rights orator. As a result of one of the first civil-rights litigation cases in Jacksonville and the South, the existing building was constructed in 1917. In 1953, this school was replaced by a newer facility in the nearby Durkeeville neighborhood. It then served as the Duval County Vocational School until closing in 1971. 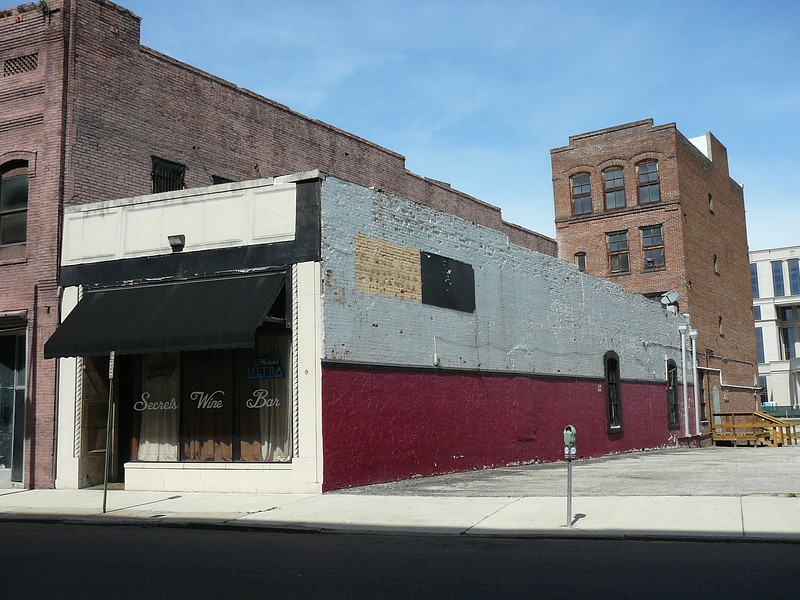 In 1910, this four story brick building was built as a dairy for Charles Sumner’s W.P. Sumner Company. Sumner specialized in butter and cheese products. In 1920, five years after Sumner’s death, the building was acquired by Jefferson Richard Berrier and converted into an Ice Cream factory. The J.R. Berrier Ice Cream Company was known for its mammoth-sized, multi-flavored shakes, which were called Spinning Wheels. Although, Berrier’s manufacturing operations ceased for good in the 1950s, the family operated a chain of soda fountains in Jacksonville until 1970.