Baymeadows residents clash over who should pay to fix their roads 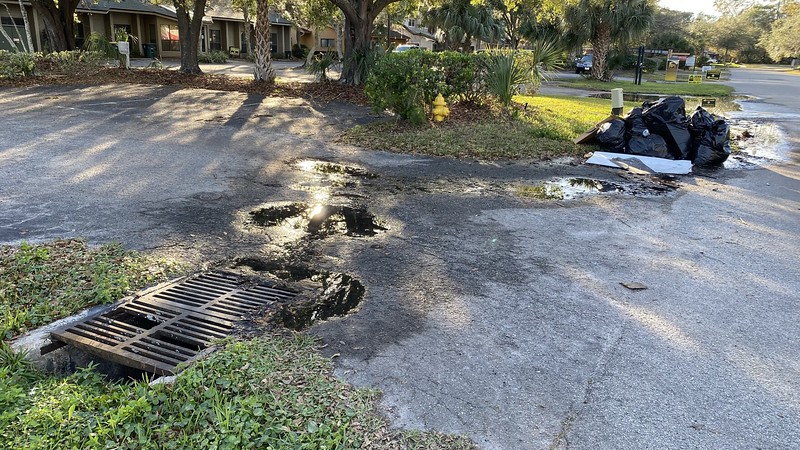 A plan to charge Baymeadows property owners an extra fee to fix up privately owned roads is heading toward a Jacksonville City Council vote.

But the proposal is facing backlash from a group of Baymeadows residents in newer neighborhoods that don’t have the same infrastructure qualms as older ones.

Councilman Danny Becton is pushing for the extra fee for property owners. It’s a move that might be unexpected from the longtime Republican, but he argues that unlike property taxes, these funds will stay in the neighborhood, with community control over how they’re spent.

“I’m comfortable with this because it’s neighbors trying to help themselves,” Becton said. “It’s not going into a big, unlimited pool of a budget that can be spent on anything and everything.”

Becton’s been working on the proposal for years, alongside developers and the nonprofit Baymeadows Community Council, which is made up of a group of representatives from the network of homeowner associations that own the roads in the southwest Jacksonville community.

Their plan is to fund road repair and stormwater improvements by creating the Baymeadows Community Improvement District (BCID), a special district under Florida law that has its own board of supervisors.

Property owners would pay an annual fee; a new board would make a budget; City Council would give its approval; and the special district could pay for infrastructure improvements.

The proposal sets maximum rates property owners would be charged: up to $500 a year for single-family homes and up to $2,500 annually for large business buildings. Those rates could be lower depending on what the district’s board decides are its priorities, according to Danny Becton.

But a vocal group of opponents say they don’t want to be forced to pay for their neighbors’ problems.

Patrick Strycharz is a new resident to Baymeadows. He purchased one of the new townhomes in Baypointe about a year ago. He said the roads in his new neighborhood are fine and it shouldn’t be his problem that older neighborhoods have failing infrastructure.

“They’ve been complacent in this matter,” Strycharz told the City Council on Tuesday. “That’s not my problem. That’s their problem.”

Proponents for the district, like resident Maureen Elise Devlin, countered that the planned improvements affect everyone.

“When the stormwater system fails, your new home will flood just as readily as mine,” Devlin said of opponents living in the newer neighborhoods.

Devlin, and others, told City Council they didn’t know the roads leading to their homes were privately owned until after buying their houses.

Councilman Danny Becton agrees that failing infrastructure is not the fault of residents’ complacency, but a byproduct of the outdated standards in place when the community developed in the 1970s and 80s.

“The community’s responsibility and the condition of their infrastructure would never be allowed to exist today in this independent fashion based on today’s Neighborhood Development Standards,” Becton wrote in a summary of the plan.

“Infrastructure assets are set up to fail and to become a maintenance nightmare within a dysfunctional coordination of private parties,” the summary reads.

The roads in the newer developments in the neighborhood are up to city standards, but the upkeep of those new roads still isn’t the city’s responsibility. That’s part of why builder DR Horton is supporting the plan.

“The real reason that we need the improvement district is there is no mechanism in place, if there is a pothole or a failure or a flood on Baymeadows Circle, east or west, there isn’t anybody that is in charge of fixing it,” senior vice president of DR Horton Bob Porter said. “They are owned by half a dozen or a dozen different communities.”

DR Horton purchased the former Baymeadows golf course about 15 years ago and has since sold part of its property for developers to create Baymeadows Park, a commercial shopping and dining center.

Baymeadows Park Drive is one of the roads that would become the responsibility of the proposed special district, meaning the local homeowners would be helping pay for the roads in front of the new businesses.

That’s made some residents skeptical about whether they stand to benefit from the special district as much as developers do.

The proposal to create the special district doesn’t define the priority of infrastructure improvements, that will be up to the district board to decide.

Danny Becton said it’s a solution that could be replicated elsewhere in the city for infrastructure improvements. Special districts in Jacksonville have primarily been created to fund waterways projects in the past.

“One of the things that I feel like we’re also paving the way for, there are lots of areas in our city that are in identical conditions who could utilize this type of tool to help revitalize their neighborhood.”

But for now, he and a group of residents who toted light blue “Vote Yes! Baymeadows Community Improvement District” T-shirts before City Council are working to convince their neighbors that paying the extra fee is in everyone’s best interest.

The proposal is moving ahead in City Council committees and will likely face a full vote in February.

Article by Claire Heddles originally published by WJCT News. Claire joined WJCT as a reporter in August 2021. She was previously the local host of NPR’s Morning Edition at WUOT in Knoxville, Tennessee. During her time in East Tennessee, her coverage of the COVID pandemic earned a Public Media Journalists’ Association award for investigative reporting. You can reach Claire at (904) 250-0926 or on Twitter @ClaireHeddles.