The “Three C’s” of urban revitalization

Combined, the 14 infill and adaptive reuse projects below will add 272 hotel rooms, 650 residential units and activate 125,000 square feet of retail/dining and 240,000 square feet of office space in Jacksonville’s Downtown Northbank. Of interesting note, all 14 projects are within a three block radius of James Weldon Johnson Park. This is a real life example of clustering complementing uses within a compact setting, a concept long promoted by The Jaxson as a surefire way to quickly activate the urban core. 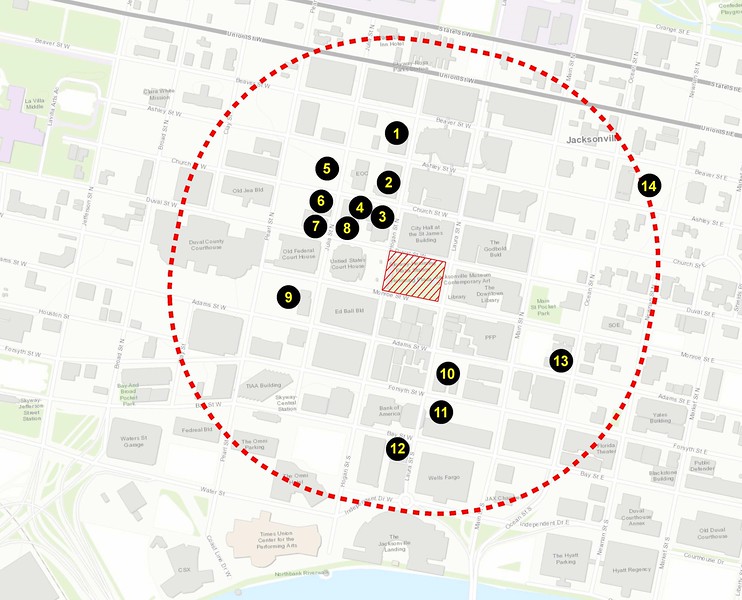 EJPC LLC acquired a 1.38 acre block with 30,000 square feet of buildings formerly occupied by the Gulf Life Insurance Company from the First Baptist Church in early 2020. EJPC intends to invest $25 million to adaptively reuse the buildings and construct 200 apartments on the rest of the block surrounding them.

Ace Jax LLC. intends to develop the 7-story, 39,000 square foot Jones Brothers Furniture building into a mixed-use project featuring 28 apartment units along with a coffee shop at street level. In addition, the project includes the restoration and conversion of the former Western Union building next door into 9,600 square feet of retail and dining space.

Completed in 1922, the Federal Reserve Bank Building is notable for being designed by Henrietta Dozier, Jacksonville’s first woman architect. Vacant for decades, the building was recently acquired for $1.75 million by JWB Real Estate. JWB intends to convert the building into a mixed-use development that will include two restaurants in 7,400 square feet of space and 9,000 square feet of event space. A parking just south of the building will be redeveloped into a centralized outdoor courtyard and seating area for the Old Federal Reserve Bank, Seminole Club and Florida Baptist Convention buildings. Civil plans for the project were filed in December 2020. JWB hopes to start the renovation in the third quarter of 2021. Combined, the Old Federal Reserve Bank and Florida Baptist Convention Buildings are estimated to cost $16 million to bring back to life.

Completed in 1924, the First Baptist Convention Building is notable for being the last office building in Downtown Jacksonville designed by Henry John Klutho. JWB Real Estate Capital intends to convert the building into a mixed-use project that will include 24 apartments, two 2,000 square foot restaurants and 1,147 square feet of retail space. Civil plans for the project were filed in December 2020. JWB hopes to start the renovation in the third quarter of 2021. Combined, the Old Federal Reserve Bank and Florida Baptist Convention Buildings are estimated to cost $16 million to bring back to life.

The Thomas V. Porter mansion was designed by architect Henry John Klutho as a private residence and completed in 1902. It was acquired by JWB Real Estate Capital in August 2020. JWB plans to restore the building to contain 16,000 square feet of office space. A 1,272 square foot basement will be reserved for restaurant space when the market can support it. A permit to begin initial interior renovations for the $600,000 project is currently under review.

Associated with St. Augustine-based Augustine Development Group, Axis Hotels, LLC. intends to renovate and restore the former Ambassador Hotel into a $15 million, 127-room La Quinta Inn and Suites boutique hotel with a rooftop bar. The hotel will be managed by Integrity Hospitality. Interior demolition one the project is complete and work is anticipated to be done in conjunction with the redevelopment of the adjacent Independent Life Building.

The Augustine Development Group has plans to move forward with the adaptive reuse of the former Marine National Bank, along with the construction of a new 8-story apartment building and parking garage. Originally completed in 1927 as the Jacksonville Chamber of Commerce, the 3-story building at 404 North Julia Street would be retrofitted to contain 36 residential apartment units and 3,240 square feet of ground floor commercial space. A new building with 103 apartments and a 487 space parking garage would be built behind the Marine National Bank and Ambassador Hotel. The garage would also serve the Ambassador Hotel and Independent Life adaptive reuse projects.