A Ponzi scheme is a fraudulent investment operation that pays returns to its investors from their own money or the money paid by subsequent investors, rather than from profit earned by the individual or organization running the operation. Today, most don’t know that the man who gave the Ponzi scheme its name, was a Jacksonville resident.

Carlo Pietro Giovanni Guglielmo Tebaldo Ponzi was born on March 3, 1882 in Parma, Italy. In 1903, having gambled away most of his life savings during his voyage to America, he arrived in Boston with $2.50 in cash and $1 million in hopes. He spent his first few years in the country working small jobs around the East Coast including being sign painter in Jacksonville.

After serving time for forging a check and smuggling illegal Italian immigrants across the border, Ponzi moved to Boston, founded the Securities Exchange Company, and quickly schemed millions from investors. After serving four years in prison, he was indicted on 22 charges of larceny by the State of Massachusetts and sentenced to an additional seven to nine years. Out on bail, Ponzi fled the state and set his eyes on Jacksonville.

At the time, Florida had become a real estate moneymaking dream for speculators and Ponzi wanted his piece of the pie. Looking to make quick cash, under the alias of Charles Borelli, he and his wife, arrived in Jacksonville on September 28, 1925, residing 1331 Main Street in Springfield. Then he established the Charpon Land Syndicate, offering investors a 200% profit within 60 days. Unknowing to many, much of the property was 65 miles west of Jacksonville in rural Columbia County. Some of it was even under water.

Ponzi made his first sale on November 9, 1925, six weeks after arriving in Jacksonville but his stay would not be long. Soon he was arrested for failing to file proper papers and selling certificates of indebtedness without permission. In February 1926, he was indicted by a Duval County grand jury, charged with violating Florida trust and securities laws. Not wanting to spend time in a Jacksonville prison, Ponzi grew a mustache, shaved his head, faked a suicide, and skipped town in an attempt to return to Italy. Eventually, he was caught and arrested in New Orleans before leaving U.S. territorial waters and returned to Boston to serve his sentence in the Massachusetts State Prison.

John Hysler was gunned down during a moonshine run on the Acosta Bridge in 1928.

In the early 20th century, the Hysler family was known for committing several crimes during and after the Prohibition. Tom Hysler, a different John Hysler, and Dan Hysler, were all convicted or arrested of murders during the early 1920s. Their smuggling network was so significant, in March 1930, Al Capone visited them, staying with Jim Hysler. In later years, nephew Clyde Hysler was electrocuted for killing Mr. and Mrs. John H. Surrency during an attempted robbery in 1937.

To law enforcement, the Hyslers were Jacksonville’s bootlegging version of Al Capone’s syndicate. To family members, they were just good old boys trying to make a living. In particular, John B. Hysler, brother of Tom and Dan Hysler, quickly emerged as one of Duval County’s most notorious bootleggers. From the day Prohibition started, John B. was involved in bootlegging. Soon he became known as the “Liquor King,” “Liquor Czar,” and “Whiskey King” of Jacksonville. Due to police corruption, the Lackawanna resident had evaded the law for years.

Unfortunately, John B. Hysler’s rabbit’s foot lost its mojo on September 26, 1928. On the way back to Jacksonville from picking up illegal hooch that came ashore in Mineral City (present day Ponte Vedra Beach) from Rum Row, Hysler was confronted by dry agents on the Acosta Bridge. Details of what went down are unknown but when it was all over, John B. Hysler was slain and dry agent Hope King was hospitalized in critical condition. 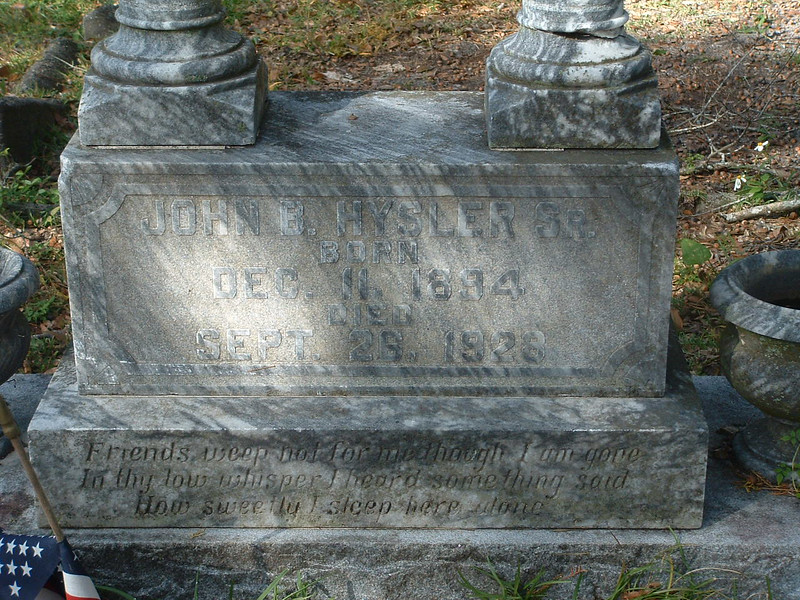 “You mean you really have not heard about what happened to John Hysler today?”

The owner shook his head, put the $5.00 in his pocket and leaned in a little closer to the reporter who told him,”He’s dead”.

The owner turned and yelled to his short order cook, “Oh my God. Hey Mert, come out heya. Johnny’s dead!”

A sweat covered fellow popped his head around the door way and said,”Ya kiddin’? Dead? How? He was here this mornin’ for some scrambled eggs and calves brains…”

The thought of that delightful breakfast dish made the meatloaf he half scarfed down not so bad after all to the newsman.

“Two Probbies got him… the prohibition agents …from Jacksonville.They got word he was to be running red whiskey up to Jacksonville. They shot him on the St. Johns River Bridge. Seems they don’t know who shot first. Agent King or Hysler. They both emptied their guns. The agent was hit in the chest and ankle but kept firing his 45 automatic. Hysler was hit in the shoulder, twice in the neck and twice in the chest. He was alive when Agent Eaton got him to St. Vincents hospital, but he died about 7 tonight.”

The reporter looked over at the cook,who still stood by the door. He was wiping away what seemed to be tears. “He was a good joe,ya know? So he ran some shiner around these parts. Folks gotta survive. Them yankees pay real good money for that Cuban rum I hear. Shoot, he even was bringin’ in some real classy folks– some of them Italians from Chicago. ‘Member that boss? That flashy guy named Al?”

The reporter perked up. “I heard the Hysler boys were in business dealings with Al Capone”.

Mert just shook his head and backed into the kitchen, “He was just a real good joe.”

Days later, the funeral for John Hysler was the most anticipated quasi-social event of the decade. Almost 1,500 upstanding “law abiding” citizens packed the funeral.

Flower arrangements from some of the nations wealthiest flowed from the building into the street. Cops, lawyers, politicians were all there… as pallbearers.