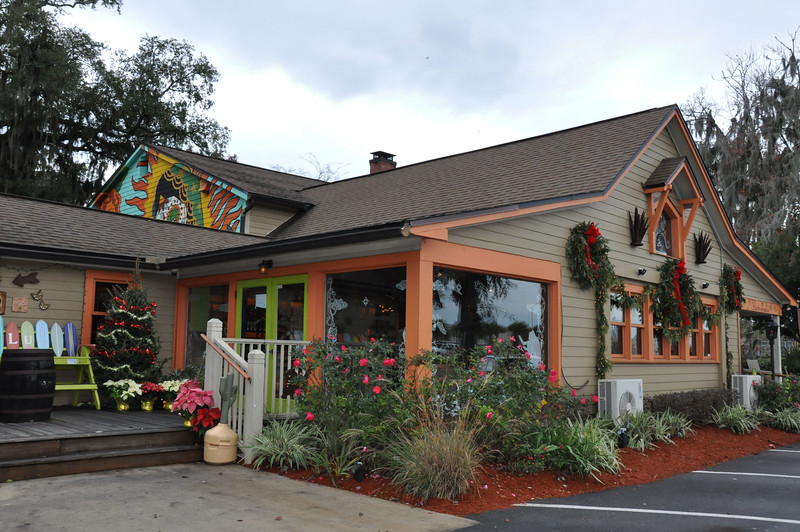 The living aren’t the only ones enjoying the dishes being served inside Taco Lu’s 81-year-old two-story log cabin. Over the years, bartenders and other employees have claimed the place is haunted by the ghost of Alpha Paynter.

Paynter once operated a boarding house in the cabin and is buried behind the building. It is said her apparition has appeared near the huge limestone fireplace in the center of the main dining room and in other parts of the restaurant. Paynter has been seen so much that the building is now listed in The National Directory of Haunted Places.

The next time your chips disappear, don’t be so quick to blame the diners next to you.

Evergreen Cemetery is the oldest fully operating cemetery in Jacksonville, with the first burial occurring in 1881.

The cemetery comprises 170 acres and over 70,000 burials. When the cemetery opened, remains were moved there from the Old City Cemetery and another downtown area near State Street. At one time, Evergreen had a train depot for visitors from the city and holding vaults nearby awaiting bodies for burial.

Evergreen is said to be haunted by several spirits, including the “Lady in Violet,” a man in old-fashioned attire near an unmarked mausoleum, and the ghost of a woman near the “Ugly Angel” tombstone.

Established in 1852, the Old City Cemetery on East Union Street is one of the most overlooked and underrated historic sites in Jacksonville’s urban core. Cut off from downtown by the Mathews Bridge Expressway ramps, the cemetery is home to a who’s who list of early 19th-century Jacksonville settlers and residents. One is Marie Louise Gato, the 19-year-old daughter of local cigar factory owner Gabriel Hidalgo Gato. She was shot five times as she was entering her father’s house in North Springfield on April 20, 1897. On her deathbed, she accused her spurned boyfriend Edward George Pitzer. A week later, the police lieutenant investigating the case was attacked and murdered near the corner of Liberty and Phelps streets.

Attracting a horde of female admirers, Pitzer’s two week trial became one of the most sensational murder cases in the city’s history. Pitzer was eventually found not guilty and Gato’s murder was never solved. Over a century later, some claim they have encountered the sounds of weeping, spooky lights, and the ghost of the young lady buried near the back of the cemetery.