Platted in 1868 by Miles Price on a portion of the former Dell’s Bluff Plantation, Brooklyn quickly became a centralized destination for formerly Gullah Geechee people and their descendants. As a result, in 1875, Price platted the adjacent community of West Lewisville as an expansion of Brooklyn. Despite the erasure of many historic buildings and continual change brought on by gentrification, Brooklyn is still home to a number of sites of deep significance.

Here’s a look at some of Brooklyn’s significant locations and the stories they tell about Jacksonville’s Black history.

The Allen Chapel A.M.E. Church is an example of an important cultural landmark found in what was once a vibrant Black community. It is one of the last surviving buildings in the Campbell’s Addition section of Brooklyn. Largely destroyed by the construction of Interstate 95 and urban renewal, Campbell’s Addition was a neighborhood on the north bank of McCoys Creek adjacent to the original plat of Brooklyn.

The Allen Chapel A.M.E. congregation was organized in 1905 under the leadership of Reverend Enoch White, former porter and driver for the Harkisheimer Company. Originally located at 1226 Ives Street near the intersection of Ives and Harper Streets, the church soon moved to a location on Ernest Street. In June of 1923, the congregation purchased the current site at 1529 Swan Street and a building permit was issued to construct the current structure in 1924. The Allen Chapel A.M.E. Church was designated as a local landmark in 2019.

Jacksonville during the Civil War was a hotbed of Union sentiment, with many White citizens and virtually all African-Americans supporting the U.S. cause. The Union occupied Jacksonville four times and held the town permanently after the last occupation in February 1864. A large portion of the Union’s soldiers were former enslaved who joined up to fight the Confederacy in order to secure freedom for their loved ones. After the end of the war, many veterans and their families stuck around and established Jacksonville’s earliest Black neighborhoods. One of these was located in the northwest portion of Brooklyn, which grew into a sizable Reconstruction-era African-American community.

Failing in its 2013 request to become recognized as a local historic district, much of the storied Gullah Geechee neighborhood has been erased from existence with the recent emergence of Brooklyn as a popular location for urban living. With gentrification in full effect, this boarded up and abandoned post-Civil War cottage, known somewhat anachronistically as the Buffalo Soldier House, is the last still standing. There’s no record of who built the house, but it predates the 1868 plat of the neighborhood, making it one of the few buildings providing a direct link with the city’s Reconstruction-era past.

Once a popular neighborhood park, Forest Park Center tells a tragic story of how city zoning rules were employed to disadvantage Black neighborhoods in the era of Jim Crow. As Richard Rothstein wrote in his book The Color of Law, segregated cities often zoned Black neighorhoods to allow for toxic uses such as industrial sites and waste disposal that were explicitly not permitted in White neighborhoods. The Black section of Brooklyn was one area that saw substantial industrial development. In 1910, the City of Jacksonville established the Forest Street Incinerator on a site between Forest Street and McCoys Creek, which burned the city’s solid waste and stored the ash and residue immediately adjacent to homes and Forest Street Park. Similar facilities were built at what are now the MaliVai Washington Youth Foundation complex in Durkeeville and Lonnie C. Miller Regional Park in the Northwest Jacksonville neighborhood of Riverview.

Despite this, Forest Street Park served as a central recreational space and school site for the Brooklyn and West Lewisville communities for many years. In 1940, the Forest Park Community Center was constructed for the Junior Optimist Club of Jacksonville by the National Youth Administration (NYA), one of President Franklin D. Roosevelt’s New Deal programs. Organized in 1938 at Forest and Post streets, the club included the two-story clubhouse, a baseball diamond and protective fencing surrounding the property at Forest Street Park. The purpose of the Junior Optimist Club was to instill the value of volunteering in young boys. By the time the NYA program was discontinued in 1943, the two-story building was also identified as a City Recreation Department building and also being home to the Jacksonville Miniature Car Racing Association and Jacksonville Model Airplane Club.

The NYA provided work relief and employment programs for 16 to 25-year-old-high school graduates or drop-outs whose families could not support them. The Forest Park Community Center was one of the rare buildings created by the program, which was more directed towards job training and developing work experience. At the time, the NYA program for African Americans was coordinated nationwide by Dr. Mary McLeod Bethune, founder of Bethune Cookman University in Daytona Beach. Bethune was appointed as the director of the Division of Negro Affairs in the NYA by President Roosevelt in 1936. Bethune was the first appointment of an African American female in the federal government. In 1954, the city built Forest Park Elementary School next to the incinerator.

The Forest Street Incinerator was shut down and demolished in the 1960s, and the site became part of the park. However, the severe pollution in the ground and nearby McCoys Creek remained. In 1999, the City of Jacksonville agreed to launch an investigation into the toxic site with the Environmental Protection Agency. The park, school and other surrounding uses were shut down, and the area was fenced off. The EPA worked to remove the pollution and return the site to use, and by 2019, 90% of the site was clean. Today, it is the site of the Jacksonville Classical Academy charter school and a future city park. The former Mt. Calvary Baptist Church is one of the largest 20th-century buildings still standing in Brooklyn. It serves as a reminder of a time before demolition and gentrification when Brooklyn was a vibrant neighborhood.

Mt. Calvary Baptist Church held its first services in 1896. Among its members were a number of former United States Colored Troops who had fought against the Confederacy in the Civil War and subsequently were among the first to settle in Brooklyn. The current building at 301 Spruce Street dates to 1955 and was the work of James Edwards Hutchins. Hutchins was born in Blakely, GA in 1890. After arriving in Jacksonville, Hutchins was a carpenter with the Dawkins Building and Supply Company several years before establishing his own construction company in the 1930s. One of the few local African-American contractors that also designed their buildings, Hutchins was responsible for several African American churches and residences in the College Gardens and Durkee Gardens subdivisions.

The church commissioned the building under the leadership of Reverend William Hill. Completed in 1948, this sanctuary served the Brooklyn community until 1999, when Reverend John Allen Newman relocated the congregation from the neighborhood to new Northside location near Gateway Town Center. Newman recently made national news when he married Omarosa Manigault, a reality show contestant-turned-staffer in the Donald Trump White House who later became a critic of the president. 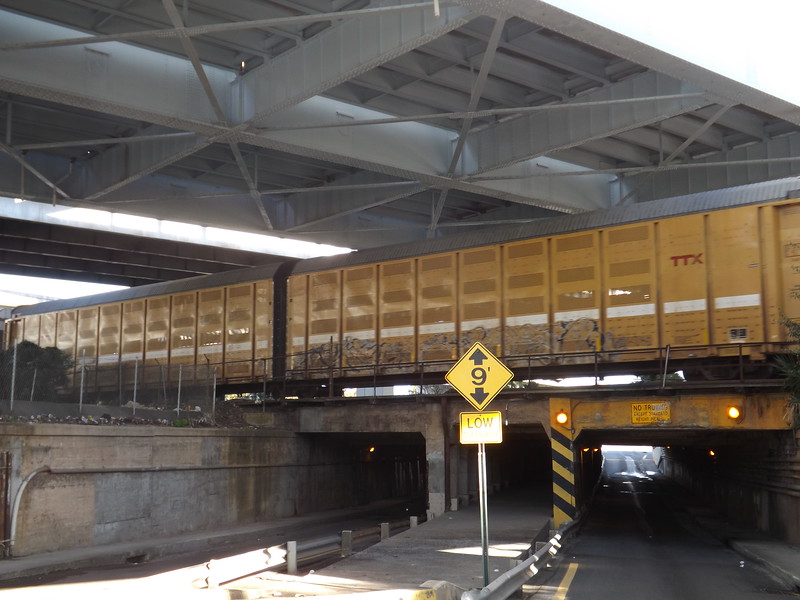 Tunnels in Florida are difficult to find, but hundreds of thousands of people drive over one serving Brooklyn without even noticing. Below I-95, the Myrtle Avenue Subway was constructed by the Jacksonville Terminal Company in 1909. At its peak, the Jacksonville Terminal was the largest train station in the country south of Washington, D.C. To serve nearly 40,000 trains carrying 10 million passengers annually, a series of large rail yards were developed west of the terminal to facilitate rail traffic.

The Myrtle Avenue Subway served as a grade separated connection for residents and workers who lived south of the terminal’s yards. The central section of the subway accommodated the streetcar line that connected Brooklyn and Campbell Hill with LaVilla and downtown Jacksonville. The opening of streetcar service with this structure served as a critical connection between Downtown Jacksonville and the booming streetcar suburbs of Lackawanna, Murray Hill and North Riverside following the Great Fire of 1901.