The Downtown Investment Authority (DIA) has approved a multi-million dollar redevelopment incentives package for the former Florida Times-Union site in Brooklyn. In doing so, it may have inadvertently locked the future of another downtown property into a suburban-style site plan that’s incongruous with what should be considered an urban environment.

In May 2021, Fuqua Development announced that it had put the entire site under contract with the intention of totally redeveloping it as part of the continued redevelopment of Brooklyn. Fuqua plans to raze all existing structures and parking lots on site, exposing and rechanneling McCoys Creek. The parking lot would also be torn up to expose and rechannel McCoys Creek and add a mix of new uses including a grocery store, retail storefronts and two apartment buildings with 271 units.

In August, the DIA had spoken about the One Riverside Avenue project as if it were a only conceptual plan. Time has since proven that despite being terribly suburban for an urban site, the development’s site plan is well beyond the conceptual planning stage. As mentioned in a recent Jaxson editorial, a site plan is the single most important element to get right at the conceptual stage. Mess up in this phase, and from a pedestrian scale perspective, the architectural design of the building facades won’t be able to overcome poor land planning.

The proposed One Riverside Avenue site plan in September 2021.

Considering a $31.59 million incentives package for the redevelopment of the former Florida Times-Union site has already been approved by the DIA, it is safe to assume that the horse has left the barn and that the project has passed the point of starting over from scratch. With that in mind, here are four minor tweaks that can be incorporated into the project to significantly enhance the pedestrian experience. 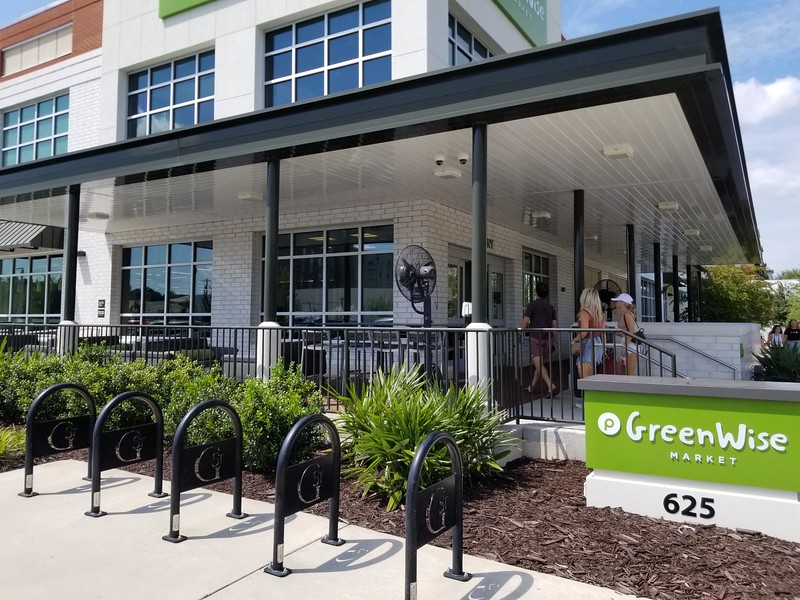 Publix GreenWise Market in Tallahassee is an example of a similar grocery store designed to face a street as opposed to a parking lot.

One of the major suburban elements of the proposed design is the amount of land area dedicated to vehicular movement. As in many car-oriented suburban strip malls, the considerable amount of space dedicated to parking and traffic circulation forms a pedestrian-hostile barrier between the grocery store and the rest of the ground level spaces within the development.

An easy option to address this problem is to shift the grocery store south to Leila Street, which has strong potential as a pedestrian-friendly corridor (more on that in a minute). The entrance of the grocery store could then be designed to enhance the pedestrian experience and feed Leila Street with additional foot traffic. Completed in 2018, the 29,000-square-foot Publix GreenWise Market at 625 West Gaines Street in Tallahassee is a good example of this site design concept. The building is adjacent to the street and the entrance is designed to enhance the pedestrian experience. Surface parking is located behind the structure.

This can be accommodated by eliminating the northbound free-flow right turn lane and reducing the curb radii at the corner of Riverside Avenue and Leila Street. Reducing the curb radii is not only a speed management strategy that improves pedestrian and bicycle safety, it also creates the opportunity to expand and wrap the building with outdoor cafe-style seating along Leila Street, better integrating the space with the rest of the development. It’s also something that should be done anyway as a part of a DIA road diet plan for Riverside Avenue.

An example of a quality pedestrian realm experience in the space between a retail building edge and major street in Coronado Beach, CA.

As proposed, the centralized parking garage features five different entrances. Consolidating vehicular circulation through the property will enhance the pedestrian experience throughout the development.

A major problem with the existing proposed site plan is that too much of the site is dedicated to automobile movement as opposed to the pedestrian experience. While this is common off Gate Parkway, it should be avoided in Downtown and the surrounding Urban Core. As proposed, the current plan includes a seven level parking facility with five separate entrances.

We recommend modifying this plan to eliminate one, or shift both, access ramps that are located south of the garage into the garage itself. Providing one garage entrance in the center of the development will improve pedestrian safety and vehicular circulation, as well as enabling more sidewalk and outdoor space along Leila Street between Riverside Avenue and the Northbank Riverwalk.

The Southside’s Tapestry Park is a local example where a project’s main street was designed to be much more than a view corridor through the property.

Leila Street can be much more than a view corridor overlooking the St. Johns River. Treat it as a pedestrian friendly main street that creates a cohesive pedestrian scale experience between the Northbank Riverwalk and Riverside Avenue. An additional retail, dining or publicly interactive space in the middle of the site would achieve this. Simple examples include the proposed inclusion of ground floor commercial space in the proposed apartment building, or converting the-weird shaped apartment amenity building into a commercial space.

The Oviedo Town Center in Central Florida is an example of a new infill project with commercial space integrated into multifamily buildings to activate the street level at key corners within the mixed-use development.

Regardless of the scale and height of the proposed buildings, the plan should Leila Street more like Tapestry Park and less like Tinseltown. Cluster the complementing ground level uses within the project along Leila Street to create a compact pedestrian-friendly setting that fundamentally ties the entire development to Riverside Avenue and the Riverwalk. In short, take advantage of the “Three C’s” of urban revitalization.

A modified version of the site plan incorporating the recommendations above. With these modest changes, the same project can become far more pedestrian-friendly and far less like a Gate Parkway-style suburban development.

Editorial by The Jaxson Magazine.