The country fell into an economic recession in the years following the construction accident. In the intervening years, multiple efforts to redevelop the property fell through, leaving residents and community leaders alike frustrated.

“As community developers and economic developers, we have been just as frustrated as everyone in Jax with the lack of progress Downtown and the constant failures of projects that have come forward,” said Park Beeler, a co-managing member of Jacksonville Riverfront Revitalization. “So we were determined to come forward with a plan that we know we can implement, that the city will be proud of, and that will create the kind of immediate opportunities of the residents of the near North side that have been long lacking.” 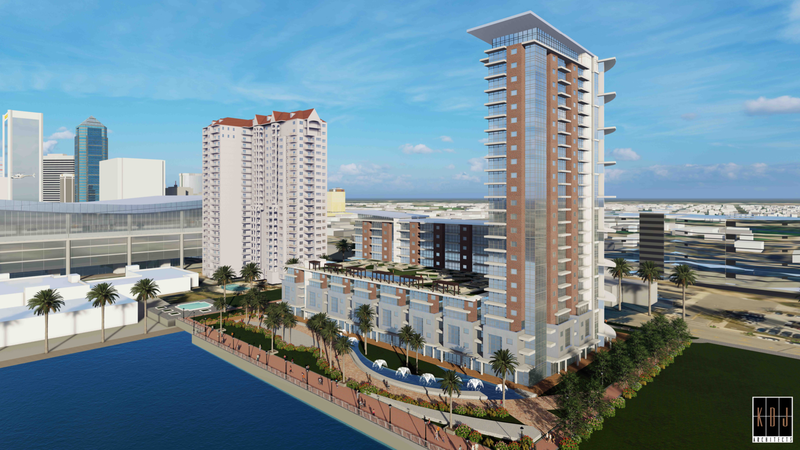 Beeler said he plans to present his vision for the project to the Downtown Investment Authority at its upcoming May meeting, where Boyer and the DIA board may offer the firm some incentives to ease the cost of development.

Boyer told WJCT News earlier that she’s eager to offer incentives for more grocery stores Downtown, although the City Council would need to approve that before such an incentive could be offered.

JRR is not seeking any upfront cash investments from the city of Jacksonville.

When asked about the risk of investing in a property directly in the shadow of Duval County’s jail, Council Member Aaron Bowman laughed and said, “No comment.”

But he continued, “It won’t be in our administration, but the jail is getting old, it’s in a location that really doesn’t support our vision of what the city looks like, and future administrations and future council members will be wrestling with that one.”

Article by Sydney Boles at WJCT.org. Sydney can be reached at sboles@wjct.org, or on Twitter at @sydneyboles.